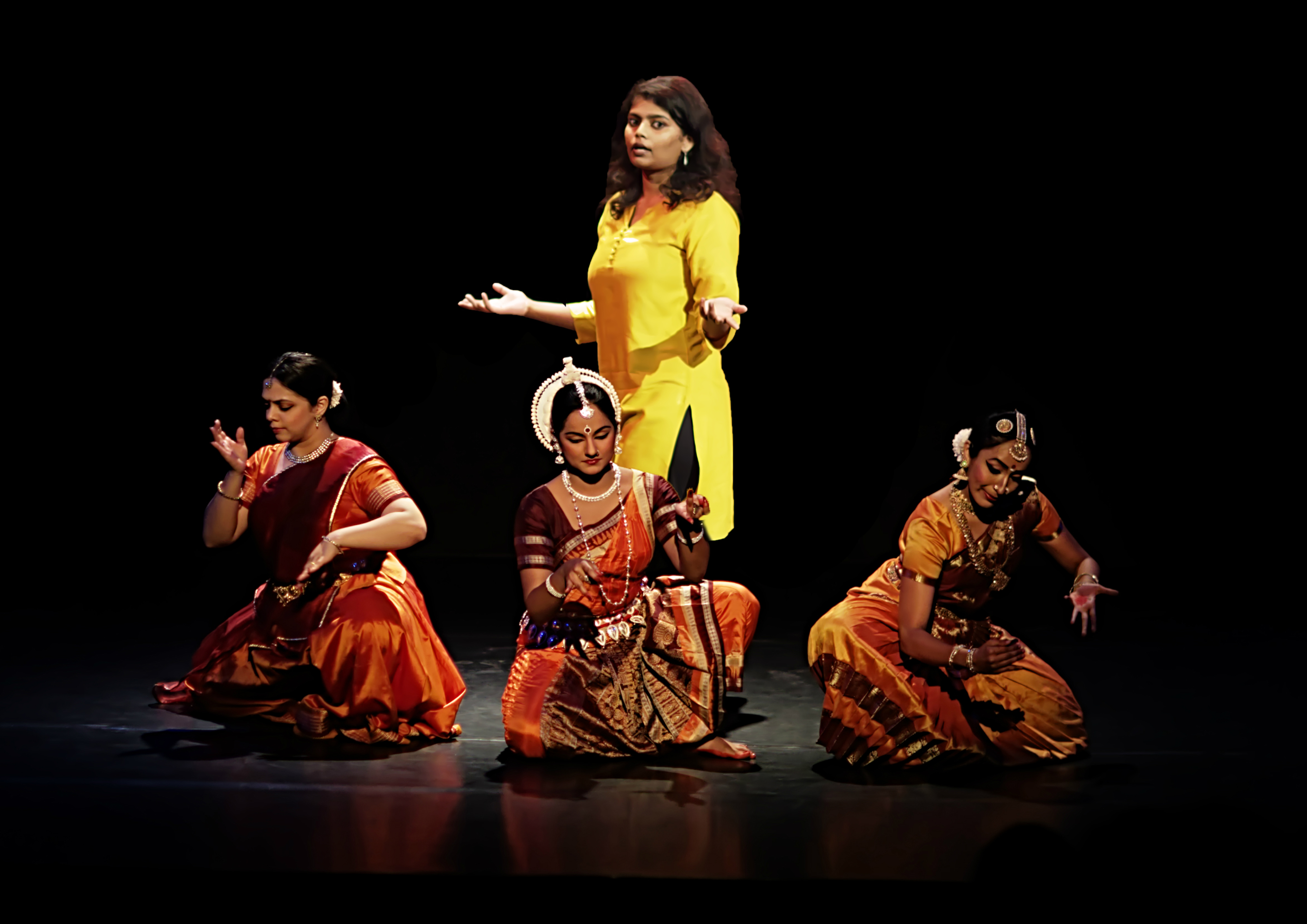 Mythology. A word that evokes varied emotions from different people. Also perhaps a word that probably has the most relevance in today’s times. And mythology is being used trying to bridge the gap between the past and present and the old and the new.  Anamika is an attempt to ask questions about why we still tell the stories of Radha and Krishna, or the Mahabharat, or even Bhakti literature, that were written centuries ago. It attempts to build a bridge between the ancient and the contemporary through drawing parallel stories through the eyes of a modern woman Anamika who finds similar stories, emotions and reactions in her own life. Preethi Bharadwaj, Pooja Pant, Lekha Naidu and Meghna Das come together to describe three mythological characters and a modern woman, Anamika, drawing parallels, asking questions and searching for her own version of Krishna. Anāmikā is a collaboration of theatre and three classical dances of India – Bharatanatyam, Kathak and Odissi exploring the characters of three women whose lives were touched by Lord Krishna.

The play is directed by Meghna Das who started formal training in Odissi at the age of four, she is now a soloist, faculty member and performer with the Nrityantar Academy for Performing Arts. “It has been an incredible journey so far and I am constantly amazed and what an ocean of knowledge, exploration, and growth it can be. I have produced three independent productions (Anamika was my first) under the label of the production company I founded,” says Meghna. Lekha Naidu who plays Anamika says, “she is as her name suggests a nameless every woman, who bridges the female experience over time and space from that of these oft remembered mythological characters. Have the questions and struggles a woman faces really changed over millennia? Who controls these stories? Why does the status quo go unquestioned be it in a thousand year old story or in yesterday’s newspaper or in your own kitchen? A lot of people mistake me to be the sutradharini, which I am not. Anamika the show plays with form and challenges how you look at classical story telling in more ways than one.” Preethi Bharadwaj who started learning Bharatanatyam when she was seven at Nrityakalamandiram, in Bangalore ventured into full time dancing when she was 21. “I play Krishna’s biological mother, Devaki in the show. One’s gain is someone else’s loss. One’s happiness is someone else’s sorrow. In the Kulasekhara Azhwar Paasuram that I dance to, Yashoda’s joyful reality becomes Devaki’s sorrowful train of thoughts. Devaki laments on losing out on the supreme joy of motherhood. She imagines how the smiling infant Krishna would have played with his toys, how he would have kicked with his tiny feet while being cuddled up in the cradle,” says Preethi.

Pooja Pant who started learning Kathak at the age of four has performed at various dance festivals across the globe. “In this production, I perform the story of Draupadi, a woman who was humiliated and let down by all who were meant to protect her,” says Pooja. She founded Pooja Pant Dance Company in 2016 working with an objective to explore, innovate and experiment with the traditional technique of kathak through solo, ensemble and collaborative works. As the founder of Akar Productions, Meghna hopes to continue to produce not only her own work, but the work of other young artists (classical and folk to be precise) who have great ideas that are just waiting to see the light of the stage. “There is a spectacular wealth of talent in this country in the form of curious, creative artists, who work every day to create work of so many different kinds,” says Meghna. This show promises to be an evening which is an ode to dance so make sure you do not miss your date with this one.