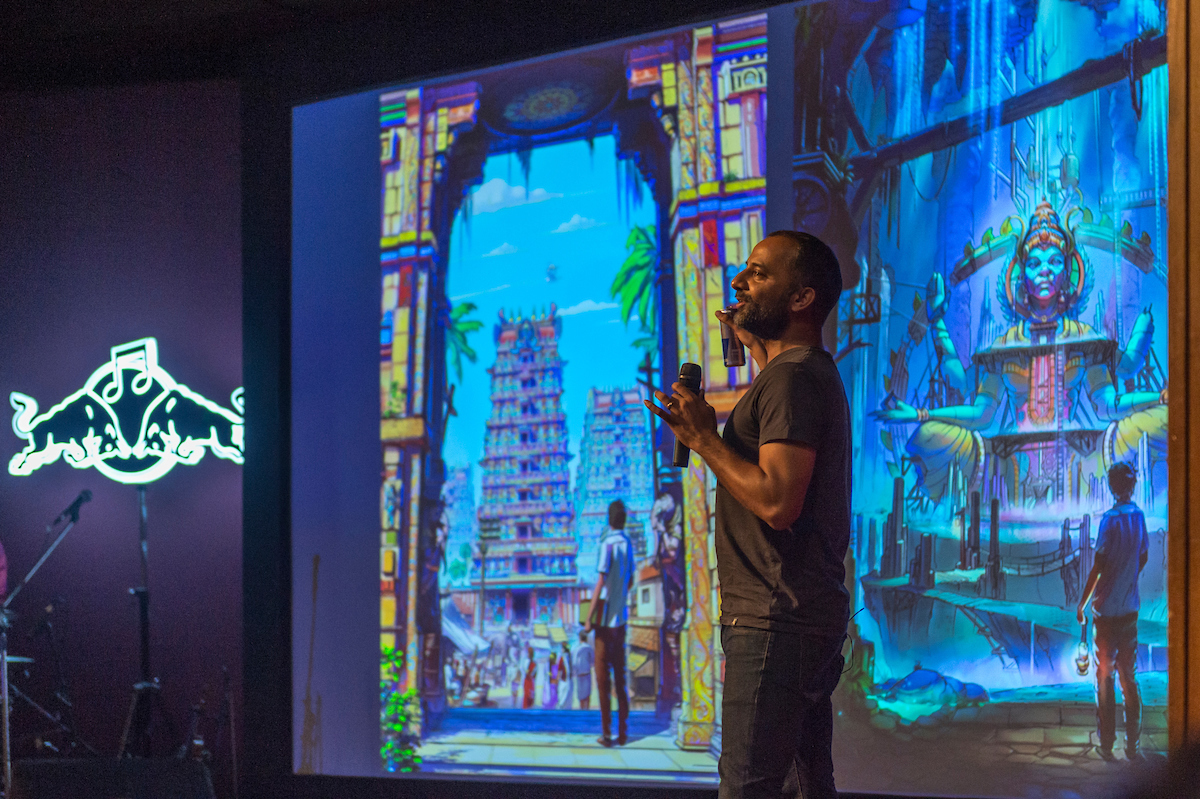 A stunning visual spectacle that combines Bharatanatyam with Carnatic-electronic music and visuals from the country’s first cultural adventure videogame may sound quite improbable but that is what makes this one special. Antariksha Sanchar, presented by Red Bull is India’s first fantasy Bharatanatyam dance opera and has been inspired by the magical cultures of South India and the dreams of math genius S. Ramanujan. The show is scored by a Carnatic-electronic ensemble and accompanied by stunning visuals from India’s first cultural adventure videogame.

The ensemble includes Hyderabad-based musician Sri Rama Murthy (Murthovic), visual artist Avinash Kumar (Thiruda) and the dance and choreography is by Bharatanatyam exponent Jayalakshmi Eshwar. What the audience can expect from this show is a novel combination of classical and modern forms of expression and artistic production. It is quite unusual for classical performers in India, especially those as experienced as Jayalakshmi Eshwar, to co-create a production with electronic musicians and video game designers. The Antariksha Sanchar Ensemble featuring Murthovic has strung together an exciting sonic journey that will be as much a pleasure to see translated by the dancers and visual artists.

Jayalakshmi Eshwar who started to learn dance more than five decades ago admits that working for this production opened her artistic thinking with respect to Bharatanatyam dance form to a broader spectrum and gave her the unique experience of working and adapting her skill with different multimedia artists. “You learn a lot about others’ dexterity. I realised that integrating the technology which is the main forte of the present generation could work as a great tool in making them understand effortlessly the great value of our tradition. Initially when Avinash Kumar approached me with this vague and complex science fiction project about Ramanujan titled ‘Antariksha Sanchar’ based on a video game, I was taken aback. I was skeptical since I did not have an experience of performing especially with animation, a DJ and also this sort of abstract story line. With reluctance I took up the project. Then the difficult task was to figure out the lyrics. So, I thought best would be to use Sanskrit lyrics – the language which has many Vedic references texts and a spiritual quality which is very essential for any fine arts of our culture.”

Murthovic who enjoys the vastness, fluidity and malleability to work without any boundaries says, “as the music director/composer with Antariksha Sanchar my role is to create an Indian contemporary/electronic sound palette for the Bharatanatyam dance troupe, wherein many beautifully choreographed dance sequence’s pilot the storyline. The music ensemble supports the story with a background score which consists of various Carnatic and electronic compositions. Working on Antariksha Sanchar has helped me broaden my horizon in music.” Avinash Kumar adds, “we are proud of creating a project with Red Bull that has a sense of evolution and progress each time we present it. For me personally, the project has provided a far deeper sense of collaborative creativity than all my years in the mainstream dance-centric electronica scene. Working with an experienced figure Jayalakshmi who has dedicated more than five decades to her creative endeavours with Bharatanatyam dance, is an inspiration and luxury in itself – there is so much to learn from the humility and everyday magnificence of an Indian teacher.” While Murthovic and Kumar are both seasoned electronica artists in the Indian scene, this project demanded a new skill set and attitude, and represented a collaborative challenge that required harmonising very different worlds and expectations. “We are working on the video game release of Antariksha Sanchar for 2020, but before that we have an India tour with our ongoing club centric production of Red Bull Presents Antariksha Sanchar – which will bring our story to life in a totally different, high energy nightclub setting. We are also releasing the graphic novel from the project in December in India and Mexico,” says Kumar.