The Begums of Bhopal make the city what it is which is a medley of sights and sounds like no other.

The first time I heard of Bhopal was as a child when the unfortunate gas tragedy happened. Even though I understood very little of what had happened, it somehow remained with me as something I associated Bhopal with. Many moons after when I visited Bhopal I was in for a pleasant surprise as what I was a city filled with lakes, abundant greenery and street art amidst is mosques and museums. However what is more intriguing about the capital of Madhya Pradesh is its tryst with royalty. And mind you, this is a state was ruled by women – the Begums of Bhopal whose rule has not just set a landmark in Islamic political history but has left an indelible impression on the city.

While the Nawabi legacy is mostly well known to all (thanks to Pataudi, Sharmila Ragore and now Saif Ali Khan), very less is known about Parmara Raja Bhoj after whom the city’s airport is named. The king who ruled the city in the 11th century, it is said that he built the Upper Lake or Bhojtal and the city has been named after him. A large statue of the king dominates the lake that is today a place where locals hangout especially in the evenings. After the decline of the Mughal Empire in the 17th century local chieftains called the Gonds ruled the city. Nizam Shah, ruler of Ginnur whose wife Rani Kamlapati was believed to be the epitome of beauty was killed by his kin Alam Shah. It is said that Rani Kamlapati who Alam thought drowned actually did not die but hired an Afghan, Dost Mohammad Khan to avenge her husband’s death and then ruled for a decade. It was after her death that Dost took over the reins of the city. His successor the fifth Nawab of Bhopal was Ghaus Mohammad whose first wife, Zeenat Begum rallied for the women of Bhopal and taught them to fight for their land and honour. It was Zeenat’s widowed daughter, Qudsia who went on to became the first begum of Bhopal in 1819. The 157 year old rule of the Begums is a testament of female empowerment and many of the monuments that you see in the city today have a connection with them.

The Begums were connoisseurs of art believed in negotiation and peace. The Taj-ul-Masajid that translates to crown of all mosques was built by Qudsia’s daughter Shah Jahan Begum. The pink hued structure has a large main hall, recessed archways, octagonal minarets, inter-arched roof, marble flooring and spacious courtyard is an architectural marvel. A stop at Moti Masjid built by Sikandar Jahan in 1860, a near replica of Delhi’s Jama Masjid is another must visit for its pearl white façade, golden spikes are red towers. A visit to Rani Kamlapati Palace on the banks of the Lower Lake is today in the midst of the Kamla Park and is maintained by the Archaeological Survey of India. Today there is an interpretation centre that talks of the Gond connection to the history and architecture of the Kamlapati Palace. The two stories structure has been built using lakhauri bricks and the cusped arches are supported on fluted pillars. For more royal history check out Gohar Mahal named after Qudisiya Begum, built in a typical Hindu Muslim architectural style way back in 1820. When I went here there was hardly anyone around and it took some cajoling for the caretaker to send a guide to walk me through the beautiful structure. Though largely dilapidated, this palace has beautiful paintings on the walls, beautiful doors and arches all around a central courtyard. Today it hosts the annual Bhopal Mahotsav which sees a congregation of artisans, craftsmen and folk performers.

The food of Bhopal is typical Mughal fare and has myriad influences of Hyderabad, Lucknow, Afghan, Malwa which lends it a character of its own.  Breakfast specials include Samawar, the salted tea, Sulaimani chai made in a copper vessel, poha and jalebi. When you are here sample the risalas, a chicken preparation with rich gravy and biryanis. Food cooked by the Bohra Muslim women in the Old Bhopal part of Chowk is well known too. Some must try dishes include qorma (braised meat in thick gravy, kebabs (minced meat fried or roasted over charcoal), bhujia (cooked vegetable), salan (a gravy of meat/vegetable), keema (minced meat), rice cooked with meat in form of pulao and dal pasanda. Apart from falooda try the gullati (rice pudding), kheer, muzaffir (vermicelli fried in ghee and garnished with saffron), shahi tukra (sliced bread deep fried and topped with sweet thick milk – garnished with dry fruits) and more to appease your sweet tooth. On my last day here I headed to Mahavir Giri a beautiful hillock that offers a bird’s eye view of the city. As I stood atop the hill overlooking the city with the wind blowing in my face I could not help but admire the Begums of Bhopal. After all they had accomplished what women today still struggle with by shattering the glass ceiling and creating a city that still holds on to its royal roots like no other. 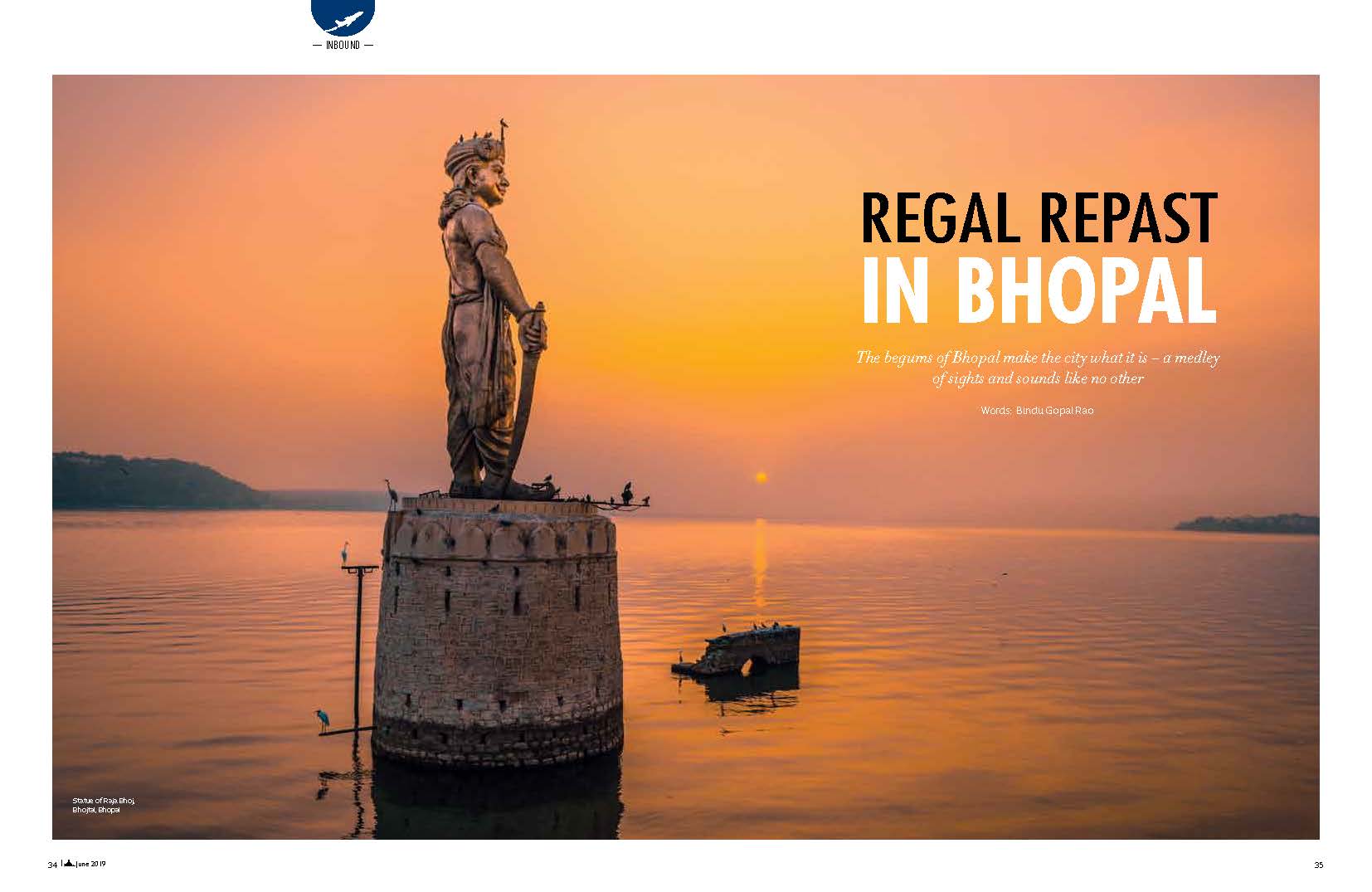 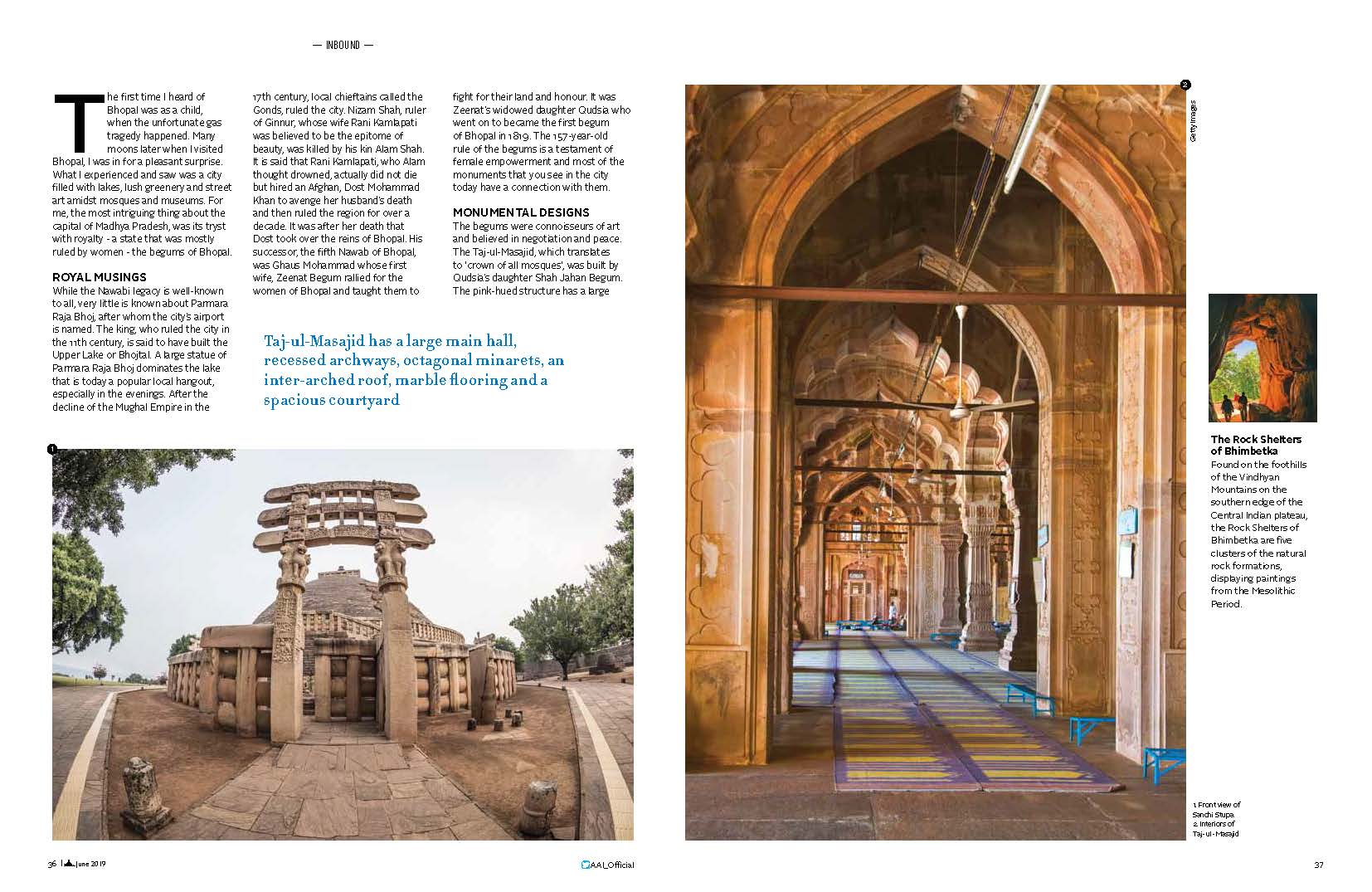