Cruising is fast becoming a great way to explore destinations that are all things exotic and nice as this cruise along the Panama Canal.

One of the modern wonders of the world the Panama Canal is often dubbed as the world’s greatest shortcut. And seeing the engineering marvel is best done on a cruise when you come up close with how the canals and the locks work. Additionally the cruise that takes a round trip around the Panama Canal will bring you to numerous sights in Colombia, the Caribbean, Jamaica and Mexico. A popular cruise trajectory, this round trip has myriad sights and sounds from different cultures that make the 14 days seem far shorter than they actually are. While several cruise liners operate on this path, I did this aboard the beautiful cruise liner Norwegian Pearl from the Norwegian Cruise Line (NCL) from Tampa. Interestingly each port of call has several shore excursions that you can take that allow you to see a place based on your area of interest. Here are some destinations that I explored on my 14 day cruise.

My first stop was at the Jamaican town of Ocho Rios and it was a larger than life poster of cricketer Chris Gayle that welcomed me to this part of Jamaica. A busy cruise port, Ocho Rios has a beautiful coast line that stretches on one end and is dotted with swanky beach resorts. It is said that Christopher Columbus had been ship wrecked here for over a year and there is his statue you can see here too. A must see place here is the Konoko Falls which apart from some amazing flora and fauna has a museum where you can get a quick tour of Jamaica’s history. The small two room space has several maps, pictures and old items on display that tell you a lot about the history of Jamaica especially its seven heroes. Incidentally Bob Marley was from here and you can see an LP record with his famed Redemption Song framed here. When you walk around this place you can see the national tree Blue Mahoe and even the national bird the Doctor Bird, apart from seeing various kinds of fish and colourful macaws. Ferns are an important part of the flora and a drive through the Fern Gully a road that connects to the capital Kingston is where you can see a whopping 500 varieties of ferns. Being a beach city, there are a plethora of beach activities that you can enjoy including adventure sports like river tubbing safari, zipline, Rainforest bobsled adventure and more. Jamaica’s highest point the Blue Mountains is at 7402 feet above sea level and is home to the famed gourmet Blue Mountain Coffee – a souvenir you can pick at a local store here. And if you loosen your purse strings this is where you can buy some of the best gemstones and diamonds too.

The Colombian ports of call on the cruise are Spanish colonies and the Spanish influence on them is naturally unmissable. Santa Marta for instance was established in 1525 by the Spanish and lies on the foot of the world’s highest coastal mountain range – Sierra Nevada de Santa Marta. The best way to explore this colonial town is to head to Plaza de la Cathedral, the central square of the city. This is where you can see the Santa Martas Cathedral Church that has a beautiful white exterior façade and is the oldest church in the country housing the remains of its founder. The interior is equally majestic with arched ceilings, majestic chandeliers and an elaborate altar set amidst domes and columns. All around the square are buildings from a Colonial era and a central open courtyard kind of space houses many statues as well. Close by is the Museo Del Oro Tairona Casa De la Aduana or the Customs House which is where the famed Gold Museum is located. The two storied house has a central open courtyard as well as a section dedicated to the pottery and gold jewellery. The square has small street stores as well from where you can pick up a quick souvenir – typically a hand crafted one. Another place to see here is Casa Quinta de San Pedro Alejandrino the place which was once a sugar mill and the place where Simon Bolivar, who fought for Santa Marta’s freedom lived towards the end of his life. The expansive space has a spread out landscape where iguana’s are spotted quite commonly as well as see the house that Simon lived in. Art lovers are in for a treat here as the Bolivarian Museum of Contemporary Art is on site that has a wide variety of art displayed from artists of the Bolivarian countries of Venezuela, Columbia, Ecuador, Peru, Panama and Bolivia.

Continuing my Colombian adventure, my next stop is at the colourful and vibrant city of Cartagena. Founded in 1533 Cartagena was an important trading port and being invaded several times in the past had been fortified. This is today the walled or old city called La Ciudad Amurallada and is the place where you must spend several hours as this is in a sense where the essence of the city is best captured. Exploring the labyrinth of alleys you will see delightfully colourful buildings, cobbled roads, a beautiful square and several museums interspersed with shops and cafes. The Santuaris de San Pedro Claver museum houses Saint Peter Claver remains and has rooms dedicated to fossils and religious art. The main square Plaza de San Pedro Claver has many sculptures on display giving you several Instagram worthy pictures too. Close by is the Museum of Modern Art that has many manifestations of visual arts. Another museum to see is the Museo del Oro-Cultura Zenu administered by the central bank that displays a large collection of Zenu jewellery. Stop by at the cathedral Basilica Santa Catalina de Alejandria whose Doric columns and semicircular arches make for a pretty sight. Cartagena also has a large fortress called the El Castillo San Felipe that was built in the 1600’s, to defend the Caribbean trade of the city. The imposing structure is a UNESCO World heritage site and the climb to the top will reward you with panoramic views of the city.

The highlight of the cruise is the famed Panama Canal, an 80 km long stretch between the Atlantic and Pacific Oceans. The canal uses a system of locks or compartments with entrance and exit gates and the locks function as water lifts; they raise ships from the sea level (the Pacific or the Atlantic) to the level of the Gatun Lake which is 26 meters above sea level and ships then sail the channel through the Continental Divide. A fellow traveler who decided to stay back on the ship actually mentioned she did not miss a shore excursion as the entire process was accompanied by a narration on the ship! The city of Panama incidentally happens to be one of the fastest developing economies complete with towering buildings including a shiny Trump Tower. However it is the charming the historic district and UNESCO World Heritage Site, Casco Viejo that is the place I recommend you not miss. Within the old quarter there is a mix of old almost dilapidated buildings and chic new coffee houses and hotels. The best way to explore the churches, palaces, plazas, restaurants, cafés and markets here is to walk through the many streets and alleys. The Herrera Plaza was originally for houses but after it was burnt in a fire in 1781, the interiors have since been restored as a banquet hall with floors made out of wood from trees that were submerged in the Panama Canal. A visit to the Iglesia San Jose or the Saint Joseph Church that has a beautiful gold altar is recommended. The exterior façade of the Compania de Jesus which is the ruins of a Jesuit temple and convent that was burnt in 1781 is a great place to take some pictures. To round up your trip a visit to Flamenco marina that has a combination of shops and restaurants overlooking a yacht bay is a must.

One of my last stops was at Costa Maya the home of the Mayan civilization. The Chacchoben Ruins Tour is a wonderful way to understand the Mayans and is a must do when you are here. The Mayans are known for their sharp acumen in the fields of mathematics and astronomy and it is believed they were among the first users of the symbol zero. You can see a lot of their work at Chacchoben that loosely translates to ‘the place of red corn’ in Mayan language. The ruins here approximately date back to 200 B.C. and the structures here are from 700 A.D. The dark brown massive structures are best seen with the help of a guide who will point out how the Mayans used them as temples, courtyards and pyramids. The site of the ruins is set amidst dense foliage and involves quite a lot of walking on uneven terrain. There is a cafeteria and a shopping arcade on site as well. Do observe the local Spanish moss plant here and keep an eye out for the spider monkeys and several birds that are sighted here. 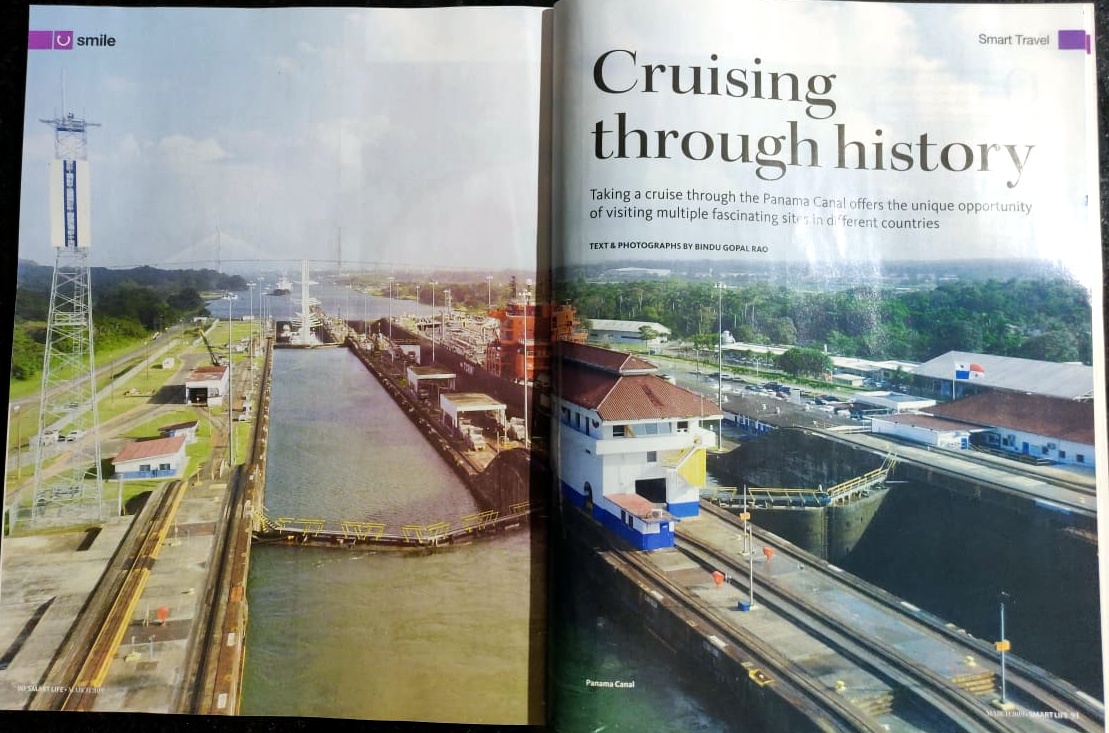 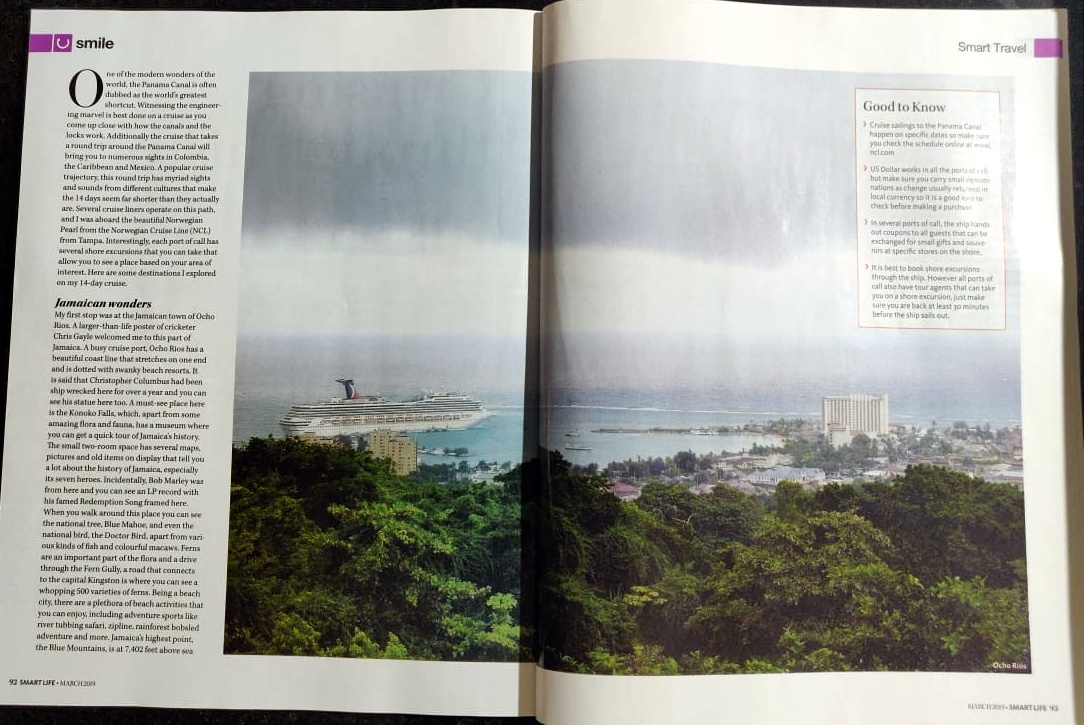 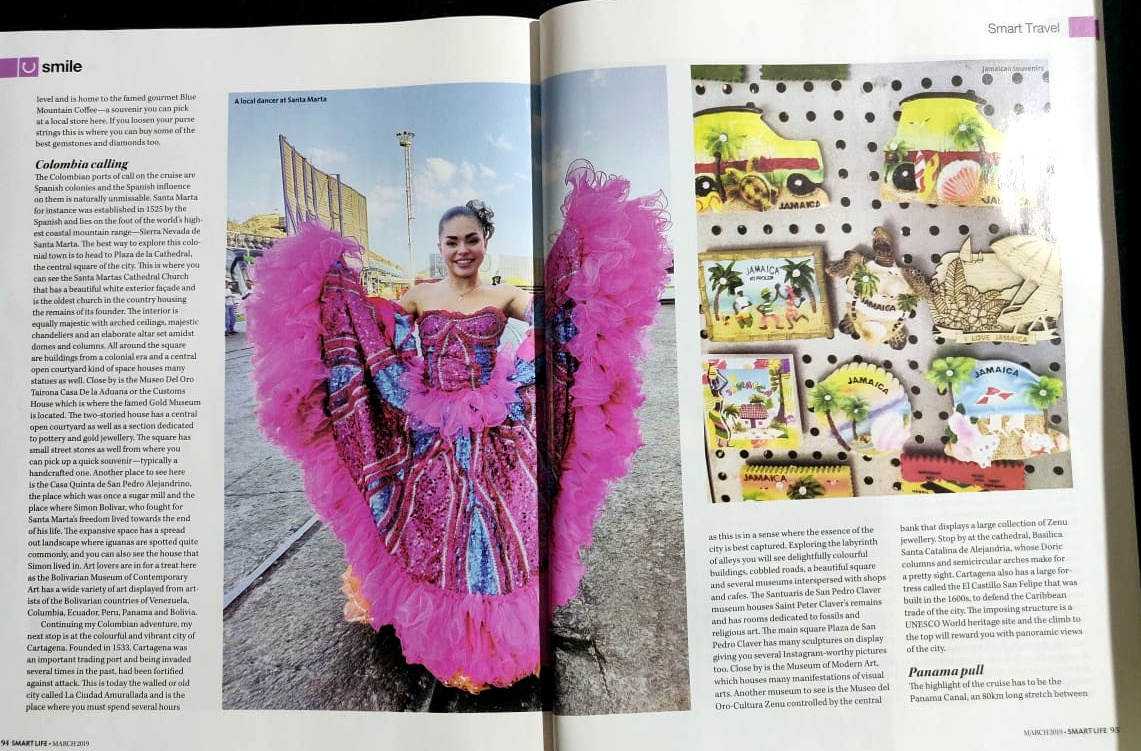 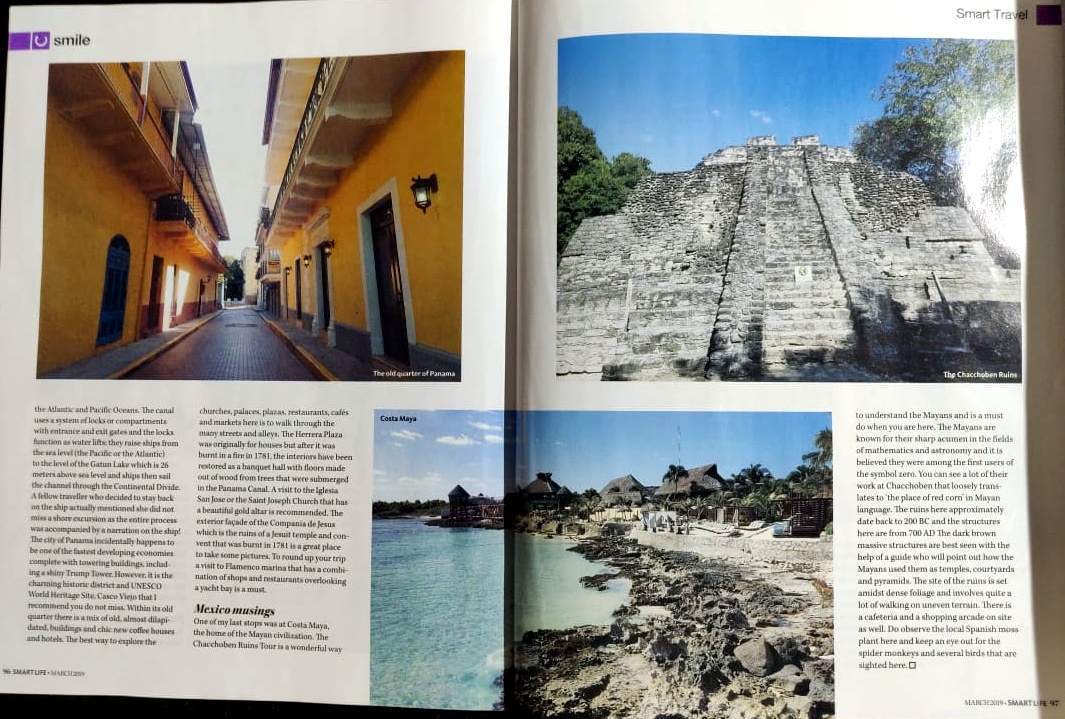 Read about other destinations and experiences on board as well for what other things you can do on this cruise.