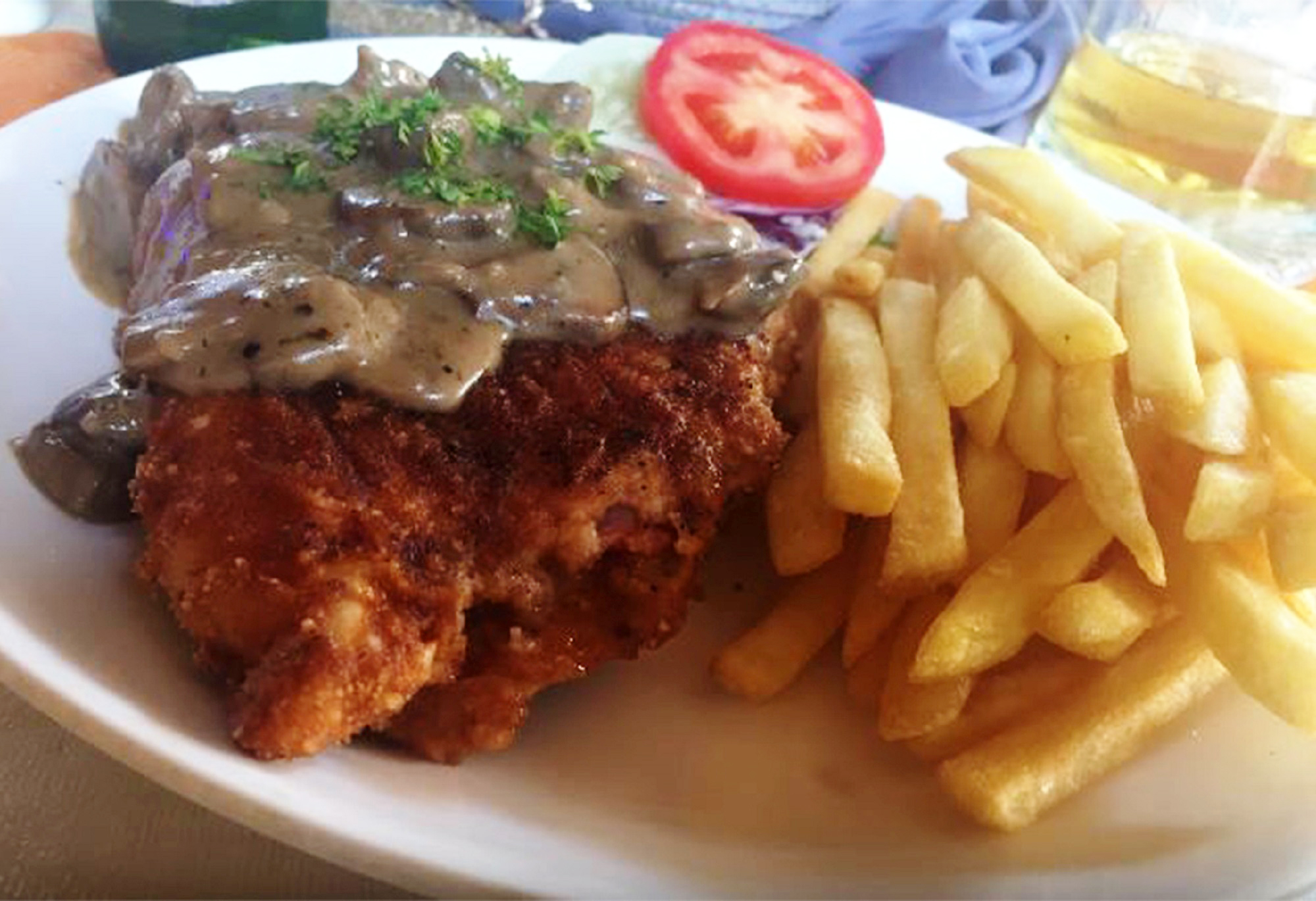 The cuisine of Pondicherry merges French and Indian sensibilities to create a unique one-of-its-kind Franco-Tamil food that has influences of Dutch, Vietnamese and Portuguese and Bengal that makes this a plate to relish.

One destination that I can visit anytime is Pondicherry. Over the years I have come to realise that it is the old world charm of the city with its stunning ocean views, swaying palm trees and French architecture that combines to makes this a destination like no other. The French influence in the city is unmissable which is no just evident in its stunning architecture but also in its food. The roots of course were laid from 1674 to 1962 where the city was part of French India. The town has a unique Franco-Tamil culture that makes its cuisine what it is with ancient recipes passed on from one generation to another.

As one would expect out of a coastal town, seafood plays a prominent role in their cuisine. The Indo French cuisine mystically combines a variety of spices without letting any single one overpower the whole preparation. The availability of fish, crabs, and prawns are one of the most popular dishes cooked in artistic styles. Overall as far as ingredients are concerned, more or less they remain the same as they consist of turmeric, eggs, coconut, kombu and rest local spices. Celebrity Chef Ananya Banerjee avers, “it is pretty evident in Pondicherry’s culture of how strong French involvement is and has become inseparable. Talking about Indo French cuisine, authentic French cuisine uses quite fewer spices as compared to Indian cuisine where Indians, in general, like to spice up their food. In fact, several French types of meat were embodied in Indian cuisine to make them spicier and more delicious that suits the Indian palate. The individuality of the French and Indo style gives birth to a novel taste which is marvelous. While French food demands everything to be cooked, served and savored individually like poultry, fish, vegetables, sauces), Indian cuisine featuring the mix-cook-serve composite dishes. This is where the uniqueness of cuisine stands out loud and clear.”

Le Dupleix by Hidesign, a heritage property located in the heart of the French town has been labeled the discovery of the ‘Creole’ cuisine – blend of Tamil and French that is unique in Pondicherry. “Being part of a coastal town, seafood plays a prominent role at Le Dupleix where we serve Pondicherry fusion cuisine. The menu has lot of seafood in the menu like Rasam aux Crevettes which is traditional south Indian spiced soup with coconut milk and shrimps, Fried Nethili which is mildly spiced Indian deep fried anchovy fish served with aioli. We also have Tawa Fried Fish wherein we use Red Snapper fillets served with mashed potatoes and mix lettuce. The cuisine also manages to excitingly combine a variety of vigorous spices without allowing a single one to overpower the preparation. Coconut is used in a number of dishes and as with French cuisine, accompaniments like onion soup, salad and bread are served with the meal,” says Chef Peram Mohan Babu Naidu, Executive Chef, The Promenade and Le Dupliex, Pondicherry. Another French dish with Pondicherry-style adaptation is Tawa Pepper Lamb where the mutton is cooked in a pressure cooker along with the spices, then fried with garlic and onions, roasted and finally finished with black pepper. “We also use free range chicken, where the chicken is deep fried and then sautéed with fresh Pondicherry spices and then tossed with tomatoes, onion and garlic which is called Poricha Kozhi served with French fries and mixed lettuce. Vegetarians can revel in curried vegetables and green peas stew with lemon cous cous in curry sauce. Since Le Dupleix’s ingredients are all organic, the flavours come out in all the delicacies,” adds Naidu.

Vegetarians can indulge in the smoked eggplant that is a local specialty. This dish is prepared by charring eggplant over coal before crushing and serving it. Stuffed cabbage, capsicum curry are other vegetarian delicacies to indulge in. Dishes like soya pancakes, bisques, and rice baguettes are their traditional favorites. Onion soup, salad, and bread are served as accompaniments with the meal. Nung is a delicate fruit that is quite common and is usually paired with prawns. The gravy prepared is crisp and pungent akin to lemongrass gravy. Pouillon Baisse is a dish that is a local adaptation of profound French bouillabaisse. This dish has its own peculiar taste with the incorporation of green chilies, bay leaf, cinnamon, ghee, carrots, beans, turmeric, potatoes, and coconut milk. “As far as I have noticed, the difference lies in the ingredients and in the preparation of the dish. The resulting taste may differ and can perhaps be a little more on the subtle and rarefied side. The rest of the recipes are French originated but have integrated Indian spices for a unique touch. To put in simple words, Pondicherry cuisine is a fine fusion of Indian food with a French twist,” says Banerjee.

When you are in Pondicherry an experience that you must not miss is to book for a meal with Pushpa De Canaga a home chef who hosts a table called Chez Pushpa (meaning Pushpa’s house in English). This meal can only be pre booked and you can also learn some cooking tips from Pushpa when you are a her home. “The French Indo cuisine has the Indian spices but to make it less spicy coconut milk is used. Some typical dishes include Fish Assad, creole salad, roasted chicken with beans and carrot and fries, roasted pigeon, pork vindali, pork vadavoum curry, meat balls curry, mutton thalicha, vegetables with minced beef, Indian leaves with prawns. For the meal, most of these dishes are cooked by me. I cook at my house and a very authentic Pondy meal is served on a banana leaf,” says Pushpa.

It was around the 1980’s that the culture of handmade farm cheeses began in Auroville. “The milk is supplied from farms in Auroville as well as by farmers from surrounding villages. At present there are professional cheese makers from Italy and Holland producing cheese in Auroville, Using natural ingredients only, and producing handmade cheeses in over ten varieties daily. All cheeses contain only natural whole cow milk, salts, vegetarian enzymes and seasoning cultures. No preservatives, artificial flavors or colors are used. Nor emulsifiers – used in industrially produced cheeses to retain moisture and fat-. This approach keeps the authentic texture and taste of traditional farm cheese and guarantees the natural balance of vitamins, proteins and fat which gives cheese its unique characteristics,” says Naidu. Pondicherry’s cheeses are really making its mark especially in the Indian market and there are several cheese makers as well as a handful of very popular cheese factories in Pondicherry. They are pioneers in recreating varieties of French and Italian cheese. “The popular Brie, Camembert, gruyere, cheddar and Italian gorgonzola Parmesan are all available and produced there. The most interesting part is they create Indian flavours to these cheeses. The most unique flavour I tasted was curry patta very hot and chilli flavoured cheese,” opines Banerjee. Different types of cheese that is produced in Auroville are parmesan cheese, gruyere, cheddar, auroblochon, gorgonzola, lofabu, swissly, feta, jeera, Philadelphia, farm, mozerella, ricotta, and goat cheese.

The desserts and bakery items at Pondicherry also need special mention. For instance the croissants at Bread & Chocolate (a new age café) are authentically French and hand-made by co-founder and head chef, Daniel Trulson. “In the true French style, we often make extra so day-old croissants can be converted to almond croissants. Bread & Chocolate is also the only official Mason & Co chocolate shop. We even make a Pain Au Chocolate using Mason & Co dark chocolate,” says Mansi Reddy – Director Partnerships & Marketing, Mason & Co. a homegrown chocolate brand from the region. So the next time you are in Pondicherry stop for some culinary treats – its sure to add a dash of spice to your holiday.