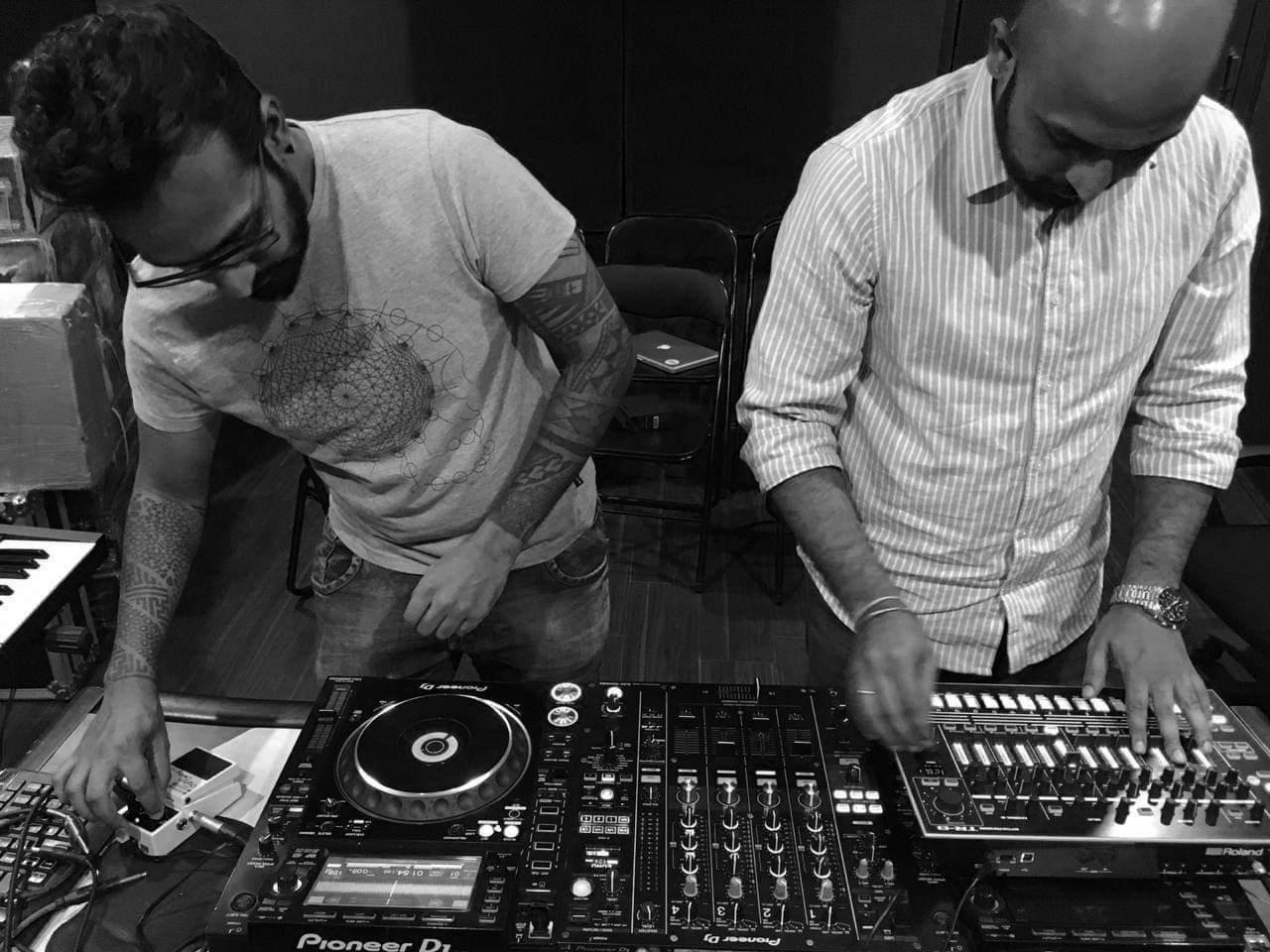 Synister along with Weird Sounding Dude will be taking over the decks at Puma Shuffle this Saturday at the exclusive pre-event party for India’s Premier electro music festival – Go Madras.

If you love music and like to experience something creative and experimental, head to Puma Shuffle a space for creative expressions to get a sneak peek into Go Madras one of India’s most popular electronic music festivals that is hosting an exclusive pre-launch gig in Bangalore this weekend. Go Madras is a multi-genre electronic music festival that takes place in Chennai and is one of India’s highly revered music festivals with its careful curation of artists featuring some of the best international as well national talent and well attended by people from all over the country. Their focus is on quality and not quantity, and thereby this makes a fantastic vibe at event thronged by serious music lovers. This edition features probably is the strongest program till date with a varied selection of highly reputable artists across all genres. “We are excited to collaborate with PUMA Shuffle, a new hub for growing sub-cultures in the country. Go Madras has been around for over a decade, with an aim to bring in audiences from across the country. An exclusive pre-launch helps to celebrate with our Bangalore audience. The night will feature a debut of a b2b set of two of the most upcoming techno and house artists from India alongside other top local talent,” says Shiv Gupta – Festival Director, Go Madras.

Synister is an acclaimed Indian psytrance artist, with majority of his tracks in the Beatport Minimal charts. His music is supported by the likes of Nadja Lind, Paco Osuna, Luigi Madonna, Paul Ritch, Stacey Pullen. Weird Sounding Dude is one of India’s longest standing and most intriguing progressive house artists. Being a regular on the charts of Beatport, his music has gained continuous support from the likes of Hernan Cattaneo, Cid Inc., Bog and many more. Synister and Weird Sounding Dude will be dishing out a special hybrid live set. They will be supported by Shaz and Chaz, and Delika. Weird Sounding Dude says, “I will be playing some of my recent releases that range between melodic techno and progressive house. I am very excited for this gig as it is the first time I am playing a b2b with Synister. He has a different style, but him adapting to fit this sound to perform is going to be really interesting. Our setup is quite awesome, and we already tested with a few rehearsals and the result is quite cool.” Synister avers, “my style of music is quite different from Abhi’s. While he is more on the house side, my sound is more techno. However this is what would make the set very eclectic and engaging. The hybrid live set is setup where we would add extra machines and gear on top of a standard DJ setup. This allows us to be more creative on the fly and this makes the set and performance really unique and I can say that it is going to be great.”

This weekend event in Bangalore is a promotional event for Go Madras where the organisers will be giving away exclusive festival material and running contests for tickets to the festival as well. “Some of the best producer talent in the country will be showcased. The hybrid Live set, 5 acts on stage on a night, giving you an idea of the vibe at the festival could be, just alone with the music and the ambience is quite attractive.  We want our Bangalore Audience to get a glimpse of festival hence we are coming to Bangalore this weekend.  The crew from Go Madras will also be there so the audience can also know more info about the event and get a first-hand idea about what the festival is all about, for those who are not aware of it,” says Gupta. 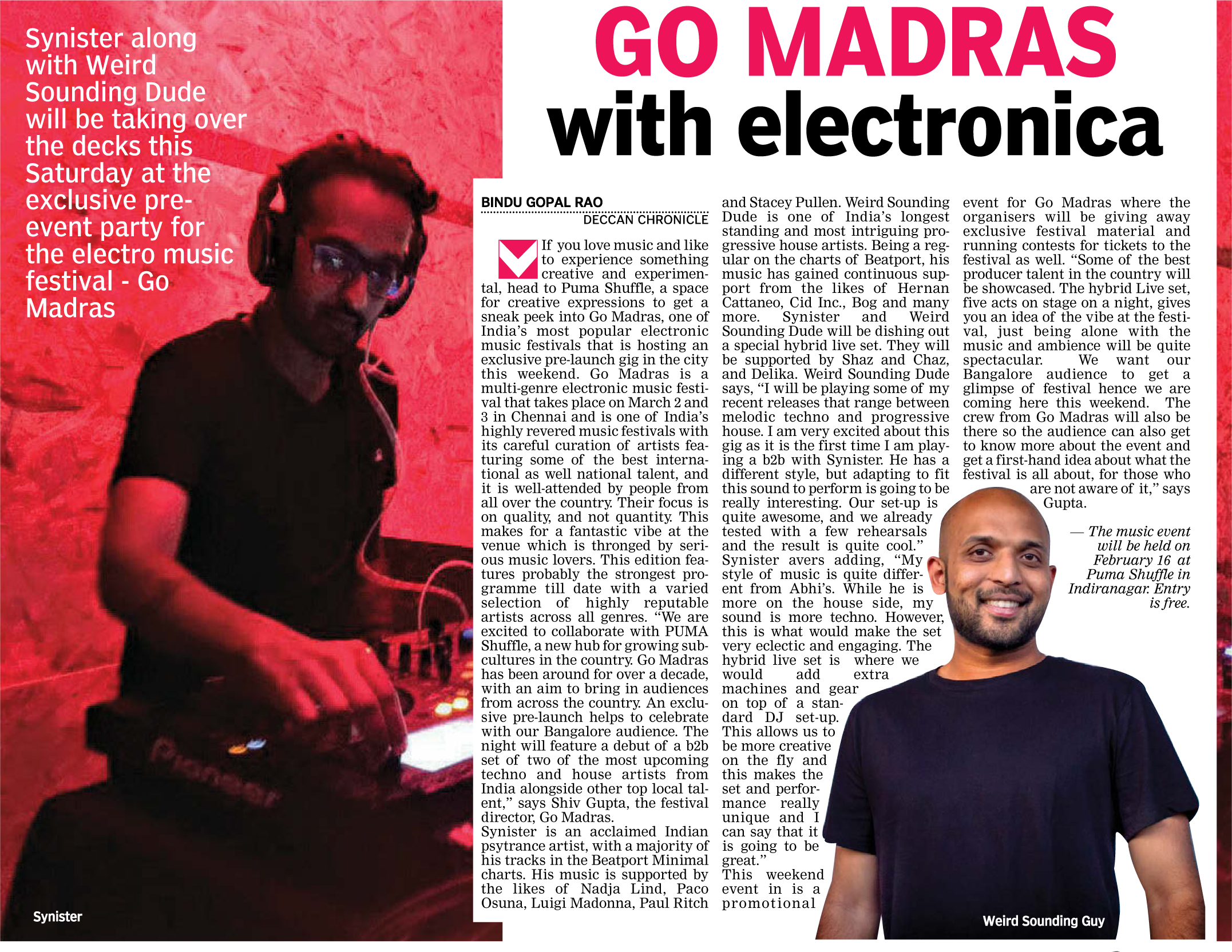