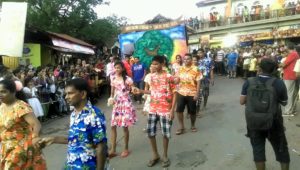 Think Goa and immediately visions of sun, sand and surf come into mind. However India’s smallest state is also the one that has several festivals. And the Bonderam Festival is one such festival.

This festival is celebrated on the quaint island of Divar 12 kilometers away from Panjim, on the fourth Saturday of August every year. The place can be reached by ferry from Old Goa as well as Ribandar. The name Bonderam revolves around the involvement of flags which in itself is an interesting story. Bomderam originates from the involvement of flags and Bandeira is the Portuguese word for the Flag. Frequent disputes which occurred between two wards (section of the village) – Piedalda and Sao Mathias – over property matters often led to bloody duels, and sometimes death. Subsequently, the Portuguese introduced a system of demarcation of boundaries with flags of various nations. The rival groups, however, knocked down the demarcation flags sometimes with stones. 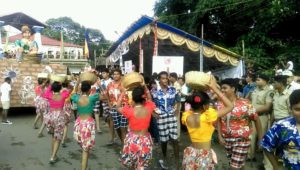 Today, in a parody of the past, this is commemorated with a “Fotash” flight (toy weapon of bamboo stem) and berries are used as missiles in a mock fight between rival groups to knock down an offending flag. On the day, a carnival ambiance is created. Each ward of the village has a float at the parade. Though sponsored by business houses, the floats have an unmistakable local flavour. Melodious music drifts from the village to mainland Old Goa – once the hub of Portuguese Goa – even before the crack of dawn on the Saturday. At noon people begin trickling into the village. By the evening the trickle is a deluge. An expectant crowd assembles along either side of the main through fare of the village. The tempo is set by lands and lasses wielding “fotashes” engaging themselves in mock battles. The gaily coloured floats accompanied by colourfully dressed youngsters make a pretty picture. The festival begins close to noon and concludes late in the evening.

If that got you interested read my story in Spice Route magazine, the inflight magazine of Spicejet Airlines here: Bonderam. 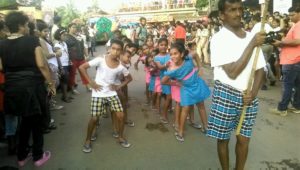