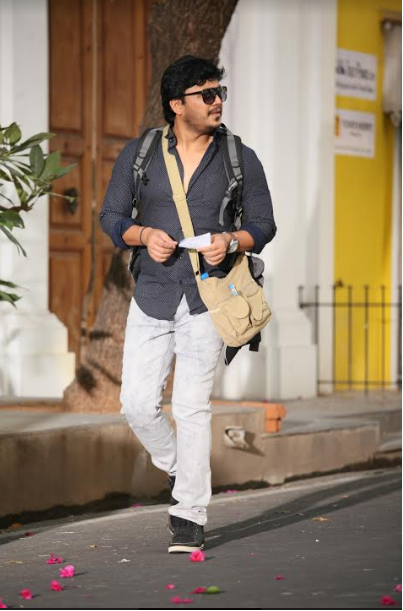 The Actor with the ‘Golden’ Touch – Ganesh

He has completed a successful decade in Sandalwood, crossed the 25 film mark and says “he has just started”. Rightfully given the title Golden Star, Ganesh is also easily the most affable and amicable star and actor who makes this conversation seem like a breeze. A self admitted bundle of energy who has the need to be doing something all the time, Ganesh is a delight to speak to as he tells us more in this exclusive tête-à-tête.

Ganesh started working in television initially and debuted in films with a lead role in the 2006 film Chellata. This year also saw him play the lead in Sandalwood’s all-time blockbuster film Mungaru Male that was screened continually for 865 days – a record in Kannada cinema! This movie set the stage for several others including Cheluvina Chithara, Gaalipata, Maleyali Jotheyali, Shravani Subramanya and Mungaru Male 2 among many others. So I start by asking Ganesh how he reflects back on this journey to date. “I feel I have to do more as I have not done anything much. Am looking forward to doing varied work and as I do three films each year, am hoping that one is different. It could be experimental but with commercial elements and I am in discussion with production houses to see how that will pan out.” Last year he had four releases in Style King, Zoom, Mungaru Male 2 and Sundaranga Jaana and says the year was fantastic. “Each year has been good and 2016 saw both box office and critical acclaim so it does feel very good and I am happy. But let me tell you a secret I don’t really watch my movies, except at the dubbing or re-recording stage as I find a lot of flaws in my performance and feel that I could have done it better. In fact I feel that I can improvise with every film and that is what keeps me going.” 2016 also saw him be part of a sequel to the hit Mungaru Male and he says while it is a fantastic franchisee it is important to keep the brand value intact and there is pressure to perform well to live up to the expectations.”

Currently he has just completed shooting of Mugulu Nage that has seen him teaming with Yogaraj Bhat once again after Mungaru Male and Gaalipata and says that the movie that has turned out very well. “We have done our best and I guess it will satisfy the audience. With Yogaraj Bhat and me, just like the audience has a lot of expectations, we also have the same level of expectation from each other and we discuss each scene and dialogue. It’s turned out as a fresh film that will be magical on screen – whether it is emotion, romance or action.” The movie will release post the release of Pataki in May. Also he says Pataki will be different too as he plays a cop for the first time. “I am playing an ACP for the first time and this is a complete entertainer and it was a great learning to play a cop on screen. Also the character is shown as an entertaining corrupt cop who changes post the interval so we can take the audience on a journey through the story.” With a large body of work and aspirations to do things differently, has he changed the way he selects scripts? “Yes, the idea is for both the audience and me to have a new experience and Pataki is an example of that. So when I listen to a script, I try and make a judgement based on what is the new thing I can do. Of the 12-15 scripts I hear, it is about selecting 3-4 mixing up genres so that the audience is entertained.”

Ganesh also says that today the audience has matured to become receptive to varied cinema and has evolved to becoming accepting of unusual scripts and stories. “Now we can see makers doing so much different work say for example Pawan Kumar’s U-Turn or Lucia. Also now the number of multiplexes has increased over the decade and ticket values have gone up but audiences want to watch movies in luxury. All this helps us to have better budgets and locations apart from investing in designers to craft the look of the entire cast that adds value to the film.” This means that the film starts earning more and soon which helps the industry as such. Likewise he is also happy to be back on television with the third season of the hit show Super Minute. “This is a hit franchisee which will take us into many homes. What I like is that it has a social angle and we are able to help someone in need, maybe educate a person or help an ailing person with medical care and that is immensely satisfying. I am very emotionally attached to the show as it helps me connect with real people and understand what they need and that is something that money can never buy.” Ganesh has also become active on social media over the last 6-7 months and says it feels great when you connect to audiences directly. “As soon as I uploaded the trailer of Pataki, it got a whopping 2 million views and when the film releases even if half of them come to theatres, it is great. Also fans are updated directly with real news.” But what about the flip side of social media I ask him and he is clear that he will not respond to unnecessary comments and prefers to let his work do the talking. He also admits he is in talks with Pawan Kumar for his next film based on nicotine. “Yes, I have read the script twice and we are talking on how to take it forward. Also Pawan is a great guy and we know each other from long. In fact he has acted in my movie Circus also.” He is all set to start shooting for Chamak directed by Suni and then move on to Orange to be directed by Prashanth Raj. Keeping busy is second nature to Ganesh and he says he enjoys spending time with his kids when at home, chilling out playing games and watching movies. Here is wishing the star with a golden heart more success!