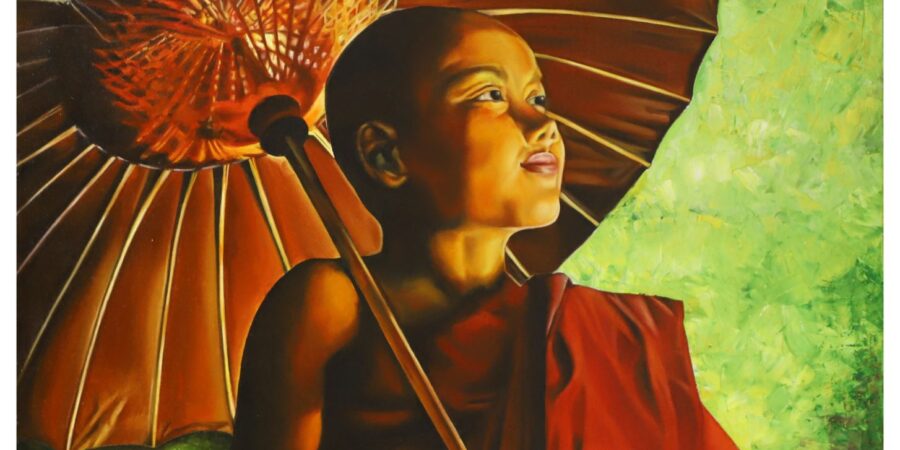 Inspired by her visit to monasteries in Ladakh, ghats of Ganga at Varanasi, Kedarnath and temples of south India, Kanheri caves at Mumbai and other enchanting expeditions, the painter in Shruti Goenka urged her to create a series of artworks having elements of spirituality, which evoke thoughts in viewers mind about the creator of this life, flicker the mysteries of the universe and resonate with their inner space.

“The meaning of spirituality can be different to every human being. For some it can be an experience that creates a system of personal beliefs in a religion or God, for some it can be just connecting with something bigger than yourself, for others it can be in the form of service to humanity or connecting with nature, art, yoga, meditation etc” shares the artist Shruti Goenka.

The exhibition which is set to begin from 24th November has artworks by her visit to Ladakh, ghats of Ganga at Varanasi, Kedarnath and temples of south India and Kanheri caves at Mumbai. The five elements of creation, karma, faith, mindfulness, meditation, yoga, wisdom and the path of self-realisation takes various depictions in the artworks of Shruti. She has shown Buddha in his Vajradhara position, several forms of mindfulness and compassion are shown through White Tara, Bodhisattva Warrior is depiction of a heroic being with a brave mind and an ethical impulse, a meditative figurine artwork by the name Nishtha represents that meditation is not an activity, it is a quality. Longing for truth &amp; knowledge has been depicted through Tamso Ma Jyotirgamaya (from darkness to light/knowledge).

“The gratitude towards the five life creating elements is presented by Panchtattva Aaradhana and a scene from evening aarti performed every day at the ghats of Kashi has been showcased in the artwork by the name Ganga aarti. The message of remaining in the state of eternal bliss and that the source of creation is within us has been shown in “Aham Brahmasmi” which depicts a monk in deep meditation” added the artist.

“Shruti Goenka is a very talented artist who works on various mediums such as oil, acrylic, watercolor and charcoal. Few of Shruti’s paintings focus on traditional forms of art, which depict recreating the spiritual and meditative strengths of Buddha; the enlightened one. These series of work are rendered in stark, clear linear quality and a flamboyant colour palette” shares the Curator of the show- Sangeeta K. Murthy.

The artist believes, in all the phases of life karma is the only constant and she has presented this fact with a series of four artworks, titled Karmanaye Vadhikarast to bring karma into the picture, she has used human hands, as a tool and showcased that our karma is in our hands.

Artworks are inspired by Shruti’s signature style, wherein she has used various hand mudras, lotus and lotus leaves, koi fishes, water waves, ever expanding circles, made in vibrant colour schemes reflects how an exceptional striving leads to the beautiful outcome taking examples from nature, and she reflects how meditation does the same for the human system.

Read the full story that first appeared in The Chakkar here: