“Music is the strongest form of magic” said Marilyn Manson and you can experience this first hand at Fakiri – Season 2. With a motley mix of artists belting out original numbers this will take you on a new age musical journey. From Chandana Bala Kalyan classical fusion music to Neeraj Arya’s Kabir Rock to Harshdeep Kaur’s hit Bollywood numbers you have it all. The event is being organized and conceptualized by Saikat Pande and Kaustabh Roy of Vaani Production. The show will also see renowned Folk, Sufi and playback singer Mame Khan from Rajasthan’s Manganiyar community in action. The composer and arranger whose voice has lit up music events around the globe will be performing his super hit Chaudhary from Coke Studio with Amit Trivedi as well. With music in his blood (being from a family of musicians, Mame admits that music is his life and soul. “It is in my blood and I am very proud and happy and thank God that I have been born in a family that is surrounded by music.” Carrying forward the legacy he has inherited, he adds, “this comes with a sense of responsibility but the pressure was more to be a good singer and create good music. Also in spite of the fact that I have sung a number of Bollywood songs, the young crowd always asks me to perform on my traditional numbers.” His gharana of music Jangra is performed in a semi classical style and involves a slightly more difficult style if singing. Apart from singing his hot song Kesariya Balam that he has rearranged, he will also croon to Saavan, Loli and Nimbuda. “We will also be live streaming my newest song Laal Peeli Ankhiyan which is a traditional romantic Rajasthani song with a world music appeal as it has a Spanish flamingo twist with melody from the saxophone.” Looking ahead Mame has a number of collaborations and Bollywood numbers in the pipeline. “I will continue focusing on folk music rearranging tracks that have not been heard and Bollywood songs as well.” 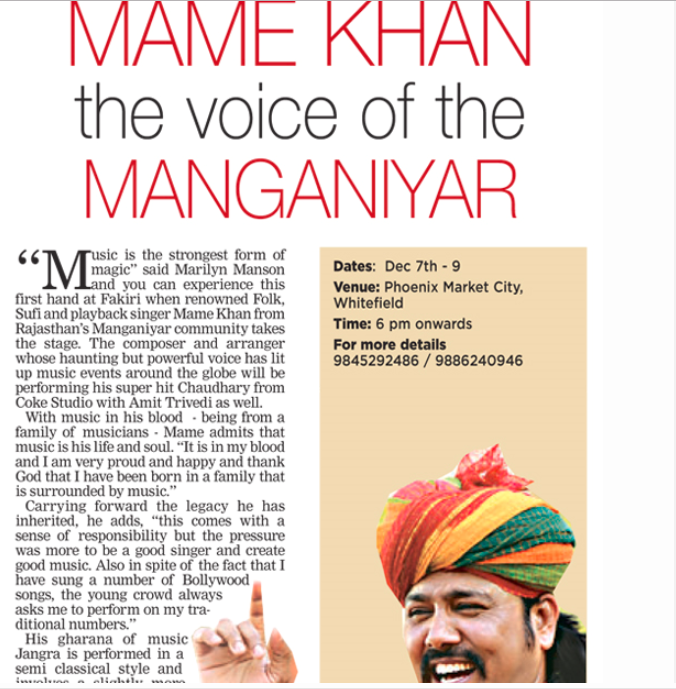