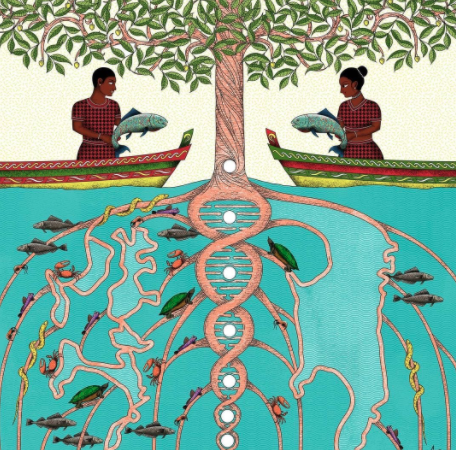 Biodiversity by the Bay’s campaign #MakeArtforMumbaisMangroves
launches a virtual gallery on World Environment Day to showcase the diverse artworks that the movement has received from young creatives in support of Mumbai’s unique green ecosystems.

The campaign to create conversation around Mumbai’s rich biodiversity began on 22 April (Earth Day). Over the course of the next one and a half months, it reached over 4 million viewers, engaged over 240,000 audiences, and received over 80+ submissions. A zine featuring select 50 artists is also in the works with the aim to be presented to Mumbai’s Environment Ministry and drive citizen action in favour of the city’s wetlands.

With the inevitable rise in sea levels, and the recent Cyclone Tauktae that
flagged the west coast of the country, it is only more evident that mangroves form natural barriers against such extreme weather events. As climate scientist Dr. Roxy Mathew Koll recently said, “Mangroves act as the sponge of the city, breaking the flow of flash floods and absorbing the impact. Mumbai lost a lot of its mangrove cover and freshwater drainages, and we need to recover them.”