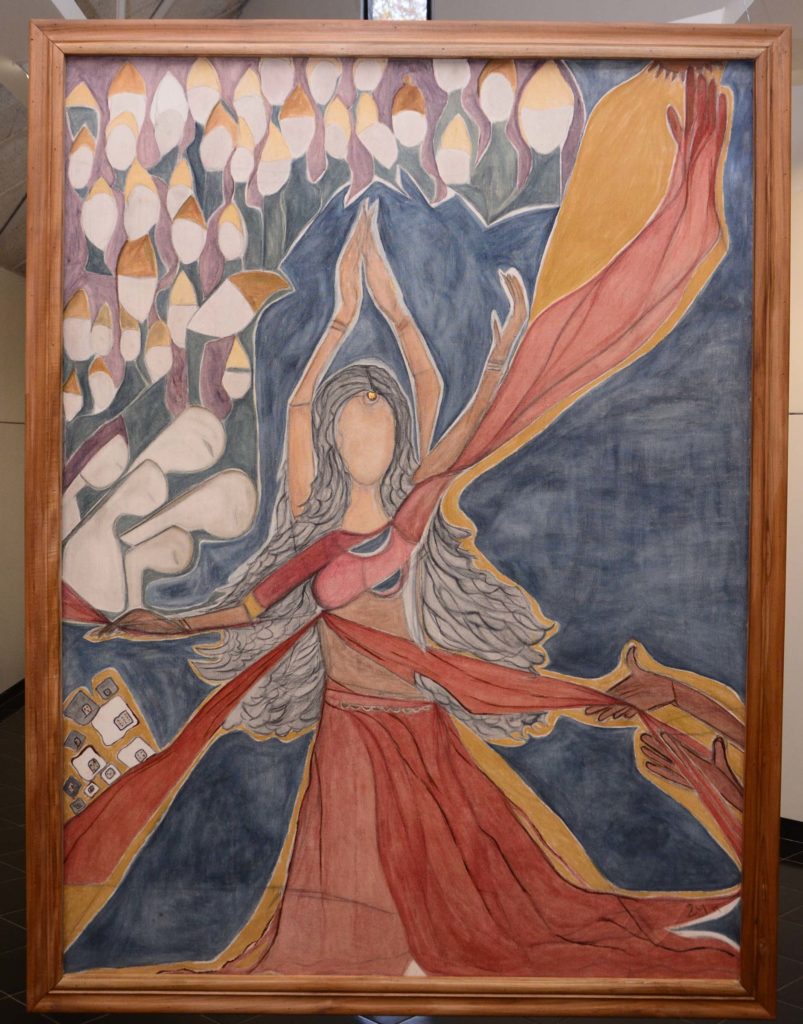 Did you know that UNESCO has announced ‘Natural Dyes’ as one of the intangible heritage properties in the cultural ecosystem? Well neither did I to be honest till I spoke to Ruby Jagrut. She is one of rare few natural dye artists with close to two decades of experience in painting with only natural dyes on canvas.

Hailing from a traditional Gujarati family that gave a lot of importance to disciplined lifestyle, Ruby loved painting as a child. However the calling of a career saw her do a course in Mass Communications course. “However, while the course got me an interesting job opportunity at Kanoria Centre for Arts, the work space provided me the-much-needed impetus to my dream of painting and trying different mediums. While I was working at Kanoria Centre for Arts back in 1994, I kept meeting artists and had the opportunity to understand their work. During one such chance interaction, I came across a fascinating workshop being conducted on natural dyes by the very famous and eminent artist Toofan Rafai. This workshop attracted me towards the world of natural dyes. Under the tutelage of Late Toofan Rafai, I started practicing the art of creating natural colours first and then creating my own imaginative art work. The love affair with these natural dyes has been long and strong. I kept experimenting with natural dyes and kept at it to create new shades of colours every time. I had my first solo exhibition in 1999. Since then, it’s been only natural dyes and canvas for me,” reminisces Ruby. 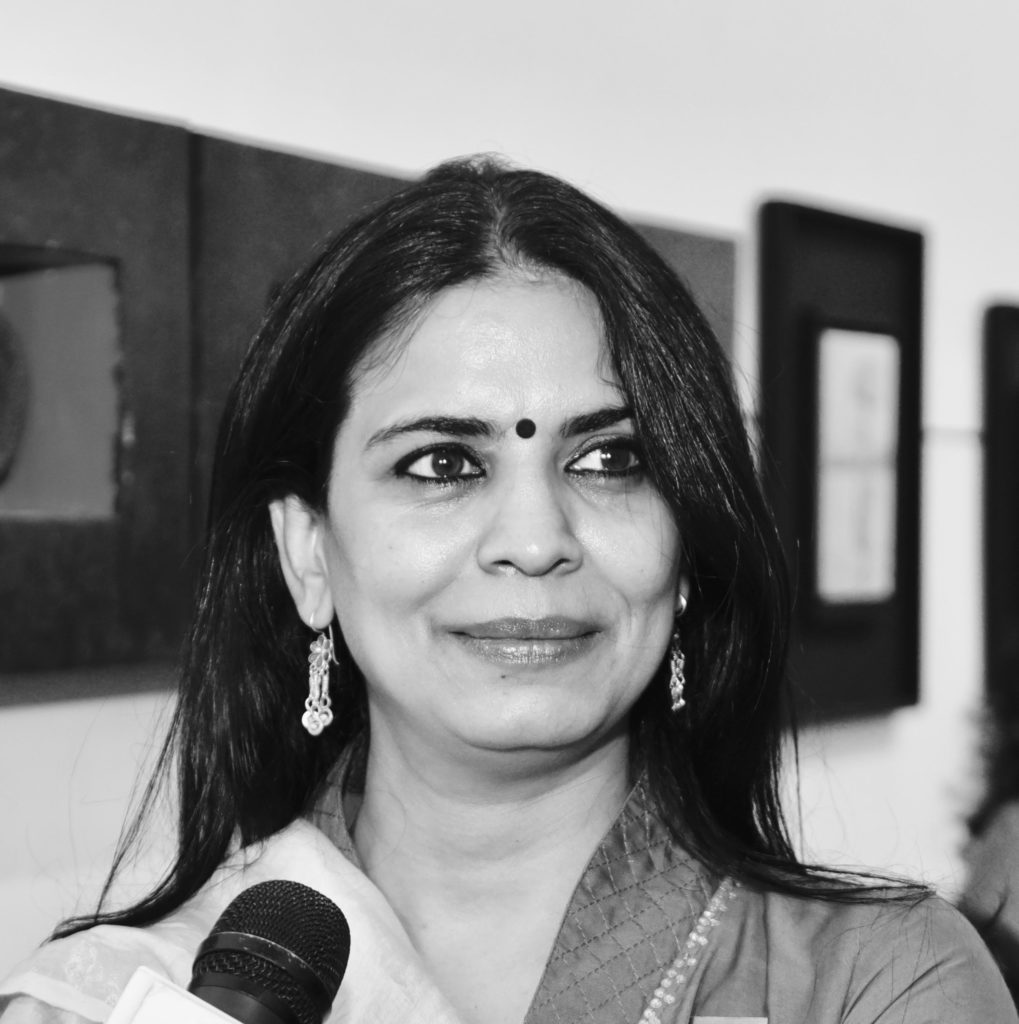 In a bid to raise awareness and popularise the concept of using natural dyes on canvas Ruby conducts short duration workshops for artists, dyers, weavers, students and private design centres.  She has been associated with various design schools like NIFT, Pearl Academy and C.N Fine Arts College for more than half a decade now. “I have travelled far and wide in the country spreading the love for natural dyes. One of the art centres from South Korea had invited me in the past to conduct workshops in various cities to increase awareness about natural dyes, which by the bye has been declared as intangible heritage asset by UNESCO. Meanwhile I keep getting international students and artists who want to learn natural dyes. Recently I had conducted a workshop for a group of Canadian artists who had come to Ahmedabad to learn natural dyes,” she explains.

Curious to find out if these natural colours are available easily, I ask Ruby if she sees this as a challenge and her answer surprises me. “We see colours everywhere but we do not question its origin or maybe never explore the possibilities of creating something new. I find colours everywhere; a palette of vegetable dyes can be made from flower, leaf, bark, roots, something as easily available in your kitchen as pomegranate seed and onion peel. One can look at spinach, Harda, Behada, Kesu flower, Coffee, Tea and Majith to name few ingredients. It is not just the ingredient but rather the process in which colour is developed that is of significance. There is definitive technique to mix it, blend it and develop unique shades. One needs to understand exact steps to develop colours; a step too less or a step little more and you might get a different colour shade.” Of course natural dyes are a little demanding as they require basic understanding of development processes. You also need to understand the property of the ingredients especially if it is alkaline or acidic. 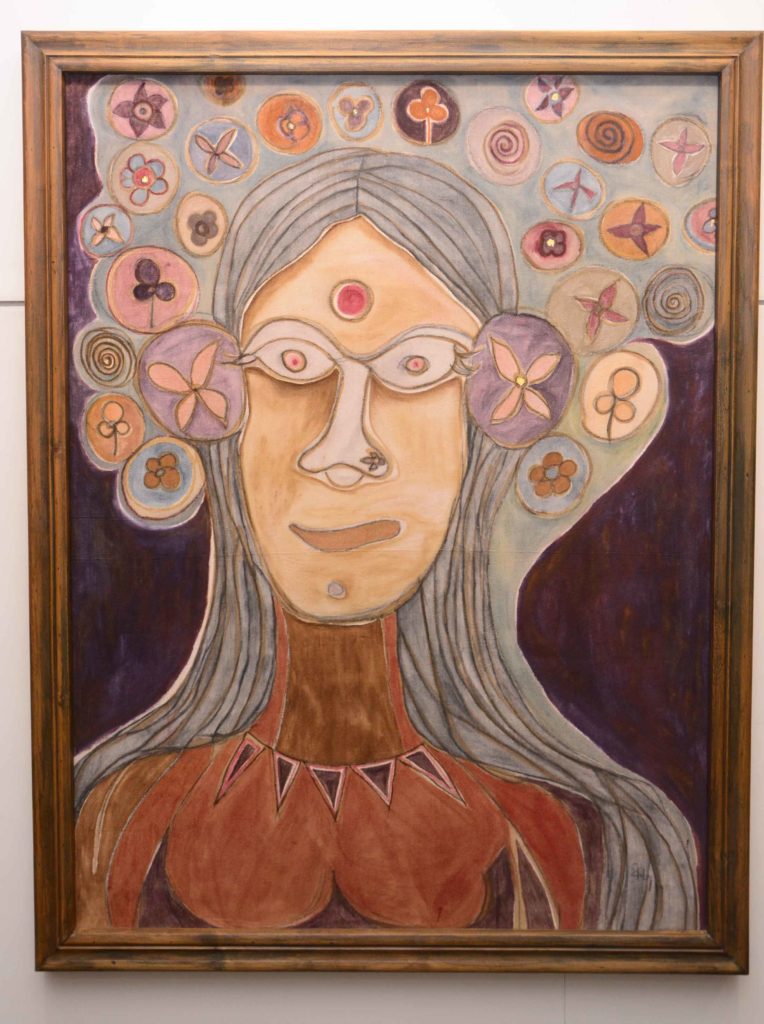 Ruby has also painted the women characters of Mahabharata in a set when she turned towards spirituality when she was going through tough times in her life. “My father’s sickness pushed me to seek comfort in the Bhagvat Geetha. While everyone talks about the relevance, one only relates when it’s personal. I was mesmerized by its relevance in contemporary times. The stories were meaningful and it started making me view women characters around me with a different perspective and correlate them with the mythological characters. It took me three and a half years to read 26 volumes of the epic. One after other 13 stories were formed and I painted these characters in a series called ‘Pratidhwani’,” says Ruby. She also started Abir her charity foundation trust which is founded to provide support to emerging artists. Abir has been working towards spotting sincere talent, mentoring them and help then showcase their work by creating platforms on both virtual and real expositions. It aims to create the conversation of art between society and artist by bridging the gap; a platform to provide access and mentorship to upcoming artists and promote exchange programme between artists of different geographies and ideas. “Being an artist has helped me understand the problems of young artists. It is difficult to have visibility in the art world for many. I saw that famous art galleries would only promote a set of artist and not all. While that can definitely be a good business model for a lot, it had a major con of not providing a fair chance to all artists. Hence I wanted to create a platform where artists are given a fair and equal chance to showcase their talent. This thought led to the formation of ‘Abir’ in 2016,” says Ruby.

For Ruby life is the biggest inspiration ever and she says that the ebbs and the tides of life provide her with thoughtful fodder for her creation. “My relationships with people and external surrounding have quite a strong influence on my works. It goes without saying that all different forms of art work serve as some form of inspiration,” she explains. She is currently working on a new series which hopefully should be ready by mid 2018. With ABIR is growing organically since last year and a half, she says that it is heartening to receive support from across the country. “Going forward, we will be including mentorship programme along with exhibition and competition of First Take. We will also be more open to experimental art forms and support different art forms and medium of expression equally,” she concludes.