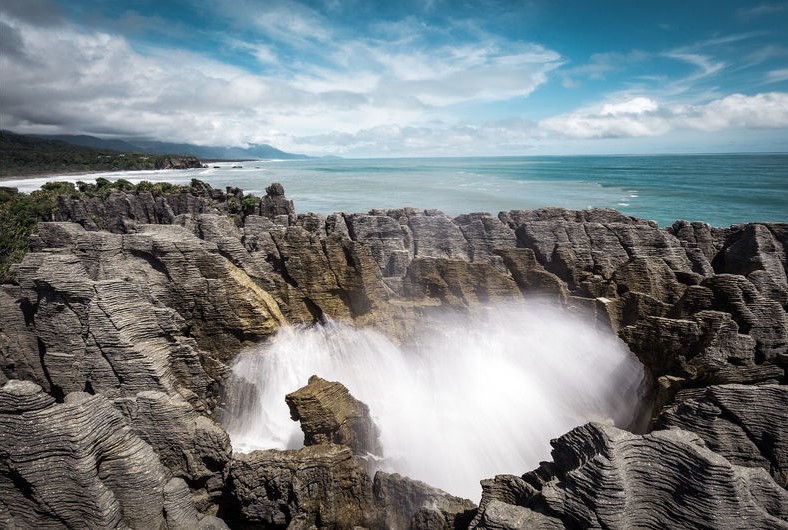 A country that has a potpourri of unique experiences, delectable cuisine and myriad sights, New Zealand offers a holiday that is hard to beat.

With 29 regions spread over 1600 km over two of its main islands, New Zealand is a geological wonderland with adventure activities, islands, food, culture and art that is waiting to be discovered.

If you love adventure, New Zealand has so many options that you will certainly be spoilt for choice. Head to Rotorua to try Zorb and Ogo. Orb is a large plastic ball which you can get into and roll down a hill. Ogo is a sphere which is cushioned and is suspended in a large outer sphere that makes the roll a little more comfortable! You can also go for heli skiing where you fly to the mountains and ski down or go off on an off road drive through back country roads or the sand dunes in Northland. In the mountains in Canterbury, Wanaka, Auckland, Coromandel and Nelson you can go canyoning and leap from waterfalls, climb, jump, slide down rocks and more. Try the zip line with stunning harbour views of the Waiheke Island. You can also go skydiving and soak in the sights of the country. Some of the best places to sky dive are in Wanaka, Auckland, Bay of Plenty, Queenstown and Lake Taupo. For more adventure Queenstown has the Kawarau Bungy site and New Zealand’s highest on atop the Nevis that guarantee you an adrenalin rush like no other. You can try rafting (grade 1 to grade 5) in the Tongariro River in Lake Taupom Queenstown or the wild West Coast or go caving in Waitomo Caves and also experience ‘sink hole’ activities.

Something that makes New Zealand unique is the unusual rock formations that can be seen across the country. The Dinosaur Eggs at Kaikōura that came into light post the earthquake that happened here in 2016 can be seen in Gooch’s Beach. These are huge boulders of minerals and are made from sedimentary rock. The beaches here are also a good place to see seals, dolphins, whales and shorebirds.  If you head to the Abel Tasman National Park you can see the Split Apple Rock that was created through a process called ice wedging and resembles an apple that has been sliced in half. Another interesting rock formation that was formed 30 million years ago is Punakaiki’s layered Pancake Rocks where the limestone structures have been formed with sustained seismic activity are a sight to behold. Take a walk here while you tuck into some delicious pancakes for a unique getaway experience. A 2.5 km walk will get you up close to another natural rock formation at Cathedral Cove in Coromandel Peninsula. The triangle-shaped cave here is worth many Instagram worthy pictures and you can try a spot of snorkeling when you are here too. Likewise a private farm in North Otago is home to Elephant Rocks which are massive limestone rocks some of which are a whopping 10m wide.

New Zealand is the place where star gazers will not be disappointed with nebulae, star clusters and galaxies that light up the night skies. The only island and one of the three in the world to have the Dark Sky Sanctuary status by the International Dark-Sky Association is at the Great Barrier Island in Hauraki Gulf. Some other places star gazers must not miss are at Tongariro Night Crossing, Central North Island, Aoraki Mackenzie International Dark Sky Reserve, Canterbury and Rakiura (Stewart Island).

With a coastline that extends over 14000 km the seafood in New Zealand is a must try. Do try the Maori Hangi which is a traditional slow cooked dish that has meat and vegetables and is reserved for special occasions. The crayfish or lobster, roast lamb, Paua, a large sea snail and kina, a type of sea urchin are some of the other local specialties that you must try. The Kiwi burger has fried egg and beetroot in addition to the regular patty is a snack not to miss. As far as desserts are concerned the caramelized honeycomb ice cream, jaffa a small orange flavoured sugar coated chocolate ball and Pavlova a dessert made with whipped cream, fruit and meringue. With a cornucopia of experiences, New Zealand is the holiday you must take. What are you waiting for? 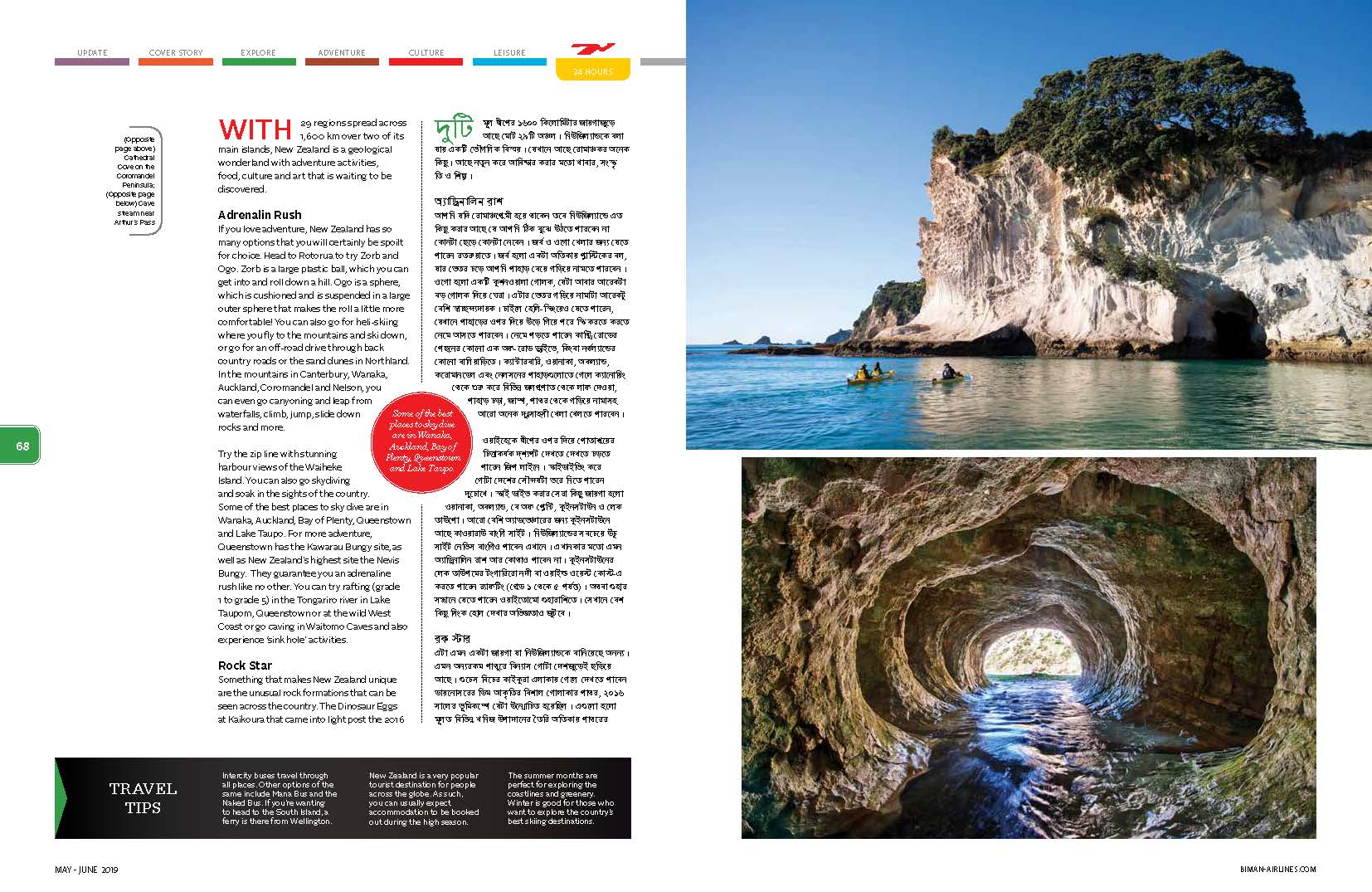 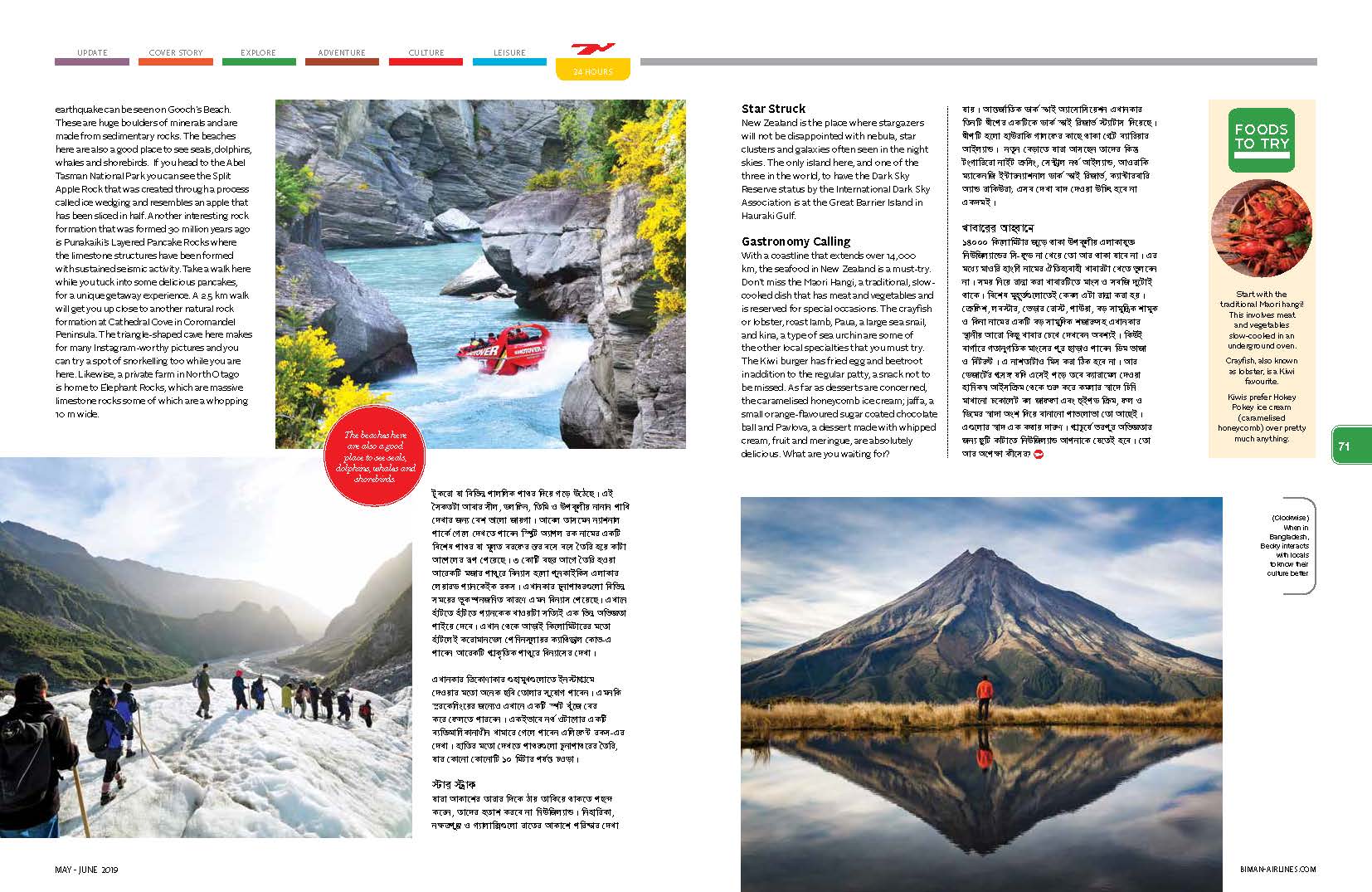