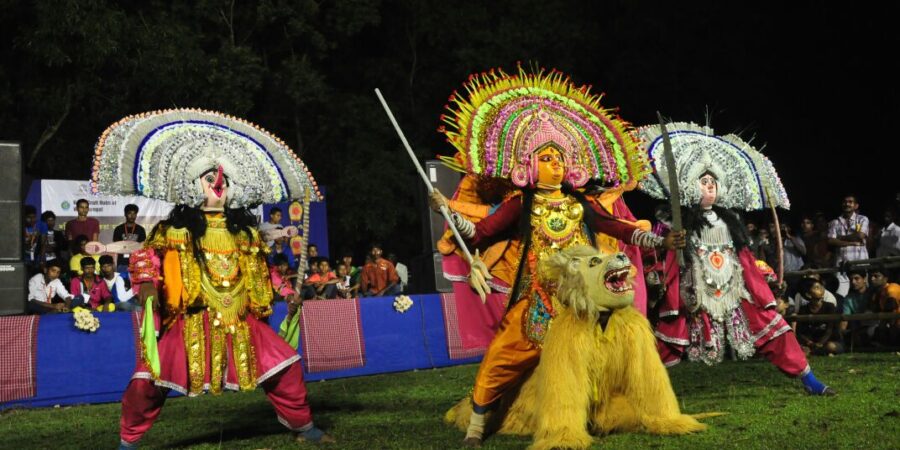 A dance form that has been inscribed on UNESCO’s Representative List of the Intangible Cultural Heritage of Humanity, Chhau is getting a fillip due to several concerted efforts.

A dance form with roots in Eastern India in which artists enact scenes from the Ramayana, Mahabharata, and local folklore, Chhau is practiced in Seraikela (Jharkhand), Purulia (West Bengal) and Mayurbhanj (Orissa) and is connected to the spring festival Chaitra Parva.

While the Chhau mask of Purulia has a Geographical Indication tag, the dance form in Orrisa does not use masks. A vast repertoire of masks of gods, heroes from folklore and mythology, birds and animals are used in the Chhau dance in Purulia. In 2017, the Indian postal department also released a stamp on the Chhau dance.

Traditionally Chhau was practiced only by men, but with time, several women are also in the field primarily to preserve the dance form and retain its history and roots.

Much before many of India’s dance forms got global recognition, the unique martial Chhau dance of Mayurbhanj had caught the attention of both the then British monarch and international media. In 1912, when George V and Queen Mary visited India, HH Maharaja Sriram Chandra Bhanja Deo, the king of Mayurbhanj (now the largest district in Odisha), choreographed and presented ‘War Dance’ with 64 Chhau artistes from the palace troupe at the royal couple’s reception in Calcutta.

Seraikela Chhau is a masked dance from the state of Jharkhand practiced in the Singhbhum region part of Seraikela. The focal point of this form are the clay masks that are created for it. It is truly an amalgamation of art and culture. In line with the Kiran Nadar Museum of Art’s (KNMA) expanding focus on culture, the space had exhibitions ‘K Ramanujam: Into The Moonlight Parade’ and Atul Dodiya: Walking With The Waves’ with Saraikela Chhau dance led by Padma Shri Guru Shashadhar Acharya with disciples Gunjan Josh and Shubham Acharya.

Read the full story that first appeared in 30 Stades here: