Tamil Nadu is known for rich cultural and traditional history and one of the best ways to see this for yourself is to explore its beautiful temples. With natural vistas that are stunningly beautiful, temples that date back several centuries and historical monuments, these places have a charm like no other.

A temple town located in Cuddalore district, Chidambaram has a history linked with the Cholas, Pandyas, the Vijayanagar Empire, Marathas and the British. At the heart of the town is the large Thillai Nataraja Temple spread across 40 acres. Dedicated to Lord Shiva in the form of a Nataraja, there are several other temples in the spread out precincts dedicated to Ganesha, Muruga, Vishnu and more. Chidambaram is one among the five holiest Shiva temples, each representing one of the five natural elements and Chidambaram represents akasha or aether. The shrine of the 63 nayanars of Lord Shiva is also seen here. The main sanctum sanctorum has a beautiful bejewelled image of Lord Shiva in his cosmic dance form of Nataraja. The image is in contrast to the linga form of Shiva that is commonly seen. The massive temple spires are done up intricately and walking around you can also see the numerous temple tanks. The temple is administered by Shiavite brahmins called Dikshitar who also work as priests here and are here through a hereditary chain. It is easy to recognize them as they have a typical hairstyle with long hair tonsured around the rim that is pulled to the left and tied into a bun. Interestingly this is said to mirror their awareness of cosmology and parts of the temple philosophy. Since both male and female energies are inseparable and essential for the process of cosmos, they acknowledge their female side by wearing their hair in this manner on the left side of the body said to be the female side.

Gangaikonda Cholapuram was the capital of the Cholas at one point of time and was a seat of power for close to 250 years. Founded by Rajendra Chola to commemorate his victory over the Pala Dynasty this town is today well known for a temple of Lord Shiva. The temple is said to have the biggest lingam in South India with a height of 4 meters! The architecture of this temple is quite spectacular and you get a sneak peek of what to expect when you see the figurine of Goddess Saraswathi at the majestic entrance of the temple. The shadow of the main tower never falls on the ground throughout the year making this an architectural marvel. Modelled on the Brihadeeswarar Temple at Thanjavur, the temple tower is a whopping 190 feet. The temple is nestled in a complex surrounded by lush green gardens and landscaping where you can spot some native birds. I was lucky to spot a small yellow gecko that managed to get the attention of many tourists too. A huge stone statue of Nandi at the entrance is another attraction. A small flight of stairs will take you to the main temple whose walls have intricate stone carvings depicting images of several Gods and Goddesses. An interesting element here is the large number of bronze images in these premises. 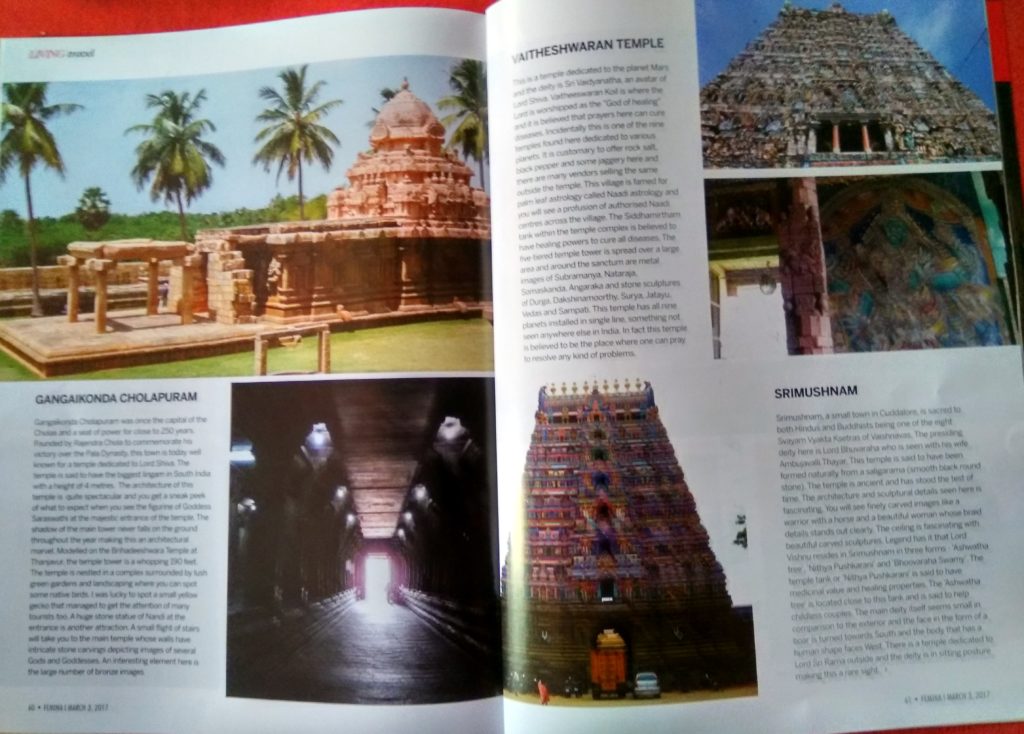 This is a temple dedicated the planet Mars and the deity is Sri Vaidyanatha, a form of Lord Shiva. Vaitheeswaran Koil is where the Lord is worshipped as the “God of healing” and it is believed that prayers here can cure diseases. Incidentally this is one of the nine temples dedicated to various planets that are spread around this area. It is customary to offer rock salt, black pepper and some jiggery outside the temple and there are a plethora of vendors selling the same. This village is famed for palm leaf astrology called Naadi astrology and you will see a profusion of authorised Naadi centres across the village. The Siddhamirtham tank within the temple complex is believed to cure all diseases as according to believers it has curative properties. The five-tiered temple tower is spread over a large area and around the sanctum are metal images of Subramanya, Nataraja, Somaskanda, Angaraka and stone sculptures of Durga, Dakshinamoorthy, Surya, Jatayu, Vedas and Sampati. This temple has all nine planets installed in single line, something not seen anywhere else in India. In fact this temple is believed to be the place where one can pray to resolve any kind of problems

Srimushnam a small town in Cuddalore is sacred to both Hindus and Buddhists being one of the eight Svayam Vyakta Ksetras of Vaishnavas. The presiding deity here is ‘Lord Bhuvaraha’ who is seen with his wife Ambujavalli Thayar and is said to have been formed naturally from a saligarama (black smooth round stone). The temple is ancient and has withstood the stand of time and what stood apart for me was its stunning architecture. Take a look at the pillars and you will find gems like an intricate horse with a warrior, figurines and even a beautiful lady whose braid has the most miniscule level of detailing. Do not forget to look up to the ceiling which is covered with intricate carvings that will make you wonder how the artists worked on them in the first place. Legend has it that Lord Vishnu resides in Srimushnam in three forms – ‘Ashwatha tree’, ‘Nithya Pushkarani’ and ‘Bhoovaraha Swamy’. The temple tank or ‘Nithya Pushkarani’ is said to have medicinal value and is seen as a panacea for all problems. The ‘Ashwatha tree’ is located close to this tank and is said to help childless couples. The main deity itself seems small in comparison to the exterior and the face in the form of a boar is turned towards South and the body that has a human shape faces West. There is a temple dedicated to Lord Sri Rama outside and the deity is in sitting posture making this a rare sight. 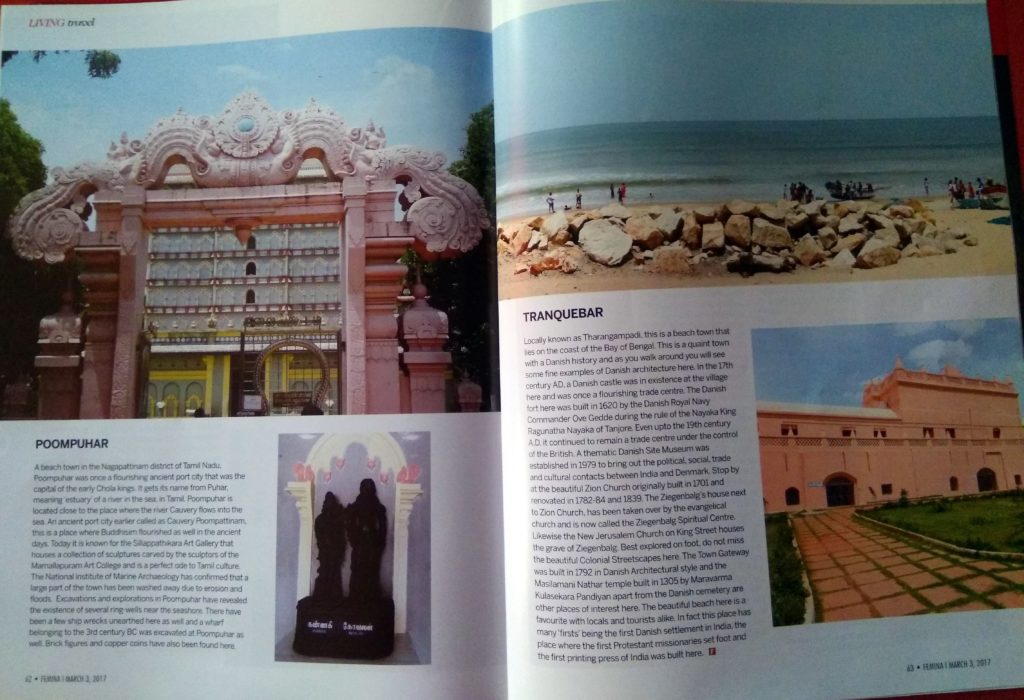 A beach a town in the Nagapattinam district of Tamil Nadu, Poompuhar was once a flourishing ancient port city that was the capital of the early Chola kings. Derived from Puhar that meand ‘estuary’ of river in the sea in Tamil, Poompuhar is located close to the place where the river Cauveri flows into the sea. An ancient port city earlier called as Kaveri Poompattinam, this is a place where Buddhisim flourished as well in the ancient days. Today it is known for the Sillappathikara Art Gallery that houses a collection of sculptures carved by the sculptors of the Mamallapuram Art College and is a perfect ode to Tamil culture. The National institute of Marine Archaeology has confirmed that a large part of the town has been washed away due to erosion and floods.  Excavations and explorations in Poompuhar right have revealed the existence of several ring-wells near the seashore. There have been a few ship wrecks unearthed here as well and a wharf belonging to the 3rd century BC was excavated at Poompuhar as well. Brick figures and copper coins have also been found here.

Locally known as Tharangampadi, this is a beach town that lies on the coast of the Bay of Bengal. This is a quaint town with a Danish history and as you walk around you will see some fine examples of Danish architecture here. In the 17th century AD a Danish castle was in existence at the village here and was once a flourishing trade centre. The Danish fort here was built in 1620 by the Danish Royal Navy Commander Ove Gedde during the rule of the Nayaka King Ragunatha Nayaka of Tanjore. Even upto the 19th century A.D. it continued to remain a trade centre under the control of the British. A thematic Danish Site Museum was established in 1979 to bring out the political, social, trade and cultural contacts between India and Denmark. Stop by at the beautiful Zion Church originally built in 1701 and renovated in 1782-84 and 1839. The Ziegenbalg’s house next to Zion Church, has been taken over by the evangelical church and is now called the Ziegenbalg Spiritual Centre. Likewise the New Jerusalem Church on King Street houses the grave of Ziegenbalg. Best explored on foot, do not miss the beautiful Colonial Streetscapes here and you can feel a blast from the past! The Town Gateway was built in 1792 in Danish Architectural style and the Masilamani Nathar temple built in 1305 by Maravarma Kulasekara Pandiyan apart from the Danish cemetery are other places of interest here. The beautiful beach here is a favourite with locals and tourists alike. In fact this place has many ‘firsts’ being the first Danish settlement in India, the place where the first Protestant missionaries set foot and the first printing press of India was built here.