Ankur Walia a Delhi based HR Manager with a media company who has been smoking since 2005, first tried e-cigarettes way back in 2010 as his office was in the 12th floor and the smoking zone on the ground. While he was looking at the convenience factor so he would not have to go down to smoke, it also helped that he could smoke an e-cigarette anywhere even with family. This apart, vapour being lighter than smoke would not settle on his clothes and smell so he decided that this would be a better option. However, as the drag of the e-cigarette is not as smooth, he admits that it has not really helped him quit smoking. As e-cigarettes become popular in India, we look at whether this is really the mid path between smoking and quitting. With Anti-tobacco Day (31st May) around the corner we also debunk myths associated with vaping. Read on to know more.

Electronic cigarettes are a type of electronic nicotine delivery system (ENDS) consisting of a cartridge containing a liquid, an atomizer (vaporization chamber with a heating element), and a battery. They turn liquid nicotine into vapour, imitating conventional smoking. But the devices heat the liquid at a lower temperature than the burning regular cigarettes require hence why the verb ‘vaping’ is used instead of ‘smoking’ for these products. The contents of e-cigarettes, called e-liquid or e-juice are usually made up of propylene glycol, glycerine, nicotine, and flavourings such as menthol, cherry, vanilla, or mint. Non-nicotine e-cigarettes are also available.

Vape as the name suggests consists on a coils that has cotton wrapped around it and this cotton soaks the liquid. “When these metal coils heat up (with the help of batteries) the liquid in the cotton evaporates and hence the name vapourizer. So the principle difference of combustion and vapourization makes these two things stand miles apart,” says Abhimanyoo Khatri, Co-Founder, BoxBourne Technologies. Most people take to e-cigarettes believing that they are a better alternative to regular cigarettes. “Although e-cigarette aerosol generally contains fewer toxic chemicals than the deadly mix of 7,000 chemicals in smoke from regular cigarettes, e-cigarette aerosol is not harmless. It can contain harmful and potentially harmful substances, including nicotine, heavy metals like lead, volatile organic compounds, and cancer-causing agents,” says Dr. Sachin Kumar, Senior Consultant Pulmonology, Sakra World Hospital. The aerosol created by e-cigarettes can contain ingredients that are harmful and potentially harmful including nicotine; ultrafine particles; flavorings such as diacetyl, a chemical linked to serious lung disease; volatile organic compounds such as benzene, which is found in car exhaust and heavy metals, such as nickel, tin, and lead. Although considered safe by many and practised as a less harmful alternative to smoking, it is not 100% safe. “E-cigarettes contain comparatively lesser nicotine, but still, there is some in it. Nicotine is already linked to various health problems and is addictive. Regular e-smoking can lead to full time cigarette smoking also. In fact e-smoking is harmful for the lungs and can lead to several health problems like lung damage, increased toxicity in the body, cough, lower immunity, gum problems etc. Vaping is a new trend and still needs more research, which increases the chances of many unknown side effects too,” avers Dr. Snehal Singh, Lifestyle Management Consultant, Healthians. Dr. Gyanendra Agrawal, Senior Consultant, Pulmonary & Critical Care Medicine, Jaypee Hospital, Noida adds, “e-cigarettes are a tobacco product, and no tobacco use is safe.  They use liquefied nicotine and produce less-harmful water vapor instead of harmful smoke. Most e-cigarettes contain nicotine, which is addictive and triggers changes in the adolescent brain. The aerosol contains solvents, flavourings, and toxicants which are potentially harmful. The substance that e-cigarette users breathe in and exhale can contain potentially harmful substances like nicotine, chemicals and heavy metals.”

Burns from the electronic device can sometime happen even while stored in the pocket or can occur during use due to malfunction. E-cigarettes may appeal to youth as an introductory tobacco product and to youth who would not smoke conventional cigarettes. However it’s use could develop nicotine dependence and later on switch to conventional cigarette smoking, thus increasing the number of tobacco users in the new generation. A flavouring chemical linked to a severe respiratory disease has been found in more than 75% of flavoured electronic cigarettes and refill liquids tested by researchers at Harvard University,” says Dr. Shalini Joshi, Senior Consultant, Internal Medicine, Fortis Hospital, Bannerghatta Road. The long-term health consequences of e-cigarette use are largely unknown. In the absence of clear data on the health consequences of e-cigarette use and their efficacy for smoking cessation, evidence-based definitive recommendations cannot be made. Dr. Gowri Kulkarni, Head of Operations, DocsApp adds, “exposure to tar and toxic substance is less when using e cigarettes the fact remains that Nicotine in the e cigarettes is known to cause long term effects like rise in blood pressure, suppression of appetite, increased risk of Type 2 Diabetes, increased risk to other substance abuse, impaired brain development especially in adolescents. Cigarettes essentially are hazardous to health be it the regular one or the e-version.”

The substance that e-cigarette users breathe in and exhale can contain harmful and potentially harmful substances like nicotine, chemicals and heavy metals. Because these products are not regulated, it is impossible to know what is in inside an e-cigarette. A recent study, conducted by UNC School of Medicine and published in the American Thoracic Society’s American Journal of Respiratory and Critical Care Medicine, found that not only do e-cigarettes trigger the same immune responses that normal cigarettes do; they spur unique immune responses, too. It comes down to how our bodies process foreign substances. E-cigarettes are not currently approved by the FDA as a quit smoking aid. Pooja Duggal, Founder, HealthHunt adds, “according to a recent study conducted by the Center for Disease Control and Prevention (CDC), between 2011 to 2013, the number of non-smoking youth who tried e-cigarettes tripled from around 79,000 to over 263,000. ‘In some circumstances, such as their use by non-smoking adolescents and young adults, their adverse effects clearly warrant concern. In other cases, such as when adult smokers use them in order to quit smoking, they offer an opportunity to reduce smoking-related illness,’ said David Eaton, chairperson of the National Academies of Sciences, Engineering, and Medicine (NASEM).” A recent CDC study found that many adults are using e-cigarettes in an attempt to quit smoking. However, most adult e-cigarette users do not stop smoking cigarettes and are instead continuing to use both products (known as “dual use”). Researchers at the New York University School of Medicine in New York City found that mice exposed to e-cigarette vapor experienced DNA damage in the lungs, bladder, and heart, which could increase the risk of cancer and heart disease. According to the report, “such damage was also found in cultured human lung and bladder cells that had been exposed to e-cigarette vapor for the equivalent of 10 years. E-cigarettes are not approved by the Food and Drug Administration (FDA) as a quit-smoking aid, after the U.S. Preventive Services Task Force concluded that there is insufficient evidence to recommend for or against [their] use for smoking cessation.”

Even as several studies have underscored the dangers of e-cigarettes, their import, distribution and sale has been growing in India’s unregulated markets for a decade. It is a global business worth an estimated $3 billion, with 500 brands and 8,000 flavours. “Despite a federal requirement that purchasers be at least 18 years of age, the use of the product in popular culture, combined with its fruity flavors, has proved a strong draw to younger, would-be vapers.  These characteristics have been at the core of keeping youths interested in e-cigarettes,” explains Dr. Agrawal. The cost of an e-cigarette ranges between Rs. 500 and Rs. 5,000. Between 30% and 50% of the Indian e-cigarette market is online, and China is the biggest supplier. In fact it is the youth that are getting lured to try it as an alternative to smoking. As Pooja Saha, a 24 year old Delhi based PR Consultant says, “one of my office colleagues had bought many vapes from abroad and all of us in office got hooked on to it. Also in my case, smoking was causing a lot of body heat and I disliked the smell of the same on my fingers, so vaping was a better alternative. However I would not agree it helps quitting smoking as they are quite different.” In India, ITC makes EON vaping devices. India does not regulate e-cigarette sales, making it easy for children and adolescents to buy vapes online. As of 2014, E-cigarettes have been banned in some countries like Brazil, Singapore, Canada, and Uruguay. The EU Parliament approved a directive that regulates nicotine-containing E-cigarettes with concentrations up to 20 mg/mL as tobacco products.  Five Indian states has banned vapor products – Jammu and Kashmir, Karnataka, Punjab, Maharashtra and Kerala and e-cigarette use is also banned on airplanes. The bottom line however remains that vaping is not the middle path between smoking and quitting. Choosing a healthy lifestyle means you need to wean away from smoking and e-cigarette is still smoking, probably worse. So be aware and take steps to have a healthy lifestyle.

This story appeared in the May 2018 issue of Smartlife Magazine here: 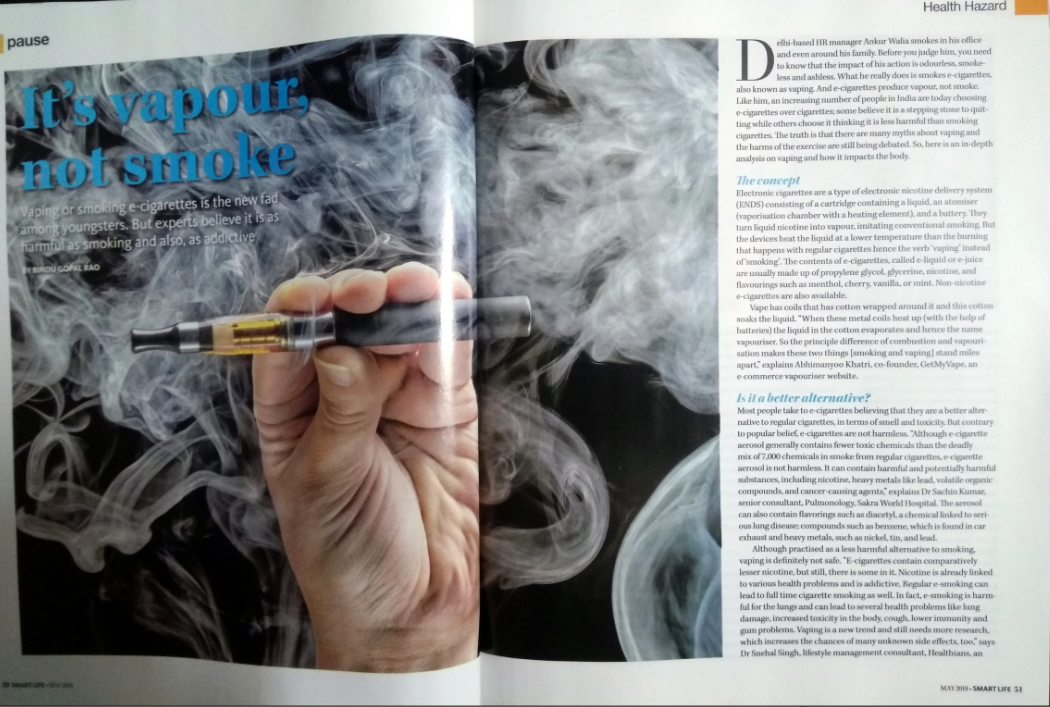 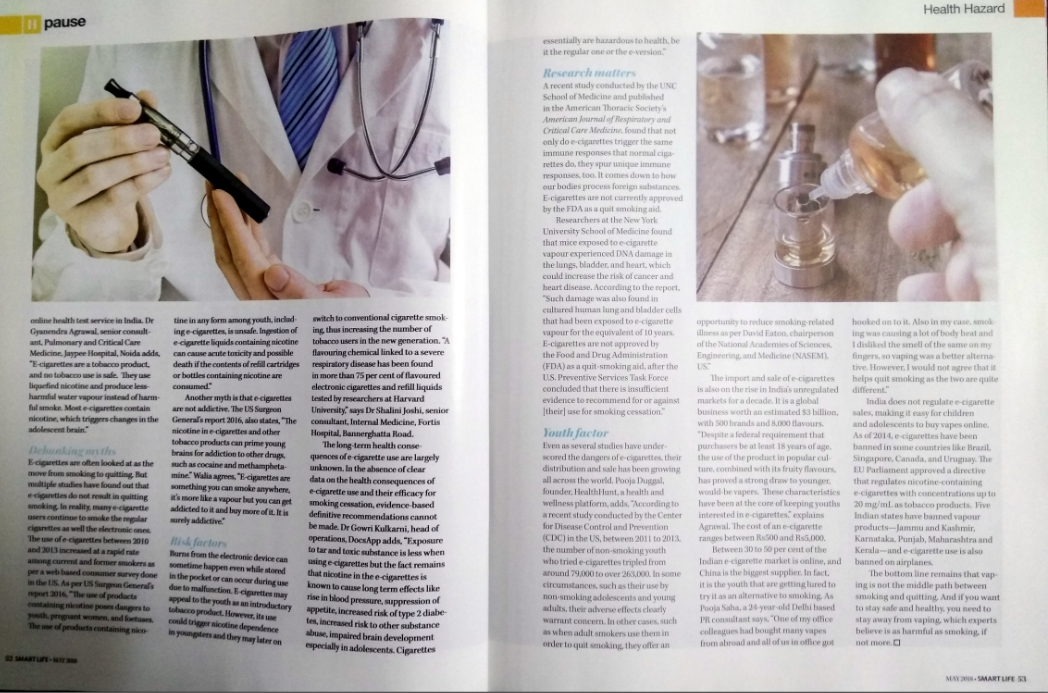