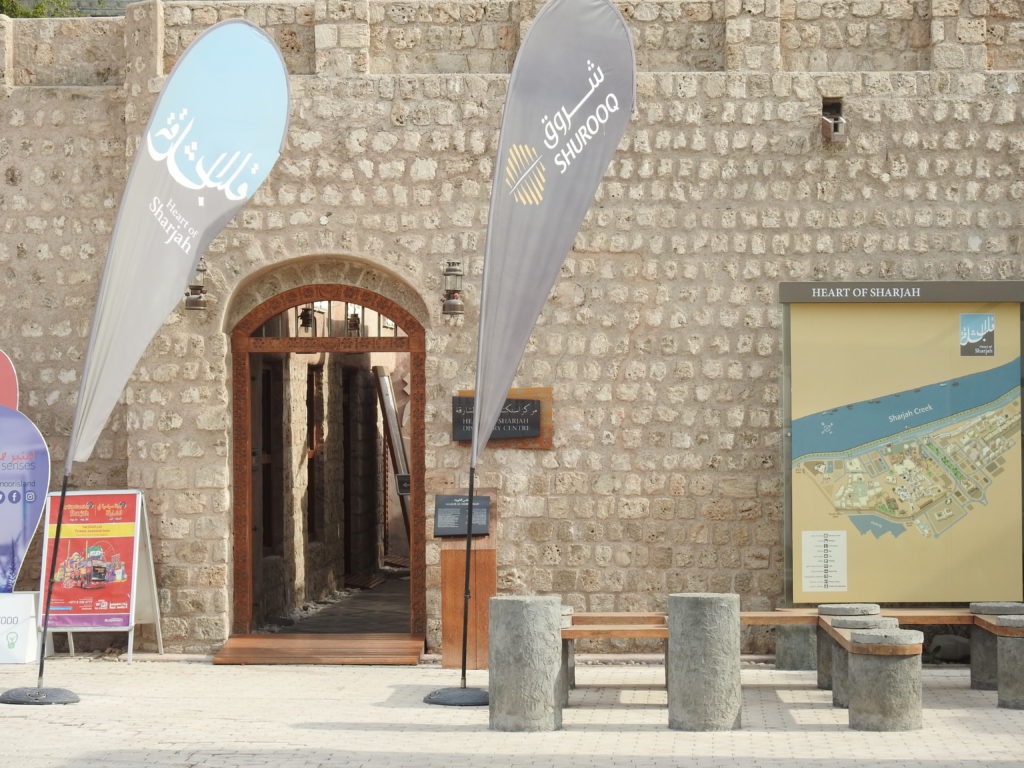 As I was reading a little book in the hotel lobby, my guide came up to me and said, “Sharjah is the city of museums. We have a museum dedicated to almost everything.” And indeed that was certainly true as the book I was reading has a listing of all the numerous museums in Sharjah. So I decided the best way to start my sojourn in Sharjah would be to visit the Sharjah heritage Museum. And while the United Arab Emirates (UAE) may be better known for its glitz and glamour, Sharjah is the known as the cultural capital of the UAE and I found out exactly why on this trip.

Housed in a beige brown building, aptly called the ‘Heart of Sharjah’ this museum has several galleries that showcase the heritage and traditions of Sharjah and the UAE. The interactive displays take you back in time and allow you to touch the raw materials that were used to build traditional homes. Also you can check out traditional games and find out how people survived the harsh climate by using plants and animals in their surroundings. This is a great way to familiarise yourself with the traditional celebrations, wedding ceremonies, music, clothing, jewellery, food and also trace the early trade routes between the UAE and nearby lands. Saeed Bin Mohammad Al Shamsi once lived in the building that now houses the museum. The house was built by the Al Qasimi family in 1795 and is made mostly of coral, chandal wood, palm, jus mortar and plaster. This traditional fortified house is divided into two sections on the east and west. The upper floor has three square towers that were mainly used for defence purposes. These towers have small windows and battlements that helped protect guards when firing on the enemies below. Two of the towers face the desert as Sharjah was more prone to attacks from the land. Since historic buildings are an important connection to the past, restoration helps preserve this for the next generation. This musuem is part of the ‘Heart of Sharjah’ restoration project. Once you have had a fill of history, step into the Al Arssa Souq next door for some retail therapy. Arsaa market is said to be one of the oldest and most popular markets in the UAE and houses small shops selling brass antiques, silver, wood, jewellery, pearls, clothes, medicinal herbs, dates and more. The Al Arsa Cafe here is akin to an old Irani cafe and serves among other things some delectable Arabian and Turkish coffee. 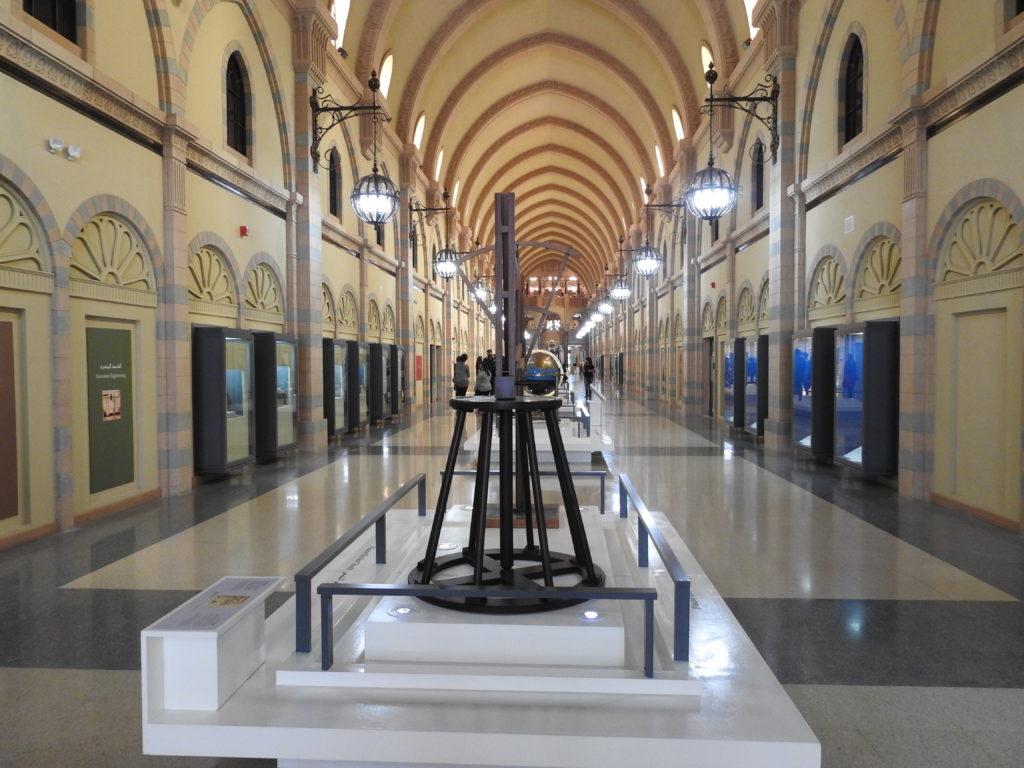 My next stop was the Sharjah Museum of Islamic Civilization whose external facade has brown brick and cement grey detailing with minarets that will make you stop for several photo ops before you enter the building. This museum has thousands of unique Islamic artefacts and is a definitive guide to everything to do with the Islamic faith and culture through its 5000 plus historical artefacts over seven well laid out galleries. The Abu Bakr Gallery of Islamic Faith introduces you to Islam and the Holy Quran through manuscripts, photographs and presentations. Likewise the Ibn Al-Haytham Gallery of Science and Technology showcases achievements of Islamic science in the fields of astronomy, military technology, marine navigation, medicine, mathematics, chemistry, geography, architecture and engineering through the use of several 3D models. There are four Islamic Art Galleries that have several artefacts including pottery, historic artwork, metalwork, crafts and weapons, woodcarving, manuscripts and more. The Islamic Coins Display has a great collection of early Islamic coins. For me however it was the ornate interiors with long corridors and matching light fixtures on either side that created a stunning visual impact. Do not forget to go to the top floor where a constellation is painted on the ceiling and its blue-gold shades have all sun signs represented too!

There are several other museums in Sharjah that you can visit but if you are walking around especially around the water front it is impossible to miss the architecture of the mosques and buildings here. Special mention must be made of the Al Noor mosque at the Khaled lagoon that has a pure white facade that comes to life during the annual Sharjah Light festival when the mosque morphs magically into a kaleidoscope of colours and patterns. Likewise the Central Souq, commonly referred to as the Blue Souq has a design that resembles a train and has intricate detailing on the facade in shades of blue. And not to forget nature – checkout the Sharjah Aquarium that is home to about 100 marine species native to the region’s waters. The Natural History Museum has seven galleries that allow you to explore landscapes and wildlife from east to west. In fact this is where you can see several endangered and ‘extinct in the wild’ species of animals as well. Photography of animals is prohibited so you can make the most of seeing them and learning about their habitat while you are here. On my last day here, I headed towards the Al Majaz waterfront for a walk and could not take my eyes of the hundreds of seagulls that made for a picture perfect sight here. As the sun rose, the waters took on a golden hue and with the row of boats on one side and the impressive tall buildings on the other, it made for a picturesque sight. This in a way summed up my entire experience here – Sharjah is a city that blends its culture with modernity so seamlessly that it never for once feels forced. And therein lies the charm of this city – that welcomes you with open arms and in that embrace teaches you so much that you will want to come back again and again!

This story appeared in the Week online here.

This post was made possible by Sharjah Tourism and Air Arabia. 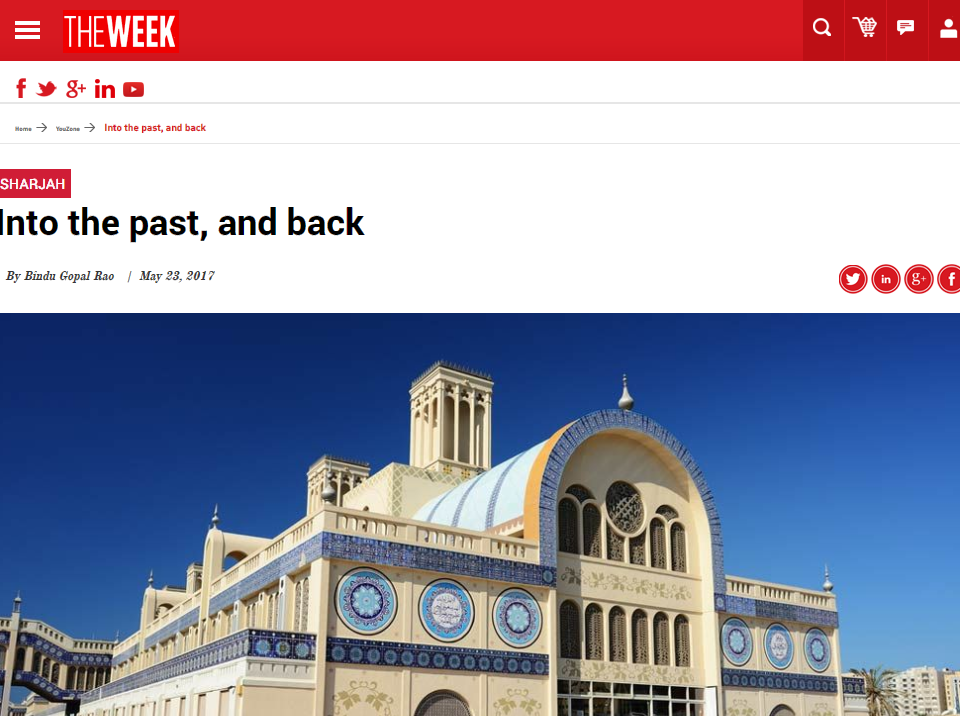