When I was invited recently to be part of the Madhya Pradesh Travel Mart, I had a tough choice to make – well it was to choose between visiting one of the two famed National parks of the state – Bandhavgarh and Kanha. I finally decided on the former and soon I found myself outside the Park on a chilly morning on the last day of October. Having been on safaris for the last 13 years, I had never sighted the elusive tiger and even the safari I did before this again in Madhya Pradesh’s Pench was a no show as far as the tiger was concerned. However being someone who enjoys the jungle for all its sights and sounds, I was excited once again to venture into the wild.

Our safari was from Gate 2 or the Magadhi gate and our guide Mohan Singh was an old hat with close to 25 years of experience. Our first sighting was of the Sambhar and Mohan started giving us an anecdote on how they are considered the most foolish animals in the jungle. “Well they are an easy prey for the tiger as they keep lying down in the water or on the ground and if they sense the tiger, they check if one is around by walking a few steps in that direction. Also when they are being chased, they actually keep looking back and fall prey.” While that generated a round of laughter, ten minutes into the safari, Mohan suddenly stopped the vehicle and said the magic word “tiger” and my first reaction was “where? I cannot see anything.” As I looked around in the thicket, I could see nothing. Navigating the vehicle to a vantage point, I suddenly see it walking magnificently at a distance but it is hazy as there was a considerable distance. “Don’t worry he is coming to drink water,” assured Mohan and sure enough, the tiger suddenly disappeared while all the safari jeeps clamoured for its attention. However the king of the jungle decided to take his own time to quench his thirst and after a few minutes rose out and majestically walked past all of us (we were in all close to 50 people in different vehicles). And while all of us aimed our cameras at him, T37 or Bamera’s son as he is called could hardly care less as he nonchalantly walked past giving all of us a thrilling start to the game drive. In fact for me this was a first seeing the tiger in the wild and to watch the most beautiful animal in its home turf is awe inspiring. You simply cannot take your eyes off the tiger and for good reason – no wonder he is the king of the jungle! The bright stripes of the tiger make for a striking contrast against the dull green grass. And as he walks past his packed audience who cannot stop taking pictures, he hardly seems to notice.

With a start like that, we headed further into the beautiful jungles that has mostly sal trees close to 70 percent of the jungle has sal and bamboo trees as well. Soon enough, came our next treat a wild boar that however decided not to pose for any pictures. Going ahead, we also spotted a family of Nilgai (a rare species of the Sambhar family) that decided to sprint past our jeep and seeing the five of them in different sizes was a wonderful treat indeed. The topography of the forest is varied and there are 250 bird species across 53 families with 138 resident, 26 local migrants and 86 migrants species. Naturally being a haven for birds we were lucky to spot a whole lot of them including the Crested Serpent Eagle, River Ducks, Indian Rollers, Crested Hawk Eagle, Kingfishers, Jungle Barbets, Indian Longbilled Vultures – we saw four magnificent ones. Of course the jungle is full of spotted deer and peahens and peacocks too. Interestingly this is also the time to spot several kinds of spiders who spin huge webs and pose happily in the center. It is a visual delight and a photographer’s must take picture. Specifically we also saw a lot of funnel spider webs that are said to be a poisonous variety as they instantly suck in little insects that come near them. The flora and fauna of the jungle is most amazing too and we saw a parasite plant that twists itself around a healthy one eventually killing the latter. Even the beautiful orchids that grow over huge trees are a must see. While they were not flowering, Mohan tells us that the orchid is beautiful when it blooms.

The forest here is known to have a high density of tigers and hence spotting one is easier here as compared to the other forest in Madhya Pradesh. This apart, leopards are also present in large numbers apart from barking deer, sloth bears, wolves, fox, sambhar and more. The park has three main zones Tala, Magdhi and Khitauli which form the core jungle where game drives are allowed. The buffer zone covers Umaria and Katni. The forest is filled with a white coloured grass that gives it a magical feel as well. In fact that is where the real beauty of the jungle lies – where else can use see nature abound and untouched by pollution but here! So when you head out into the wild, look around everything, you never know what you will see.

This story appeared in the Jan 2018 issue of Adventure & Wildlife magazine here: 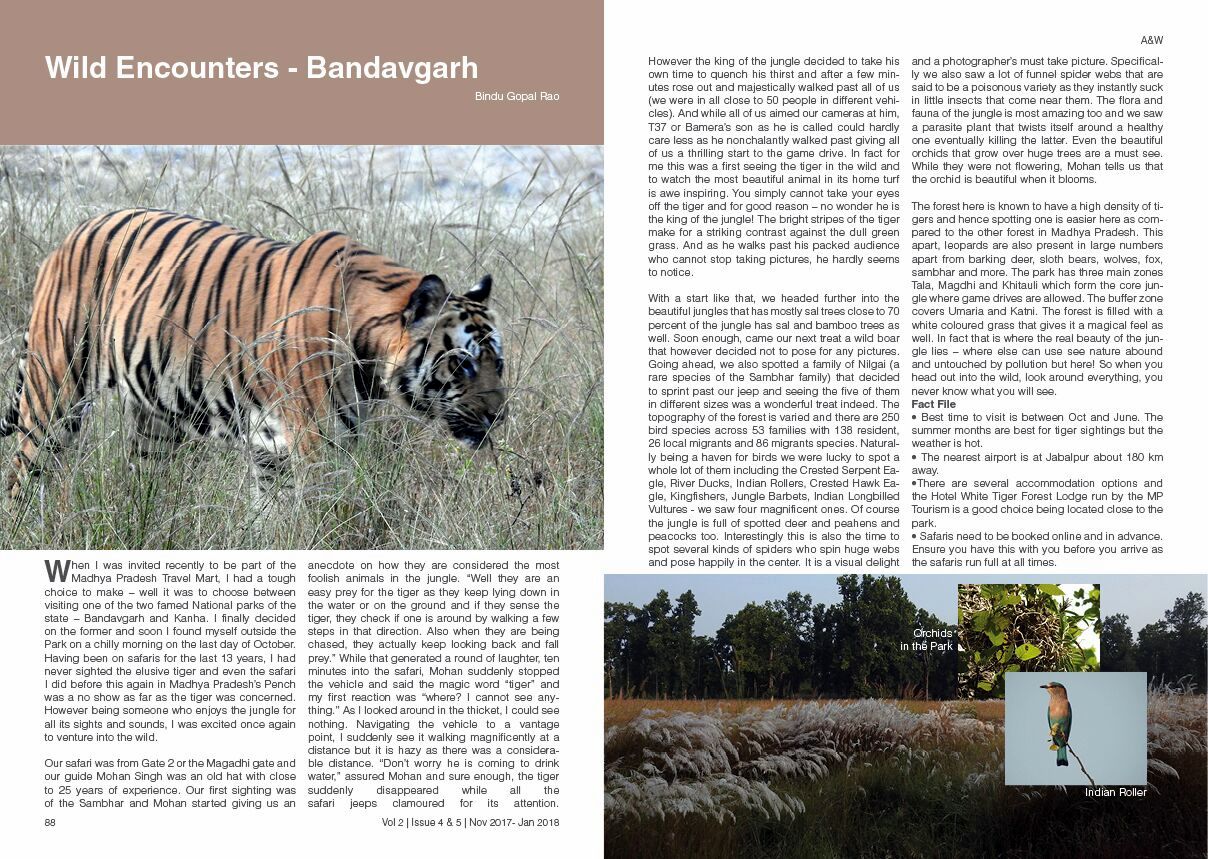