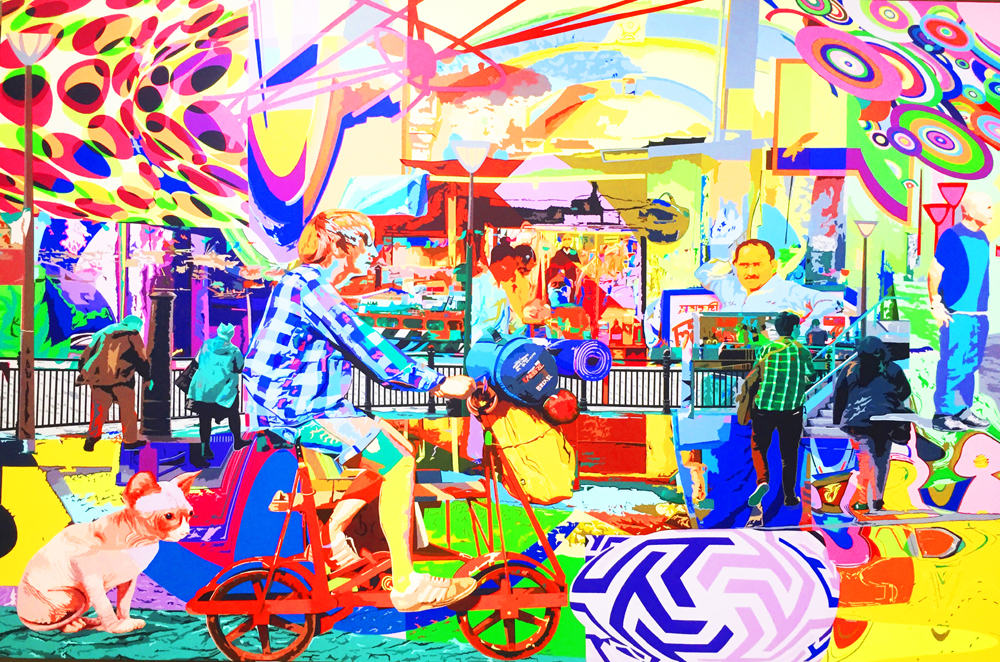 “Art speaks where words are unable to explain” said Threadless artist Mathiole. And when art is manifested in myriad forms like the work of George Martin PJ, you know exactly what Mathiole meant. The first recipient of Art India Magazine’s Promising Artist Award in 2005, Martin is now showcasing his work Paintings, Sculptures and Installations at an exhibition of narratives that delve into understanding the everyday lives and our relationships with realities. His paintings are a spectral of luscious colour and he paints acrylic abstractions that have copious amounts of energy and are an ultimate representation of modern urban life. “So Far So Good becomes a satirical expression when we pause to gauge our performance in the absurd theater of life where we put up an act of ‘being’ and ‘existing’. It somehow depicts our strange strategies which we adapt to, within this journey of life. We are bombarded with various realities the world has to offer; we negate through these continuously until we come up with reactions which guides us towards a utopian dream. In this body of work ‘So Far So Good’, we can see a narrative which represents the distorted, mundane realities which are juxtaposed with bits and pieces of humor and satire. There is a conversation happening here through the images, illusions, forms, colour, flatness, symbolisms, pastiche and a vivid visual texture. The artworks, each in their own distinct raised platforms are trying to narrate their happiness and trauma at the same time to the prospective audiences in their own subtle ways,” says George.

Interestingly while his paintings are a burst of colour, his sculptures are in monotones. “In the very beginning of my artistic practice, I was fascinated with the psychedelic colour palette; those colours can be a representative element in connecting with the subconscious. All the colours in existence arise from the primary colour palette and are dived into further subdivisions to obtain more hues. However, all these colours fall within the main categories of either warm or cool colour scales. They have the ability to reflect and influence human emotions, and its effective usage can impact in enhancing an ambience. There are many layers of these understandings behind the images and forms in my artworks. I have attempted to invoke greater meaning possible by the use of colours and experimenting with them.  Throughout the process of image making, I often insert and compress images over many layers and create an optical illusion using a convex/concave application. By repeating this process through several permutation and combinations, I arrive at a visual language which I use as a symbolic representation of the augmented, absurd realities in which we live.”

During his art practice, he has made few attempts to explore and represent the evolution of identity. “I have done this exploration in terms of variety of materials and mediums. The way in which the representation of the ‘self’ works in three dimensions is absolutely intriguing. In this body of work, I see them as gestural sculptures which are momentary icons of the present-day situations. Each of them acts as a mimic, seemingly playful, but frozen in time. I normally scale them down and make them as detailed as possible because I aim to invite the viewers for a closer inspection.” For someone who believes that connection is important, he shares his ways of finding that connection with himself and objects and connects culture context with the new environment to find new challenges and new possibilities. “I started with some found objects then connected to just opposite shape and form interplay with negative positive spaces. So they exist in the space alone, rather than narrating they self-defined. The viewer can investigate the reason behind the connection of metaphor.” Looking ahead, he is planning to work on a new body of work and ideas which have stemmed from the experience of making ‘So far, So good’. “I also want to capture ideas which I could not achieve in my previous body of work as well. A great amount of time will go in accomplishing this. However, before this I wish to travel through the States of North Eastern India. Instead of trying to meticulously plan and strategize I try and let the journey unravel on its own path, this way it is more worthwhile,” he concludes.