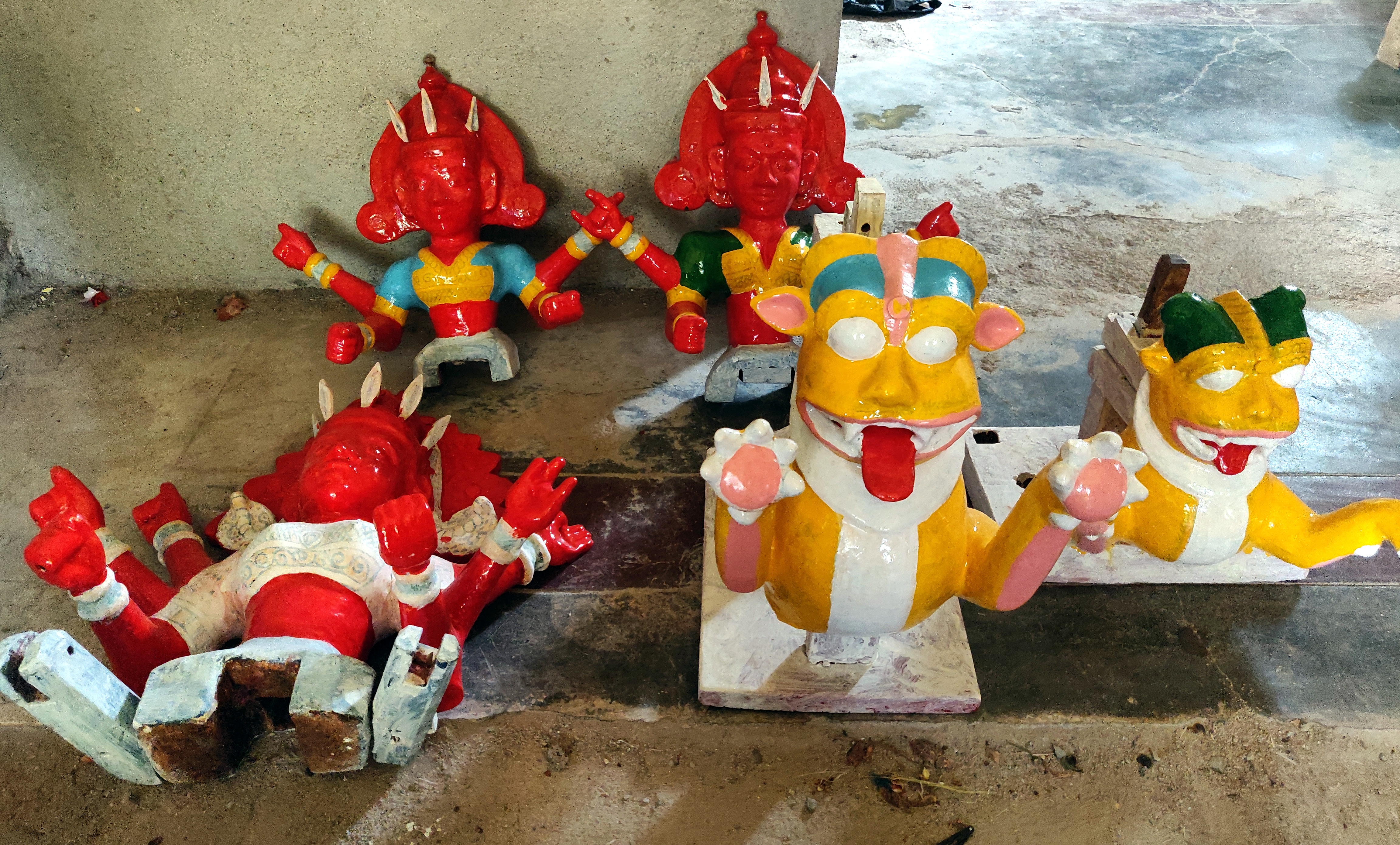 A small village in Koppal District in Karnataka is home to a few craftsmen (called chitragara) who continue to make wooden dolls.

On a recent trip to Hampi I decided to go off the beaten track and explore some of the surrounding villages instead. I had researched on Kinnala and had set my mind to explore the same but to my surprise hardly anyone at the resort I stayed knew of the place. However I did not give up and relied on Google Maps to reach the village. The ride from Hampi takes close to two hours on several bumpy stretches of road. The village itself is a small, sleepy place and after making a few enquiries I was directed to a small lane where I found a few artists at work.

My first stop was at a rather run down little shop that had a lot of wood logs stacked outside where I met Anand, an artisan who has been making dolls for the last eight years. For someone who has been handed down the craft from his grandfather and father, he is part of the small set of roughly 25 Kshatriya families who continue making the dolls to date. Rather reticent initially, some cajoling and he tells me, “the wood we use to make these dolls is grown in nearby Gangavati and is locally called Ponikiwood which is a soft and light wood that becomes lighter when dried. We make standard images of Gods and Goddesses like Kamadhenu, Hanuman, Garunda, Siva Parvati, Ganesha and others. Each doll takes anywhere from 15- 30 days depending on the size. So it is a time consuming process and hence not enough to sustain our livelihood. Also since there is a lot of effort in making them, it is quite expensive and people tend to bargain and return without buying the pieces. More than materials it is the effort and patience that is required to make the dolls that is becoming a deterrent to the next generation to take to the craft.” The artists use a combination of paints from water colour to oil paints to finish the dolls.

The art of doll making in Kinnal village dates back to the days and times of the Vijayanagar Empire and there is a reference to the craft in Hampi especially in the wooden statues at the Virupaksha temple. At the village I also meet one of the oldest craftsman here Ekappa who has been practicing the craft for 48 years and is one of the main persons who has taught the next generation. “It involves a lot of hard work and there is a need for people to recognize the art and give its due for it to survive,” he says when I ask him what are the challenges he sees in the continuity of the craft. Since there is a lot of effort that goes into making the dolls a lot of work is done based on prior orders. The larger dolls are usually part of temple festivities.

The process of making the dolls is quite complex and uses a lot of traditional methods and locally available ingredients. As I make my way to another artist’s workshop I see a flurry of activity happening. I meet Savitri who is busy making a red hued paste that is like the adhesive applied on the wood base. This I am given to understand is a mix ground tamarind seeds, sawdust and gunny or jute pieces that are mixed together. Santosh, a 26 year old artisan is busy making the dolls and explains the process to me. “We first cut the desired shape from the wood and then it is chiseled into design we want. The facial expressions are finished and shaped using sawdust and tamarind seeds so we get the right expressions on the eyes, nose and mouth. Then we use cloth to wrap the doll so that it retains its shape. Then we use chalk powder to whitewash the doll which has two advantages as it smoothens the surface and since it is white the colours we paint show well. Then wood primer is applied on the dolls.” It was here that I asked if they had any dolls for sale and I was told that artists do not have many spare dolls that you can actually buy off the shelf. I was however lucky to find two figurines of Garuda and Hanuman that I picked up immediately and as I made my way back from the village, I was glad that I had a part of it with me.