“All lasting business is built on friendship.” ~ Alfred A. Montapert

Clearly these words seem to resonate well in today’s new age businesses. When I started doing this story, I got a plethora of responses that all pointed out to one direction – how good friends had become successful business partners.

Who knew the journey to eat good food would lead to a long-lasting friendship? Jinal and Vandhana started their friendship over a scoop of their favourite ice cream, which developed a strong bond over many lunches and coffee conversations. Working in an ad agency together, these two head-strong Arians decided to team up together and start their own journey with their first digital marketing agency – Lets SOS in Chennai. Jinal was initially working in an agency as a Client Relationship Manager and Vandhana soon joined the same company as a Social Media Manager. Apart from finding out that they shared the same sun sign, Jinal and Vandhana realized they had a lot in common mainly their need to be financially independent and successful. They started working together for a lot of clients and attended meetings together for almost 2 years. The inception of Lets SOS happened during a casual conversation while planning the anniversary celebrations for the company they were working for. From event management to wedding planning, the two women brainstormed ideas and finally decided on starting a Digital Marketing agency. With Jinal’s vast network of contacts and Vandhana’s experience in the Marketing & Advertising industry, they decided this will be the best fit to start their entrepreneurship. 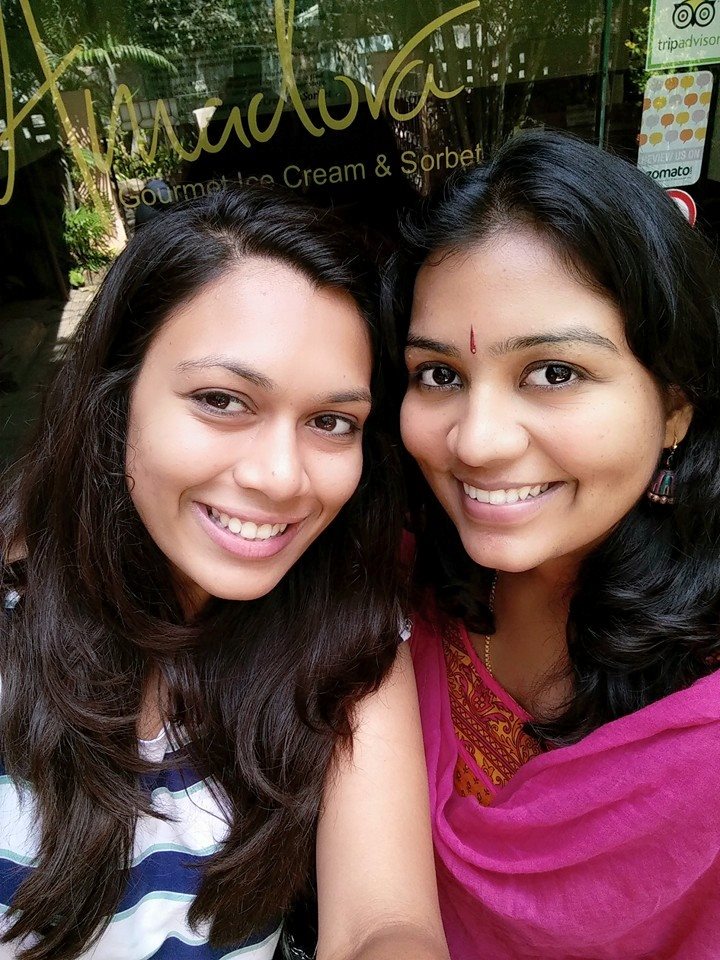 On a related note, FabAlley Co-Founders Tanvi Malik and Shivani Poddar met each other in 8th grade at DPS Mathura Road, Delhi and have been friends since then, which is for more than 15 years now! As business partners, it has been 5 years and they helm the quirky and young fashion portal faballey.com. “As friends, we always were close to each other and stayed in touch. Growing up as girls we always realized the need for affordable fast fashion along with complimentary skill sets both of us have that is fashion and marketing for Tanvi and finance and logistics for Shivani. All these factors made combined with the fact that we have been through thick & thin and developed a great comfort level which made us come together as business partners a start our dream project FabAlley,” say the duo. Likewise Bangalore based Arka Communications was started by two friends Purvi Shetty and Tejasvi Murthy who worked together at a communications agency and became good friends. “Both of us met at an agency called Brand-comm. We weren’t working together on any projects but we hung out as friends quite often. We have known each other for more than 7 years and have been business partners for a little over 3 years. We decided to work together because we both think creativity is the key to building efficient communication strategies. We also had a lot of mutual admiration and respect for each other’s work,” avers Purvi.

Weighing the Pros And Cons

Being friends is one thing but being associated professionally is another. In fact there is a strong lobby that advocates not mixing personal and professional relationships but it does seem that there is a right way of doing this. The comfort level, trust, covering each other’s back and standing by each other during difficult times are factors that definitely work. “We feel that drawing the line between personal and professional space is very important. So after working 9am-8pm every day in office we leave our friendship outside and hang out as friends over weekends. In field of business it is important that we don’t bring in emotions and be objective driven in evaluating the decisions correctly,” say Tanvi & Shivani. 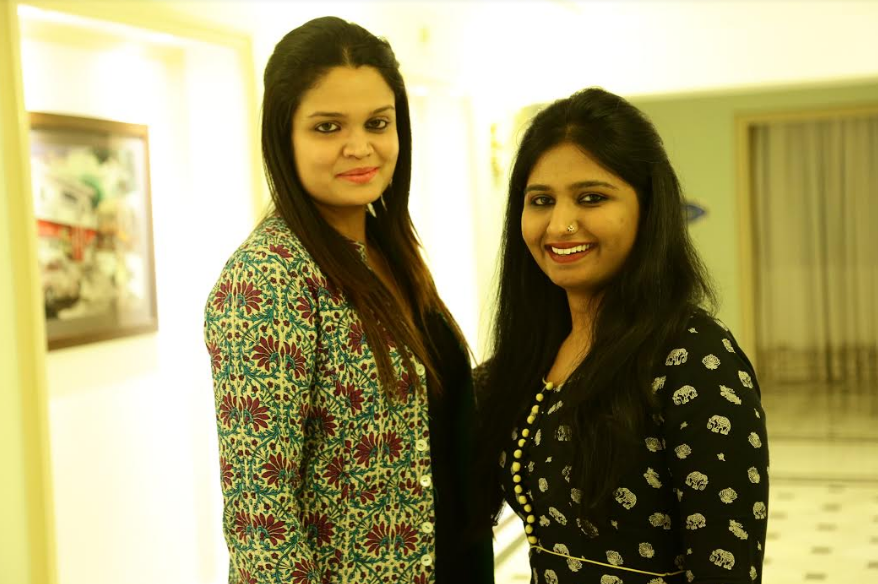 Working together in a new role can be tricky and there could be situations where things can go awry too. However Tanvi & Shivani recollect a situation in the first year of starting FabAlley, “we were really looking to get our first funding and after lot of efforts we got a meeting with an active investor who gave us a kind of ‘take it or leave it’ offer which was a low ball offer. The situation is difficult as we really were in need of funds but we both could understand each other’s expressions and without saying a word we could evaluate what the other person wanted to say and we declined.” “In being good friends, we automatically trust each other in any decision that is made and hope for the best. Sometimes, when business does not fall through, we start losing the trust we have on each other in the fire to do good business,” say Jinal and Vandhana have experienced many instances when the trust has been put to question, especially in the initial few months where a long distance communication had to be maintained due to lack of an office space. Understanding each other’s character and faith in their dedication had really helped them go past the stage and achieve success in their first business. “The passion for doing something different and understanding the challenges women face every day as an entrepreneur and a working mother, resulted in starting their next venture, WSquare (workplace for Woman) is a co-working eco-system for women. “You can always tell who the strong women are, they are the ones you see building one another up, instead of tearing each other down.  Friends are women who know all about you, and yet like you anyway! Transparency and faith are the two critical factors that can make or break your friend and partnership,” opine Jinal and Vandhana. Being friends does not always make good business partners and vice versa but a long healthy friendship always helps. At the same time history and relationship has to be kept aside if your aim is to achieve sustainable business. “A lot of people warned us against doing business with friends, on the contrary, we believe it’s one of the best decisions we have ever taken! We strongly believe that women can help other women grow,” say Tejavi and Purvi. Hard to debate that one!

This story appeared in the April 2017 issue of New Woman magazine here: 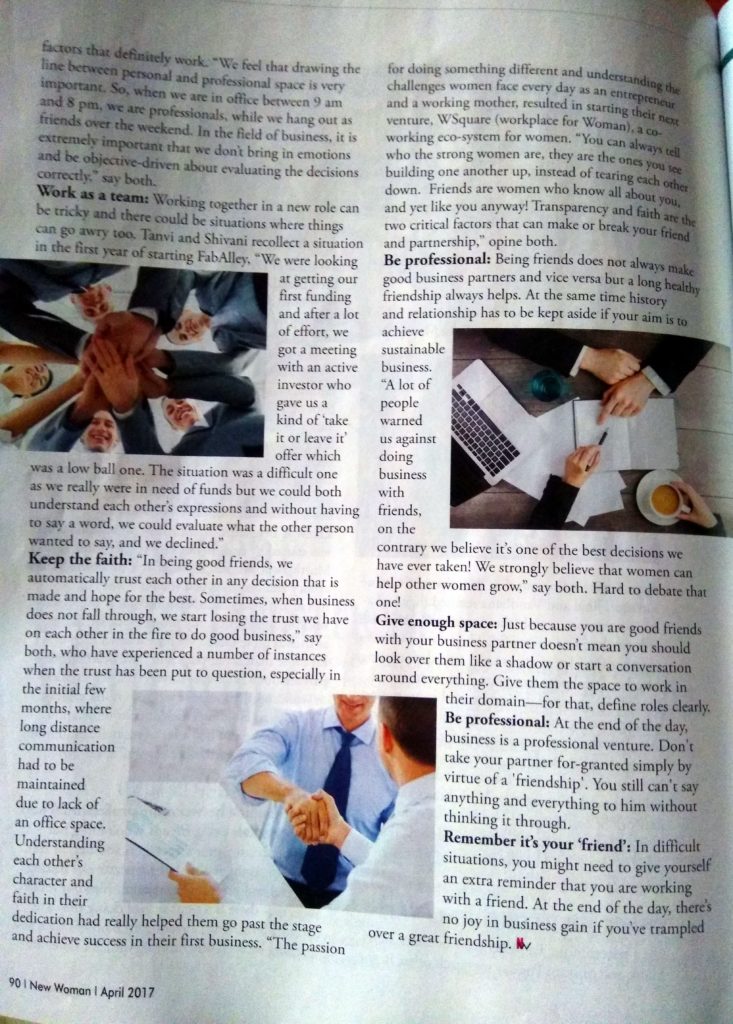