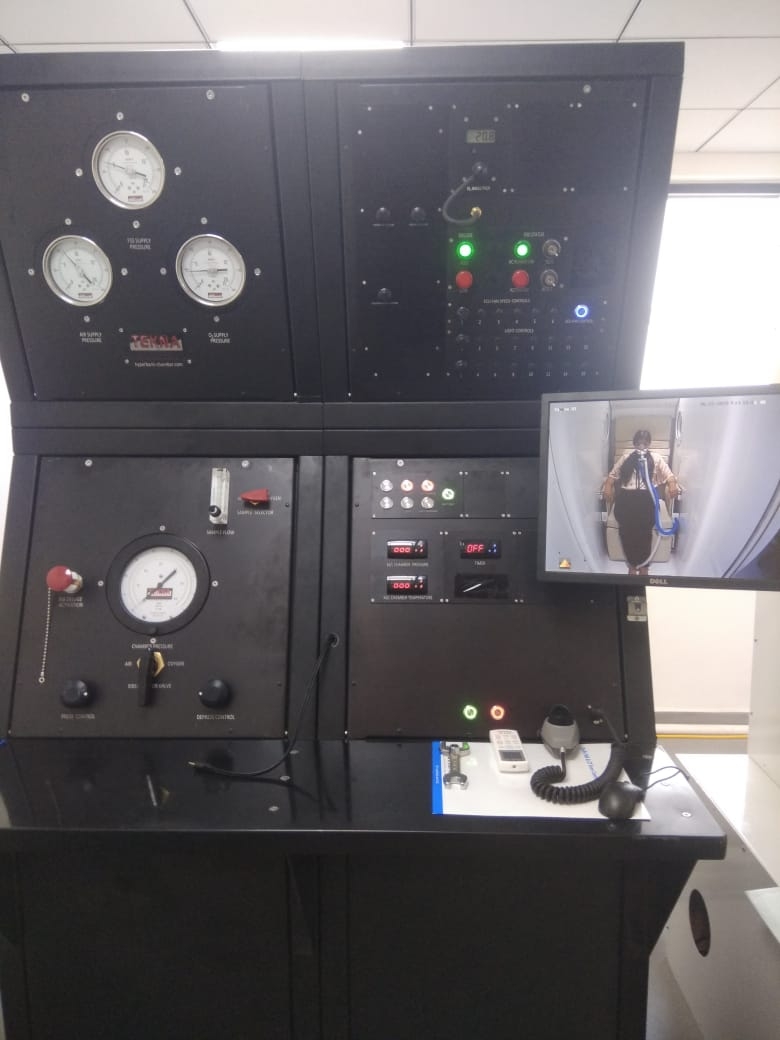 Treatment for serious health issues like Cancer and HIV now has a ray of hope from new age treatments like Hyperbaric Oxygen Therapy (HBOT) and Ozone Therapy.

Hyperbaric oxygen therapy is an FDA-approved therapy that involves breathing of pure oxygen (100%) in a pressurized chamber. The purpose is based on the fact that oxygen at high pressure is pushed into cells, tissues, and fluids of the body, thereby promoting healing and rejuvenation. Ozone therapy works in a similar manner and involves administration of the molecule (O3) via injection, topical, gas bath, or ozonated water routes. Ozone is never inhaled as it can cause toxicity, due to the unstable nature of the molecule. The fundamental difference is that HBOT uses oxygen under pressure and ozone therapy uses ozone as the compound, which is able to generate messengers crucial for activating several biological functions.

HBOT was originally indicated in decompression sickness, as seen in divers, astronauts, to normalize pressure of blood gases in the body. Dr. Pradeep Mahajan, Regenerative Medicine Researcher, StemRx Bioscience Solutions Pvt. Ltd. explains, “we breathe in oxygen, which then passes through the lungs into the bloodstream, wherein it is utilized by cells and tissues. A simple example of cellular utilization of oxygen would be uptake of the gas by hemoglobin present in the red blood cells, which is then spread to all parts of the body. Subsequent research revealed that this treatment can be utilized in conditions associated with compromised blood supply to tissues and organs, such as in cases of wounds, gangrene etc. HBOT works on the principle of cell proliferation, tissue oxygenation, collagen synthesis, angiogenesis, and subsequent healing. “Ozone therapy works on a similar principle. Medical grade ozone therapy has been shown to be beneficial in several infectious as well as inflammatory conditions. Ozone has been shown to have antibacterial properties. In addition, this molecule also has anti-inflammatory and hemodynamic properties,” says Mahajan. It is now known that both therapies are beneficial in neurological conditions as well. The proposed mechanism behind the effects is related to reduction in cerebral edema, normalization of the water content in the brain, decrease in the severity of brain infarction, and maintenance of the integrity of the blood–brain barrier. These therapies also increase blood flow, and perfusion of tissues. This aids in improvement of motor deficits caused by conditions such as stroke and other circulatory disturbances. Effects of HBOT and ozone on cell survival and proliferation, inhibition of brain cell death also aid in improved outcomes of conditions such as Parkinson’s disease, multiple sclerosis etc. HBOT and ozone therapies have also been shown to be beneficial in respiratory disturbances, blood-related conditions such as anemia, neuropsychiatric conditions, sleep disorders, and more.

Dr. Himanshu Agarwal, MBBS, M. D, Hyperbaric Oxygen Therapy Expert, Fortis Escorts, Jaipur, explains, “firstly, a patient needs to be taken to a pressurized chamber and with increased pressure during hyperbaric oxygen treatment more and more oxygen is dissolved into the blood plasma. The amount of O2 dissolved in upto 20 times than normal levels, thereby increasing the amount of oxygen in the patient’s blood. The high level of oxygen in the blood enhances the body’s ability to kill certain bacteria and allows oxygen delivery to tissues. Ozone therapy helps to produces new, healthy cells in the body.  Ozone therapy may also disrupt the growth of harmful bacteria in the body. If there is some infection in the body, ozone therapy stops it from spreading it further. Dr. Pradeep Muley, Head Interventional Radiologist, Fortis Hospital, Vasant Kunj adds, “in the chamber of hyperbaric oxygen therapy, the air pressure is increased to three times higher than normal air pressure. Under this high pressure, the lungs can gather more oxygen as compared to breathing pure oxygen at normal air pressure. Then blood helps to carry this oxygen throughout the body which helps in fighting with the bacteria and stimulate the release of substances which are known as growth factors and stems cells, which directly promotes healing.”

Sometimes, cancer patients become injured from treatment. Radiation therapy, for example, can cause serious injury. It can lead to issues such as bleeding from the bladder, gut or rectum, harm to the jaw bone, teeth, and throat, non-healing wounds, tooth decay, and soft tissue damage in the chest wall and osteo radio necrosis. The introduction of HBO into the body can help heal these tissues by helping grow new blood vessels by getting more oxygen to those area(s), reducing swelling and allowing better blood flow and higher oxygen levels help white blood cells to kill bacteria and stop infection. Dr. Gautam Shah- Orthopedic Surgeon, Daivam Wellness explains, “the more oxygen our body carry in our bloodstream, the better it can fight bacteria and inflammations. With the help of hyperbaric oxygen therapy chamber, in which the supply of oxygen is increased to three times the amount than normal, the lungs gather more oxygen and pump it back into the organism. For clients suffering from cancer, this therapy helps to strengthen the cellular strength, and the overall immune system. HBOT affects cancer cells through a reduction in hypoxia, a low-oxygen condition that is common in cancerous tumors thus it has tumor-inhibitory effects in cancer cells. Combining oxygen therapy with chemotherapy can slow cancer.

When the immune system is depleted (chronic infections, cancer etc.) ozone will stimulate it. This occurs by ozone’s unique interaction with white cells to release immune messengers called cytokeins. In the absence of adequate DPG our cells become starved for oxygen. In simple terms, Ozone therapy refers to the process of administering medical grade ozone gas to cleanse the system or treat a disease. When the body is exposed to toxins for a prolonged time period, it loses its ability to eliminate it from the system properly. The accumulated toxins block the cells from absorbing oxygen, leading to a number of illnesses. Ozone therapy helps detoxify the body and is effective for patients suffering from allergies, skin conditions, obesity, digestive issues, and insomnia. “Ozone gas is excellent at inactivating microorganisms, stimulating the production of oxygen, and activating the immune system. It helps flush out the infected cells and helps your body to produce new, healthy ones. Ozone therapy is effective at reducing complications for people suffering from diabetes. Diabetic complications are usually the result of oxidative stress, and ozone therapy helps introduce fresh oxygen to the tissues. It also boosts the immune system by stimulating the production of white blood cells,” says Dr. Babina N.M, Jt. CMO, Jindal Naturecure Institute.

HBOT and ozone therapy are non/minimally invasive therapeutic modalities. Therefore, patient compliance is good. These therapies can be advised as an adjunct to mainstream treatments. For example, regenerative medicine and cell-based therapy, which is based on the principle of utilizing the innate regenerative potential of the body, recommends these modalities in order to achieve additional benefits. “You are capitalizing on the inherent healing potential of the body, through minimal external intervention,” says Dr. Mahajan. HBOT directly oxygenates the blood; therefore, results in transient hyperconcentration. Thus, the effects of HBOT, while immediate, are short-lived. Ozone therapy on the other hand gradually works by delivery of oxygen to hypoxic tissue through vasodilation and also facilitates release of growth factors over a period of time, thus showing lingering effects. Nonetheless, both forms ultimately rely on increased oxygen concentration and are beneficial in treatment of a myriad of conditions. Dr. Navita Purohit Consultant, Pain Medicine, Kokilaben Dhirubhai Ambani Hospital says, “Hyperbaric oxygen therapy is a treatment process involving 100 percent pure oxygen in a closed chamber at higher pressures than normal atmospheric pressure under observation of trained physician/ nurse. HBOT improves local tissue circulation and angiogenesis Increases superoxide and other free radicals levels causing increased tissue scavenger action, reduces local oedema. Patients of diabetic foot, infected wounds, cancer wounds have reduction in wound size, improved wound healing, reduced discharge from the wounds, better healthy granulation tissue.” The other benefits to be counted to which are beneficial to health are stimulate the immune system to speed up healing, purifying blood and the lymph, inactivating bacteria, viruses, fungi, parasites, yeast and protozoa, having anti-inflammatory properties, reducing pain, lesser stay at hospital and the like.