With the franchises allowed to retain just three players this IPL auction had a whopping 578 players under the hammer and the squads have many new names in their teams. With many international and national players all set to make their debut this year, it has been their track record in the domestic and international leagues that has helped them jump on the IPL bandwagon. As the curtains go up on the 11th edition of the cricket gala on April 7th 2018, here are some of the debutants to watch out for.

Jofra Archer, the 22-year-old West Indies pacer while has an economy of 7.27 but his strike-rate of 13.60 and regular bowling speed of 90 mph, big-hitting capabilities has been bagged by the Rajasthan Royals for a whopping ₹ 7.2 crores.

Krishnappa Gowtham the 29 year old Karnataka spinner bought by Rajasthan Royals for ₹ 6.2 crores has been bought for his all-round skills.

D’Arcy Short a batting all-rounder, left-handed opener and a slow left-arm bowler has a whopping strike rate of 150 from 19 T20 innings and has bene picked by Rajasthan Royals for ₹5.4 crores.

Evin Lewis the left handed batsman who idolizes Chris Gayle has been roped in for ₹3.8 crores by Mumbai Indians and has a current strike rate of 146 from 82 T20 innings.

Kamlesh Nagarkoti has been roped in by Kolkata Knight Riders for ₹ 3.2 crores as he regularly bowls in excess of 140kph.

Khaleel Ahmed who played the last U-19 World Cup  became the second highest wicket-taker in the domestic T20 tournament was picked by Sunrisers Hyderabad at ₹ 3 crores.

Shubman Gill, the ‘Man of the tournament’ in recently concluded ICCU-19 World Cup has been signed by Kolkata Knight Riders for ₹1.8 crores.

Moeen Ali, the all round Englishman has a varied experience with 109 T20s, scoring 2139 runs at an average of 22.51 and strike rate of 128.85 has been bought by Royal Challengers Bangalore for ₹1.7 crores.

Jason Behrendorff, the 27-year-old Australian bowler known to swing the ball in power play and pick up early wickets has been picked up by Mumbai Indians at ₹ 1.5 crores.

Lungisani Ngidi the South African who was the nemesis of the Indian batsmen in the Centurion Test with 43 wickets in 39 T20s at an average of 19.21 and strike rate of 16 has been snapped up by Chennai Super Kings of Rs 50 lakhs. 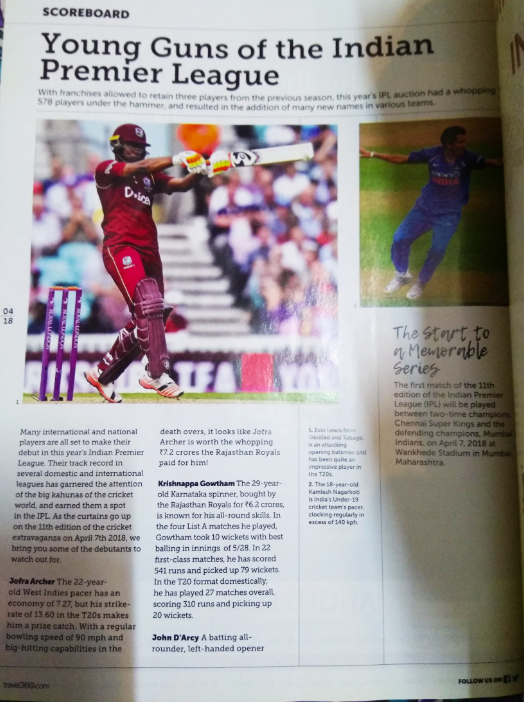 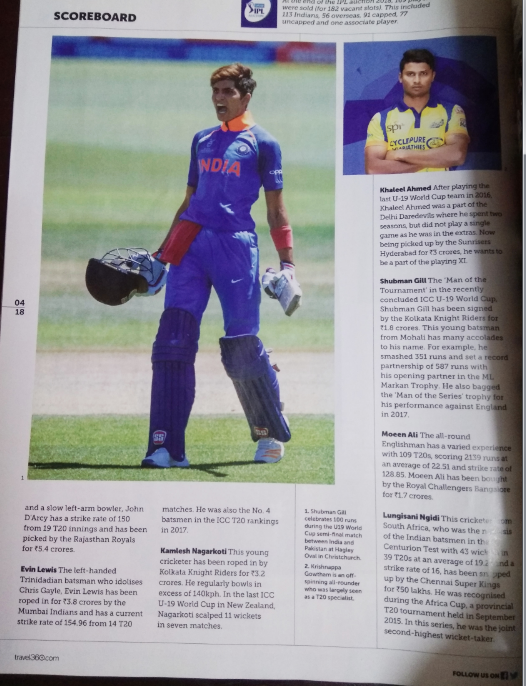