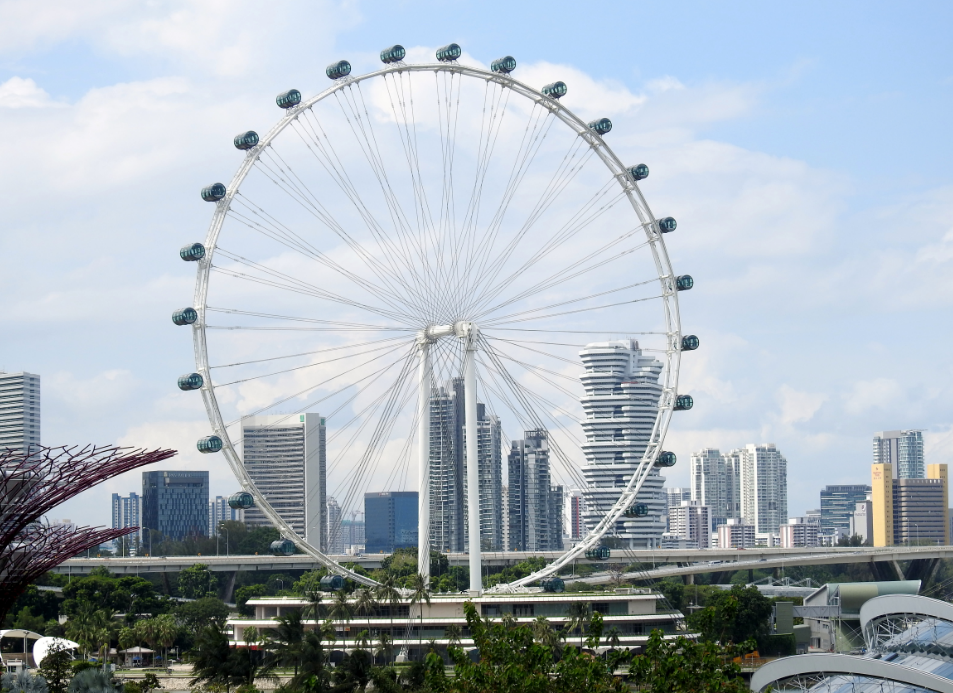 The sobriquet of Little Red Dot may be often associated with Singapore but a visit to this city and country reveals that there is nothing little here. If there was a city that could be described as perfect, Singapore could win hands down and it is no wonder that the Singaporean passport is the most powerful in the world. An aerial view from the flight is the best precursor to what Singapore has in store. The ocean blues, green cover, blobs of small brown islands, a beautiful marina and sailing ships make for a perfect sight into the city. In fact the experience continues as you land in a stunning airport. Well, the annual Skytrax World Airport Awards often called the Oscars of the aviation industry has ranked Singapore’s Changi Airport as the world’s best airport for the sixth year in a row.

What sets Singapore apart is the fact that it has a mixed ethnicity of Indians, Chinese and Malays as well as a unique Peranakan culture that has manifested from a mix of these races. This means that you are bound to see several manifestations of this whether in the buildings, architecture or the food. A good place to start exploring is to head to Little India a neighbourhood that for a moment will have you thinking if you are back in India. Only this one is spic and span and has a medley of flavours, fragrances and bustling markets. Home to the iconic Mustafa Centre, Little India has much to offer including the beautiful Sri Veeramakaliamman Temple, The Temple Of Thousand Lights, a Buddhist temple as well as the Indian Heritage Centre which has several galleries that showcase the historical links between India and Southeast Asia. Likewise the bustling Chinatown, a Chinese quarter in Singapore is a motley mix of markets, temples and souvenir stores and a visit to the beautiful Tang-styled Chinese Buddha Tooth Relic Temple and Museum is a must. In fact at this Buddhist temple, you can even get free books on Buddhism! The adjoining Ann Siang Hill area here is the place to head to for an evening of al fresco dining and cocktails. Another colourful locality that must be explored is the Arab Quarters that merges the old and new and is best explored on foot. There are several colourful heritage buildings here and the architecture of the Sultan Mosque is eye catching. Stores selling traditional ware are all over so you can feel like you are in the Middle East. Head to Haji Lane and be amazed by the burst of colours courtesy the vibrant street art while you shop at some charming boutiques and tuck into delectable food at cafes as well.

With 63 islands in the country, you have the water as a constant and Singapore has developed into a wonderful cruising destination as well. With a world class marina, this is where you can sail on some of the best ships in the world that dock here. A symbol that is associated with Singapore is the Merlion is a mythical creature with a lion’s head and a fish’s tail which also gives it the name lion city is located at the waterfront Merlion Park. In fact this area is best visited towards evening where you can walk all around the deck and soak in the sights and sounds of this ultra-modern city. Again when you are here do head to the Marina Sand Bay a huge building with three towers connected by the cantilevered Sands SkyPark. The observation deck is on level 57 levels and offers stunning views of the entire city and can be accessed by purchasing a ticket. Seeing the entire city of Singapore from the top is certainly an experience that you must not miss.

Singapore is a city that takes pride in its tag of ‘City in a Garden’ and more than half of the island is covered with greenery. The Singapore Botanic Gardens in fact is a UNESCO World Heritage Site! I strongly recommend that you make the time to see Gardens by the Bay, a futuristic botanical garden home to many varieties of orchids and flowers. This is where there are 12 sprouting ‘Supertrees’ which are steel framed concrete structures that are anywhere between 25 and 50 metres and are covered with plants that grow vertically and will eventually cover the entire structure. Some of these have photovoltaic cells to harvest solar energy which is used to light them up in the night and also air exhaust receptacles. A skyway that connects two of the Supertrees offers splendid views of the gardens. The Flower Dome here is largest glass greenhouse and has an eternal spring like climate. Home to Baobabs and Bottle Trees, Australian Garden, Californian Garden, South African Garden, Succulent Garden, South American Garden, Mediterranean Garden and Olive Grove, this is a garden space like no other. The Cloud Forest, a 35-metre high mountain covered with vegetation with the world’s tallest indoor waterfall will also give you a lesson or two in conservation and ecology. If you love birds, the 20 hectare Jurong Bird Park home to over 400 species that has one of the largest walk in aviaries in the world is a must see. The 26-hectare Singapore Zoo that has 300 species of mammals, birds and reptiles in a habitat that is natural is a hit with families too.

A visit to Sentosa Island that has the famed Universal Studios and high tech rides, shows and attractions is a fun way to see the vibrant city. This is where you can live your childhood fantasies and there are several rides and attractions like Puss In Boots’ Giant Journey, Jurassic Park Rapids Adventure™, Sesame Street Spaghetti Space Chase Battlestar Galactica: Human Vs. Cylon™, Transformers The Ride: The Ultimate 3D Battle and more. Each of the seven zones has several roller coasters rides and movie-themed attractions and the place is dotted with cafes and restaurants so you will never really be hungry here. The Trick Eye Museum here is an enticing place as the 3D art work here uses optical illusions to create some wonderful photographic memories. Also check out the S.E.A. Aquarium home to over 800 plus species of marine wildlife across 49 habitats. You will be amazed to see that the marine world has so much colour and character as well as the sheer number of species itself is quite mind boggling.

If you are a foodie, Singapore will thrill you. Whether it is Michelin starred restaurants, quaint cafes or road side hawker stalls there are a plethora of options here. If you are looking for something authentic the Long Beach restaurant at Dempsey makes the famed Black Pepper Crab, apart from delectable fresh sea food delicacies. For traditional desserts, head to the many bakeries and sweet stores at Tiong Bahru and the Pandan chiffon cake is a must try, Likewise Chatterbox restaurant at Mandarin Orchard Singapore makes the legendary Mandarin Chicken Rice and it is said the taste remains the same since 1971 thanks to a closely guarded family recipe. Vegetarians can rejoice at Whole Earth Singapore’s first Peranakan-Thai vegetarian restaurant that makes delectable vegetarian fare using only pant-based ingredients. Singapore also has several hawker streets where freshly-grilled satay is sold off the stoves. If you want to party, the night life at Clark Quay one of the city-state’s busiest riverside quays dotted with nightclubs, bars and pubs is a must. Or 1 Altitude the highest alfresco bar in the world at a height of 282 meters is the place to sip on cocktails and soak in the views of the maximum city. In all if you are looking for a holiday that offers something for everyone in the family head to Singapore, it has many surprises up its sleeve that are waiting to be discovered.

Stay: Singapore has myriad options across budgets and The Mandarin Orchard is a great choice. They even have a free phone that you can use during your stay in the city!

Local transport: Singapore has a good public transport system and the Mass Rapid Transit (MRT) is one of the best ways to navigate the city.

Best time to visit: The months of January to March have relatively pleasant weather wise compared to the other months.

This story appeared in Smartlife Magazine’s May 2018 issue here: 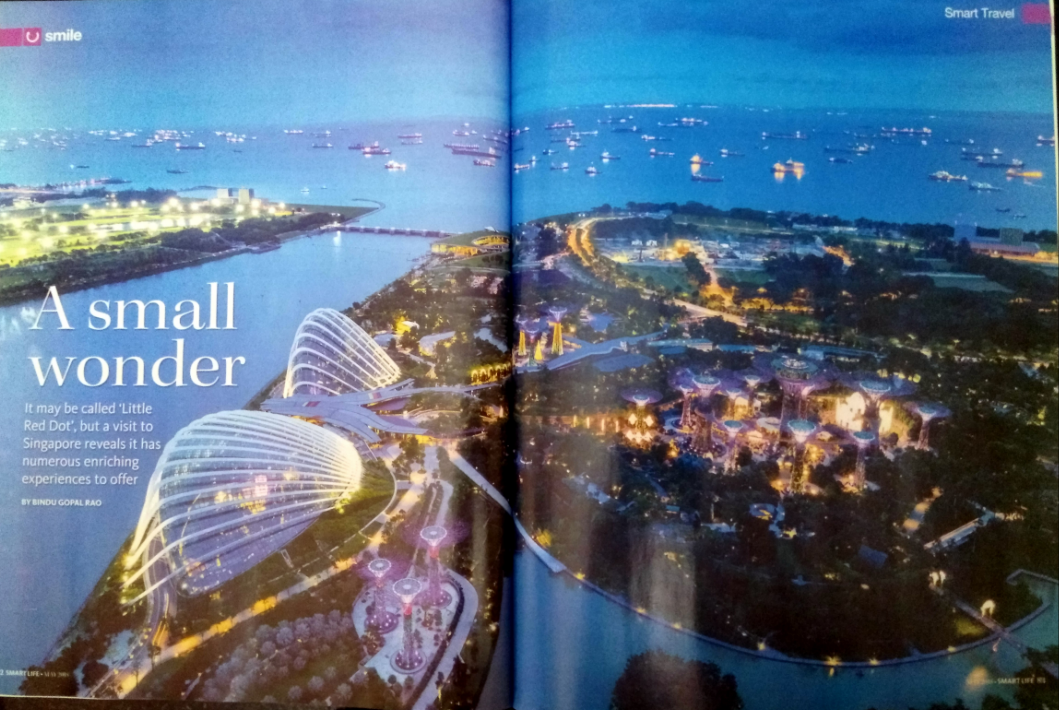 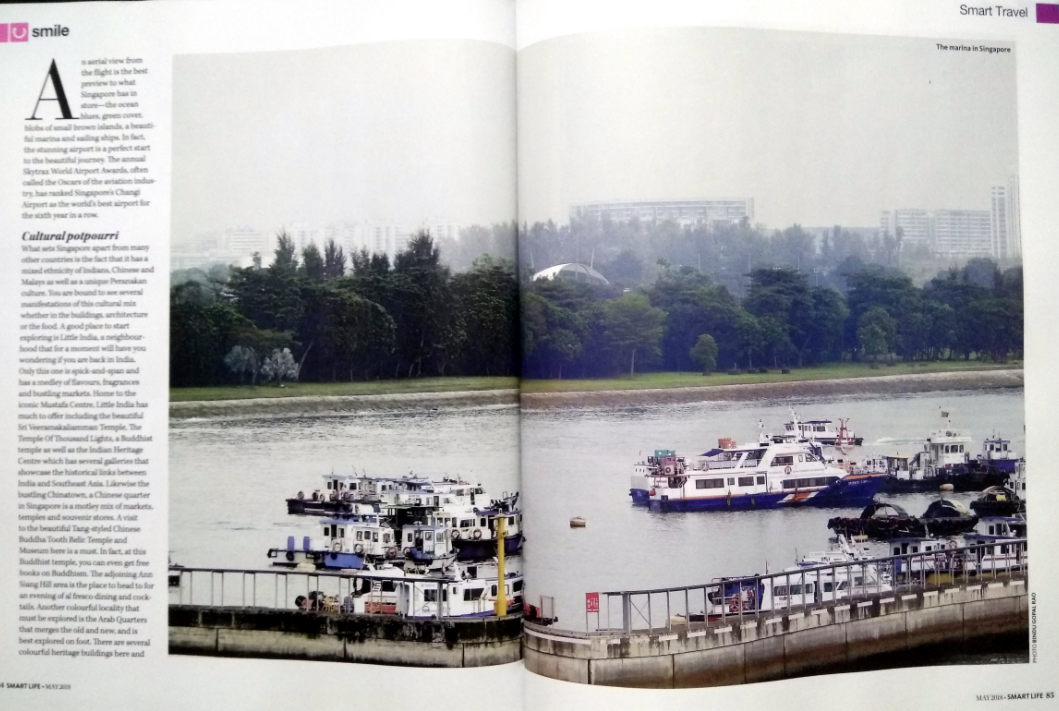 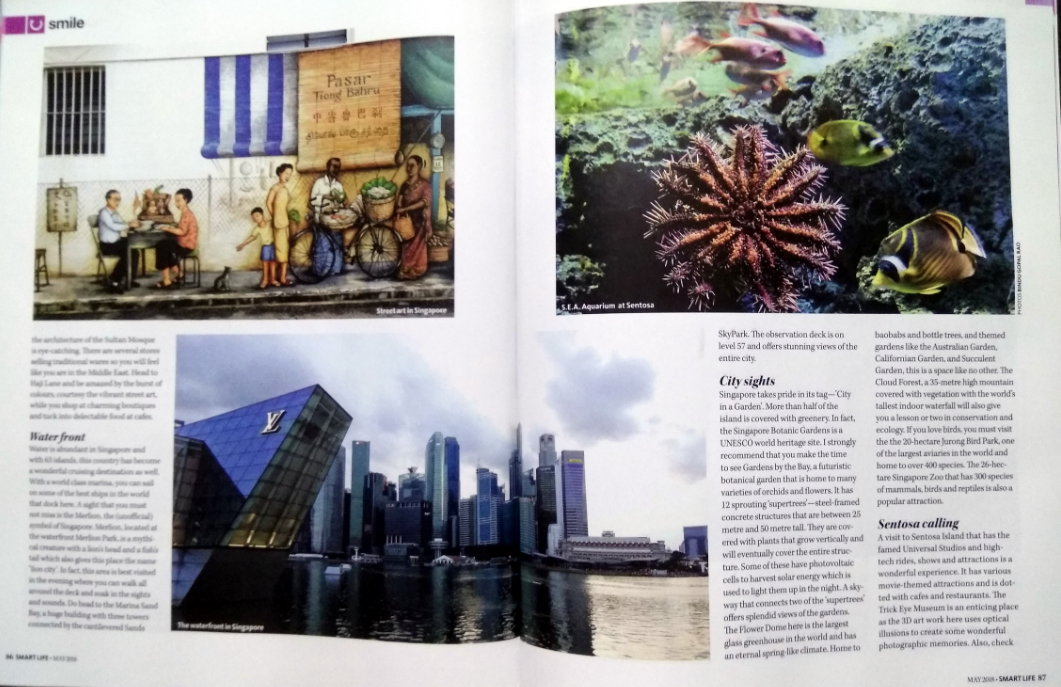 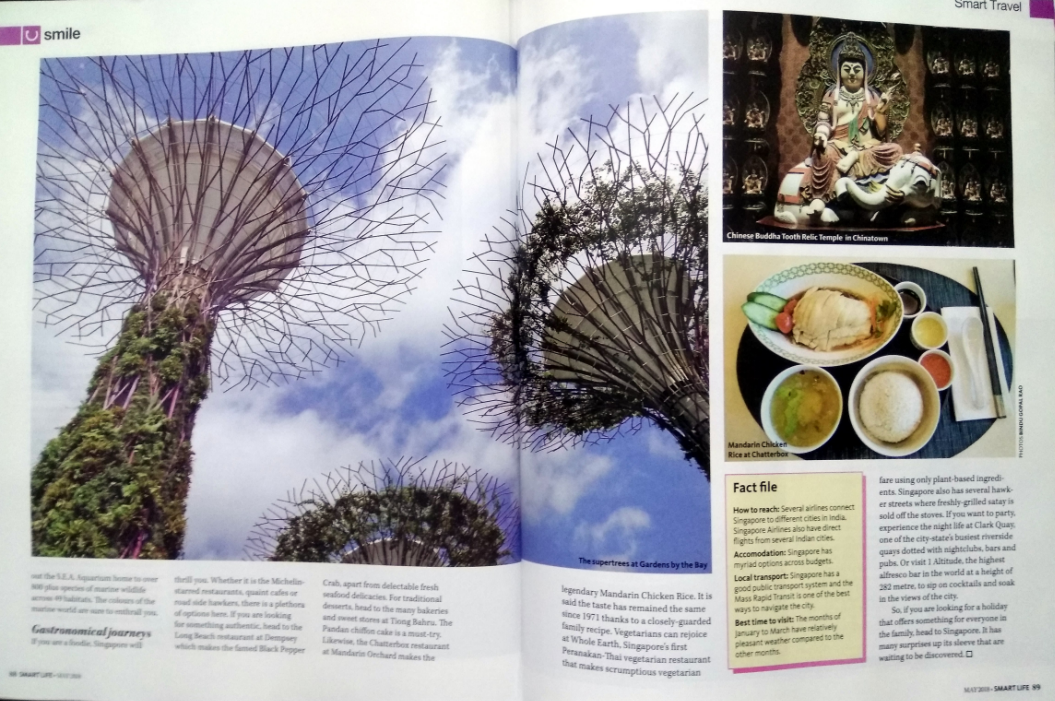