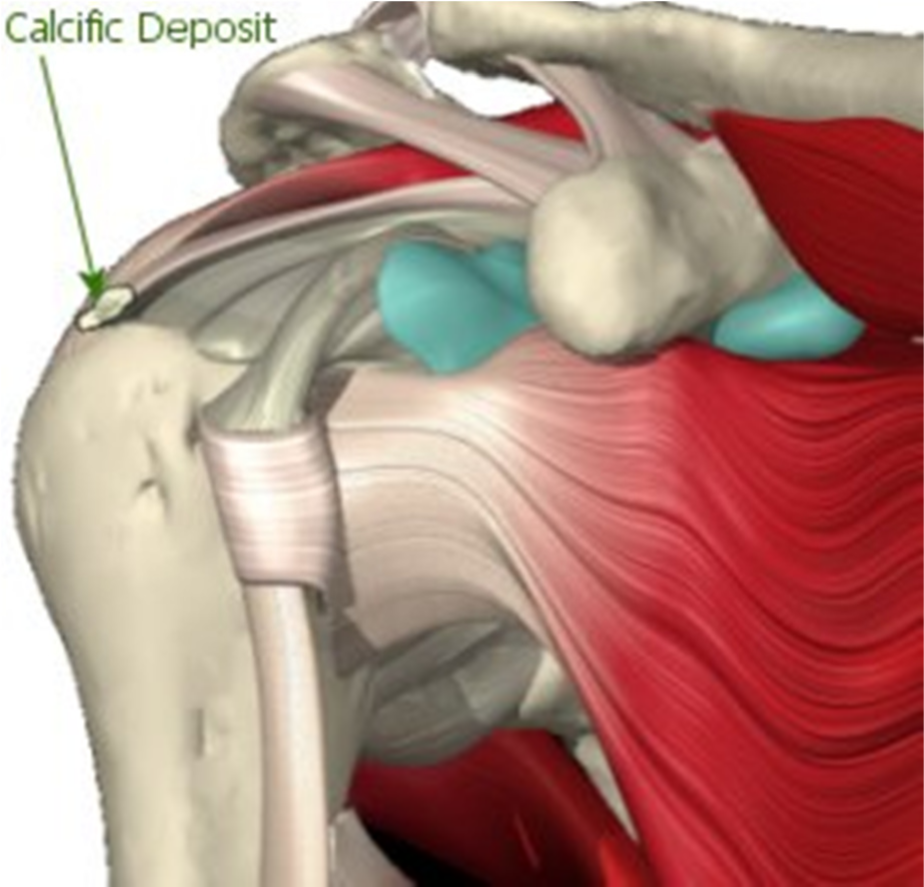 The painful condition of muscle calcification is very common and needs immediate care, but very few people are aware of it

Every Saturday morning, Bengaluru-based software professional Ashoka typically starts his day with a walk. This Saturday however was a little different as he woke up with a dull ache in his shoulder which he dismissed from his mind assuming it was because of an incorrect sleeping posture. He went for his walk and on coming back, he noticed that the pain showed a sustained increase to the point that he could not even lift his hands up. Concerned he met his orthopaedic Dr Rupendu T., at his Trauma and Joint Clinic who immediately suspected that he had a muscle calcification (confirmed by an ultrasound soon after). “I have patients coming to me commonly with excruciating pain, many who actually hold up one hand with the other as the pain prevents them from leaving it loose,” says Rupendu. The problem of muscle calcification is quite common but somehow most people are unaware of it. 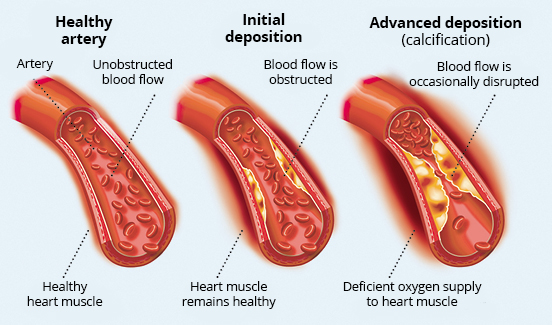 Simply stated, muscle calcification is the deposit of calcium in the muscle, which is usually free flowing in the blood. It may also occur as a result of injury to the muscle forming a haematoma followed by calcification of tissue if untreated. Myositis ossificans is a condition when calcium deposits form in a previously injured muscle. Myositis means muscle inflammation. It can occur in the muscles of the thighs, upper arm (triceps) and other muscles. There is usually a blow to the muscle that causes a hematoma (a deep bruise with bleeding). Dr Anshu Swadesh Sachdev, Specialty – Orthopaedics, Apollo Clinic Kharadi, Pune explains, “Muscle calcification is a term which refers to Myositis Ossificans or formation of bone tissue in soft tissues/muscles rather than the bone (Ectopic new bone formation). It usually happens in large muscles of arms and legs of young people and athletes after traumatic injuries.” Ossifying lesion can occur in any form of soft tissue – this includes structures such as fat, tendons and even nerves, although it is most commonly found in muscles.

Dr Umesh Shetty, senior orthopaedic surgeon, Axis Hospital, Andheri (West), Mumbai lists out the symptoms of the condition. “Evident symptoms of muscle calcification are hard swelling which may be usually painless or may be painful if pressing on a nerve, decreased range of motion of the joint brittle bones, recurrent fractures of bones – become weak, brittle and painful associated with vascular calcification, hardening of the arteries forces the heart to work harder, itchy skin, redness of eyes. Also, symptoms of hypocalcaemia are visible like loss of appetite, nausea and vomiting, constipation and abdominal pain, increased thirst and frequent urination, fatigue, weakness, muscle pain, confusion, disorientation, and difficulty thinking.”

Take the case of 30-year-old Abhishek, an engineer based in Bengaluru who presented himself at Sita Bhateja Specality Hospital with injury to the right thigh. After the injury he had developed swelling and hematoma over the thigh. An X-ray was done and no fracture was seen. He was treated conservatively with RICE therapy: Rest, Ice, Compression and Elevation and anti-inflammatory medication. He was advised to take rest for two to three weeks, but he started playing after one week and again injured his right thigh, which was treated as above. After six weeks he presented with swelling, hard lump and persistent pain over the right thigh. X-ray showed calcification in the quadriceps muscle. He was treated with physiotherapy, ultrasound therapy and a range of motion exercises and strengthening exercises. At the end of three months his pain reduced and his range of motion improved. After six months, his X-ray showed resorption of calcification and he resumed sports thereafter. 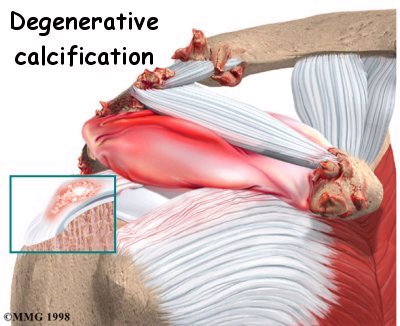 Mainly injury to a muscle while doing a sport activity, fall resulting trauma, untreated chronic haematomas, calcium metabolism disorders that cause hypercalcemia , genetic or autoimmune disorders affecting the skeletal system and connective tissues, persistent inflammation are causes of muscle calcification. “Causes can be split into two sub groups – Myositis ossificans progressiva (MOP) and Myositis ossificans traumatica (MOT). MOP is caused by genetic factors inherited in an autosomal dominant manner, where progressively all the muscles in the body undergo ossification. With progression of the disease fatal outcomes are also often seen. But it is a relatively rare condition with about a 1000 cases reported in literature,” says Dr Harish Puranik, consultant orthopaedic surgeon (Arthroscopy & Sports Medicine), SPARSH Hospital. These cells eventually become hard and feel like a lump in muscles. This can happen to any individual but is most commonly seen in athletes and those who exercise a lot. Dr Sachin Bhat, orthopaedic surgeon, SRV Hospital, Goregaon adds, “Ossificans or Heterotrophic ossificans as it is also known can be caused as a result of injury or as a rare congenital manifestation. After muscle injury there are cytokines which are released out in the tissue which stimulate blood cells to form bony tissue in muscles; this is a result of inappropriate response from stem cells in the tissue.”

If muscle calcification is in the early stage then physiotherapy (which includes exercise), ice and nonsteroidal anti-inflammatory drugs (NSAIDS) is the treatment. “If calcification is more profound surgery for the removal of calcium deposit can be done, either open or arthroscopic,” opines Dr Himanshu Bendrey, orthopaedic consultant, Zen Multi Speciality Hospital, Chembur, Mumbai. Dr Prakash Doshi, director traumatology and orthopaedics, Nanavati Super Specialty Hospital says, “One should consult the doctor if there is pain, reduced mobility and inflammation that is not subsiding after normal norms of treatment.”

Joint movement and gentle muscular exercises are encouraged to prevent muscle wasting and weakness. This is usually self-limiting and is treated conservatively with ultrasound therapy, range of motion exercises, strengthening exercises and extracorporeal shock wave therapy. “Surgical excision is reserved for those who failed the non-surgical treatment, those with intolerable pain, compression of the neurovascular structures, or limitation of the range of motion of the joint which affects the activities of daily living. Surgery is only performed after six to 18 months following injury because surgery does not alter the bone maturation process,” adds Dr Vinay R, consultant orthopaedic surgeon, Sita Bhateja Specality Hospital, Bengaluru. Treatment in this case aims at reducing pain. “To get relief from pain, one can take NSAIDs like ibuprofen and naproxen. This can be followed by physiotherapy to increase muscle strength and power. The range of motion would also increase when physical therapy is done regularly. In a few severe cases, surgical removal of the deposition is done to achieve pain relief and then physiotherapy is continued for the muscle to regain its functionality,” says Dr Dhrity Vats, orthopaedic, Healthians, a home diagnostic service. 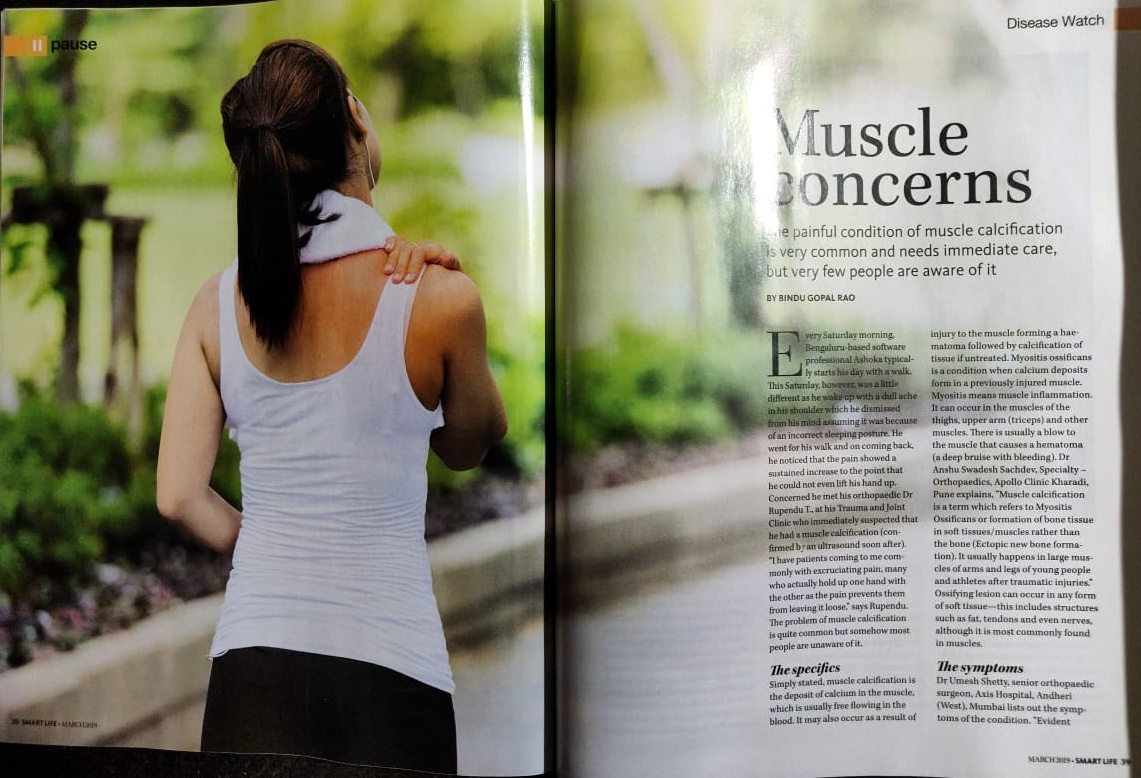 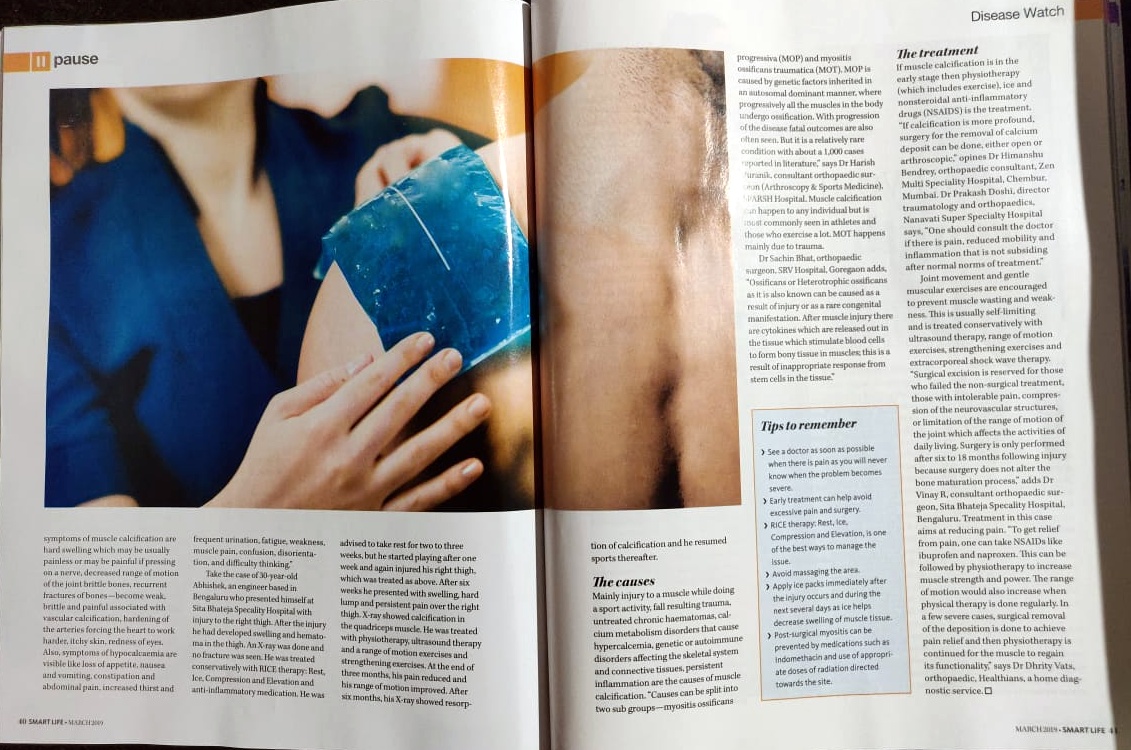