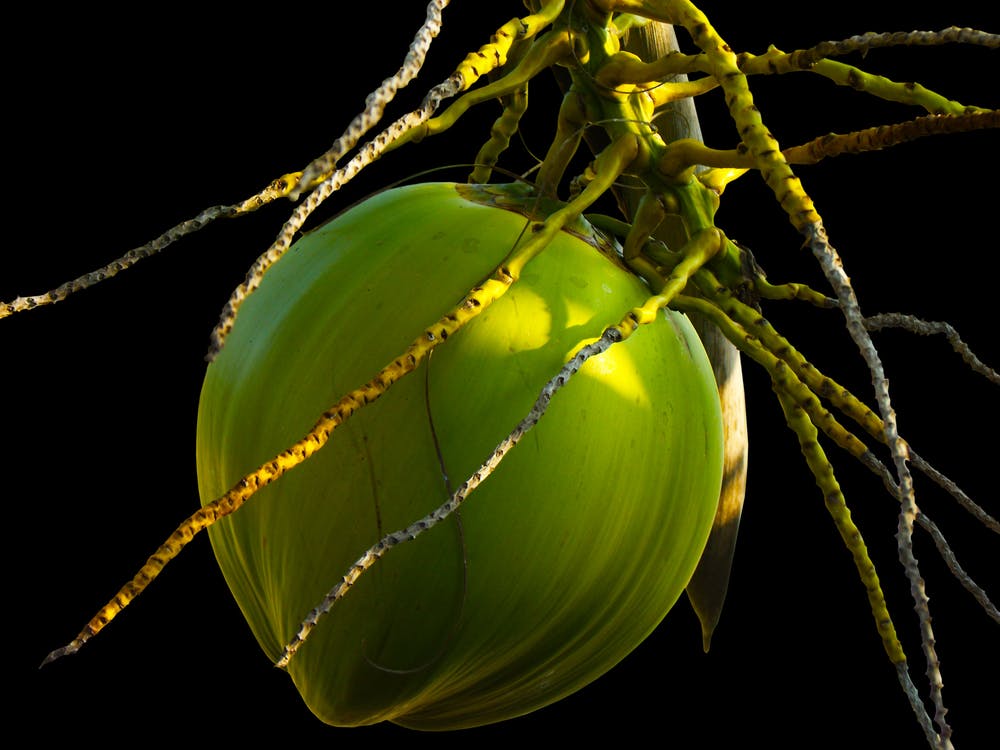 Come summer and thirst pangs are unmissable. However if you look back into your childhood, you will remember your mom or grand mom asking you to drink something traditional to prevent dehydration. Incidentally each part of India has its own drink that helps you beat the season’s blues and each of these drinks will help you beat the summer blues the right way. Incidentally, it is quite easy to make most them yourself too. So sit back, chill and raise a toast.

Tender coconut water is among the best summer drinks from Kerala and the other coastal parts of the country. In fact it is a staple drink and is one of the most famous drinks in South India and available at all times across South India and is a as coolant in summer season. Having a low level of fat, carbohydrate and calories the best part is that you simply drink this as is. Also this is ideal in summer as it helps the body stay hydrated which is vital. Shrinidhi Hande, a Chennai based blogger, eNidhi India and self-confessed coconut water fan says he has been having the drink as a child. “In fact when I found out it was slightly more expensive near home, I would walk a kilometer away to buy them. I have lost 7kgs over the last year as I drink one every day and this is completely natural with no scope for contamination.”

Kokum juice is very popular in the Konkan region, Goa, Karnataka and North Malabar. It has a cooling effect on the body and not only quenches your thirst, but also helps to prevents dehydration and sunstroke while improving digestion and appetite. It is a very rich source of minerals like potassium, magnesium and manganese. Kokum is available off the shelf and can be spiced with additions to make it tastier. “Kokum sharbat is traditionally made in Maharashtra again sweetened with jaggery. In Goa you also have Kokum Saar and Sol Kadi made with coconut milk and kokum. Both of these are Hindu Goan preparations,” says culinary expert Karen Anand.

A finger millet (ragi) powder based drink from Karnataka this is both nutritious and easy to digest. Ragi is rich in calcium, iron and fiber. It also contains phytochemicals, which aids in slowing down the digestion process. Ragi has in fact known to be the farmer’s food as it is not just full of protein but also easy on the pocket. Locally grown this is a nutritious crop and this drink is ideal to beat the summer heat. Adding buttermilk to Ambali increases it nutritional value and tastes good too. Chef Dhaval Ajmera, Executive Chef, WelcomHotel Bengaluru says, “mix ghee, water and ragi in a pan and cook on medium heat for 15 minutes/ till ragi is cooked completely. Let it cool and add buttermilk, chopped chilies, chopped onion and chopped coriander. Serve chilled.”

Variyali Sharbat or Saunf ka sharbat is made out of grounded fennel, sugar and water also known as variyali in Gujarati and saunf in Hindi. The drink is simple and is made by boiling the ingredients together, allowing it to cool and then straining and drinking the same. This drink is consumed in many states including Gujarat, Rajasthan, and Madhya Pradesh and UP. “A summer drink this is known to mitigate the effect of heat and provide protection from heat stroke and fennel has cooling properties. It has a lovely flavour and is a digestive and I can make a squash using mint and lemon or even make a gola or slushy which works better with kids,” says author and food consultant Rushina Munshaw-Ghildiyal.

Also known as Wood Apple sherbet, this fruit is very popular to the Bihar, UP and Bengal region and found in the summers only. The pulp is taken out from the hard shell with has gum and seeds as well. The pulp is mixed with water and sugar (if required) and served chilled. This is an effective drink that acts as a coolant in the hot summer months. Archana Doshi who blogs at Archana’s Kitchen says, “I came across after I got married and my mother in law made it for me. In fact in Bangalore we do not get very good ones as they are quite small and hard here, so she actually gets them for Kolkata for us in the summer. This is a wonderful and very refreshing drink and has a unique taste unlike other fruits. I prefer to add a dash of lemon and some black salt to make it palatable and it tastes a lot like marmalade.” 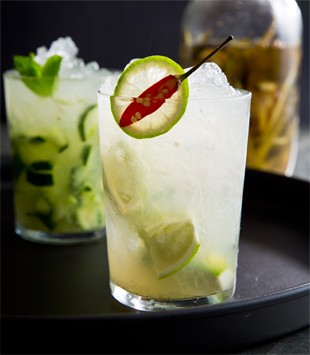 Aam Panna is an extracted juice of pulpy mangoes. They are best consumed when sweltering sun is making one sweat with heat and takes care of your mood too. A sip of Aam Panna refreshes the body and soothes the mind with its subtle taste. Most people like to call it a liquid version of their favorite, fruity mango and it is popular in Punjab and other parts of North India. “Rinse the raw mangoes in water and steam the raw mangoes in the pressure cooker for 3-4 whistles till they become completely soft and pulpy. Remove the peel and take out the mango pulp. Mix the cardamom powder, salt and jiggery to the mango pulp and blend to make it smooth. Take one spoon and mix with a glass of water. Stir and add ice cubes and serve cold,” says Shyamli Mehta, Executive Chef, Cafe Hawkers.

This is a famous herbal drink from Kerala with medicinal properties coming from a root. Gita Ramesh, Joint Managing Director, Kairali Ayurvedic Group says, “Nannari is soft and has diuretic and cooling properties. It has a light aroma and is sweet in taste and is available across South India across the coastal and Western Ghats. This is essentially a herb and the solution is made from essences extracted from the root, Boil the nannari root with four parts water. Soak overnight and store the syrup in a cool place. It can be served with jaggery or lemon juice.”

A lost recipe of primitive Bengal, made of jaggery and bud green chilies this is perfumed with Kafir lime and Himalayan salt. This is a recipe from the primitive Bengal farmer’s house and is a grandmother’s recipe that the farmers were offered to drink after they returned from sunny fields to get hydrated. “This is because the ingredients used in this drink have their own nutritive value. Kaffir lime always provides refreshment, jaggery keeps the stomach cool during summers and the bud chili keeps the digestive system and metabolism active,” says Sammya Majumder, Executive Chef, Raichak on Ganges. You can mix all the ingredients in an earthen pot and allow the flavours to mature overnight before you consume it. In a glass of water, add 50 grams of jaggery and 2 tablespoons of Kaffir Lime Juice, paste of bud chilli and blend the mixture and drink it.

Jigarthanda is a cold beverage that originated in the South Indian city of Madurai in Tamil Nadu. It is generally prepared and served at roadside stalls as refreshment during the Indian summer. It translates to ‘cool heart’ in English. In fact there are road side stalls in Madurai (like Murugan Jigarthanda) that have boards extolling its virtues saying this is a “drink that cools the liver.” Chef Suresh Babu, Executive Chef at Clarks Exotica Convention resort and spa says, “Soak badam pisin in 1 1/4 cups of water overnight. Next day, it will swell and form a transparent jelly like consistency. Remove any impurities if any. Bring full fat milk to a boil and reduce to almost half its original quantity. You will have 2 1/4 cups of reduced milk. Turn off flame; add 3 tablespoons of sugar and mix till dissolved. Bring to room temperature and chill in fridge till use. To assemble the drink, take a tall glass and add a generous tablespoon of the badam pisin in followed by a drizzle a generous tablespoons of nannari syrup. Pour the sweetened milk till three fourth full and top with a scoop of ice cream.”

Shikanji is a refreshing North Indian summer beverage made using water, lemon juice, black salt, sugar, cumin, white pepper powder and mint. Shikanji masala with different brand names is available in the market, used mainly by local street vendors. Shikanji is primarily nimbu ka sharbat. It is consumed all over North India especially Rajasthan, Delhi, Punjab and Uttar Pradesh. Priya Shiva who blogs at Priya Kitchenette says she grew up in Delhi and the summer was all about Shikanji. “In the summer vacations we would make shikanji in large quantities and have lemonade parties with our friends. Lemon has vitamin C and keeps the body cool and hydrated and with our body being 60% percent water this helps keep the body temperature regulated and helps build immunity.”

Lassi is a yoghurt based Indian drink originally from the lands of Delhi, Punjab and Pakistan. “Traditionally when yoghurt is blended with water and light sweetener it is considered as lassi. However there are many new flavors introduced in this drink to give an amazing twist to the traditional yoghurt based drink with the aid of additives like fruits, spices, jaggery or syrups. Buttermilk is a different variant of yoghurt and is also called ‘Chaas’ or ‘Chaach’. It is famous in Rajasthan and Gujarat and Southern states. It is formed after removing butterfat and has thinner consistency than yoghurt-based lassi,” avers Varun Movva, Executive Chef, Novotel Hyderabad Airport.

This is a protein rich drink from Bihar that can be used both as a sweet and savoury drink. This is made using roasted chick pea or black chana which is sattu the key ingredient. Ghildiyal adds, “this is one of the best drinks for summer that even helps diabetic patients as the savoury version can be made with buttermilk and chilies. The sweet version has a sugar syrup with the sattu and tastes great too.” 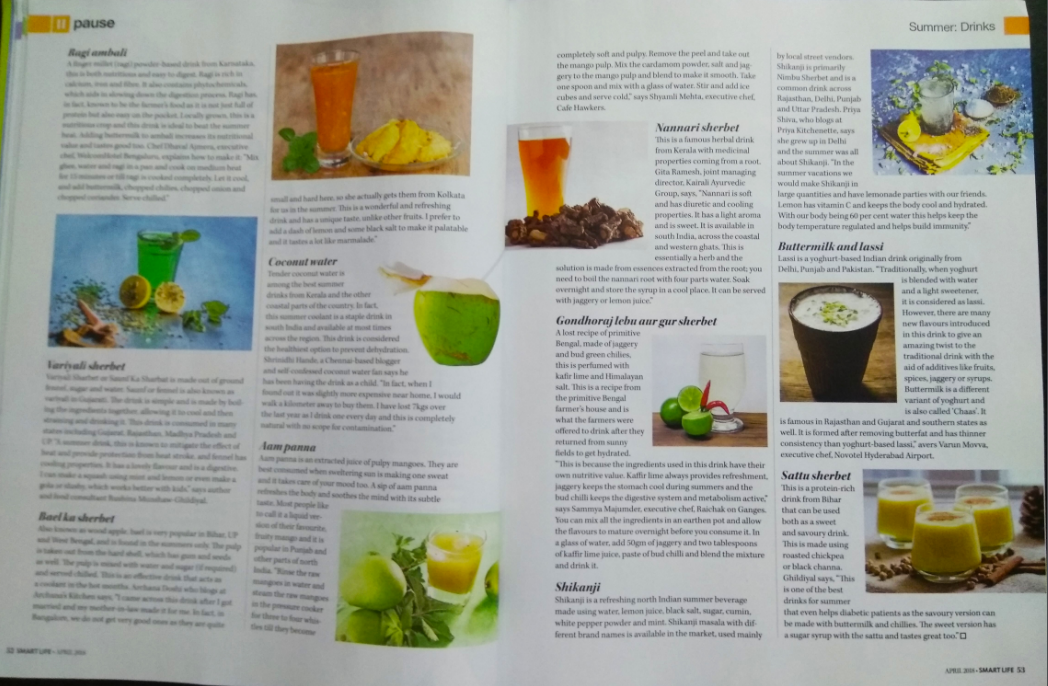