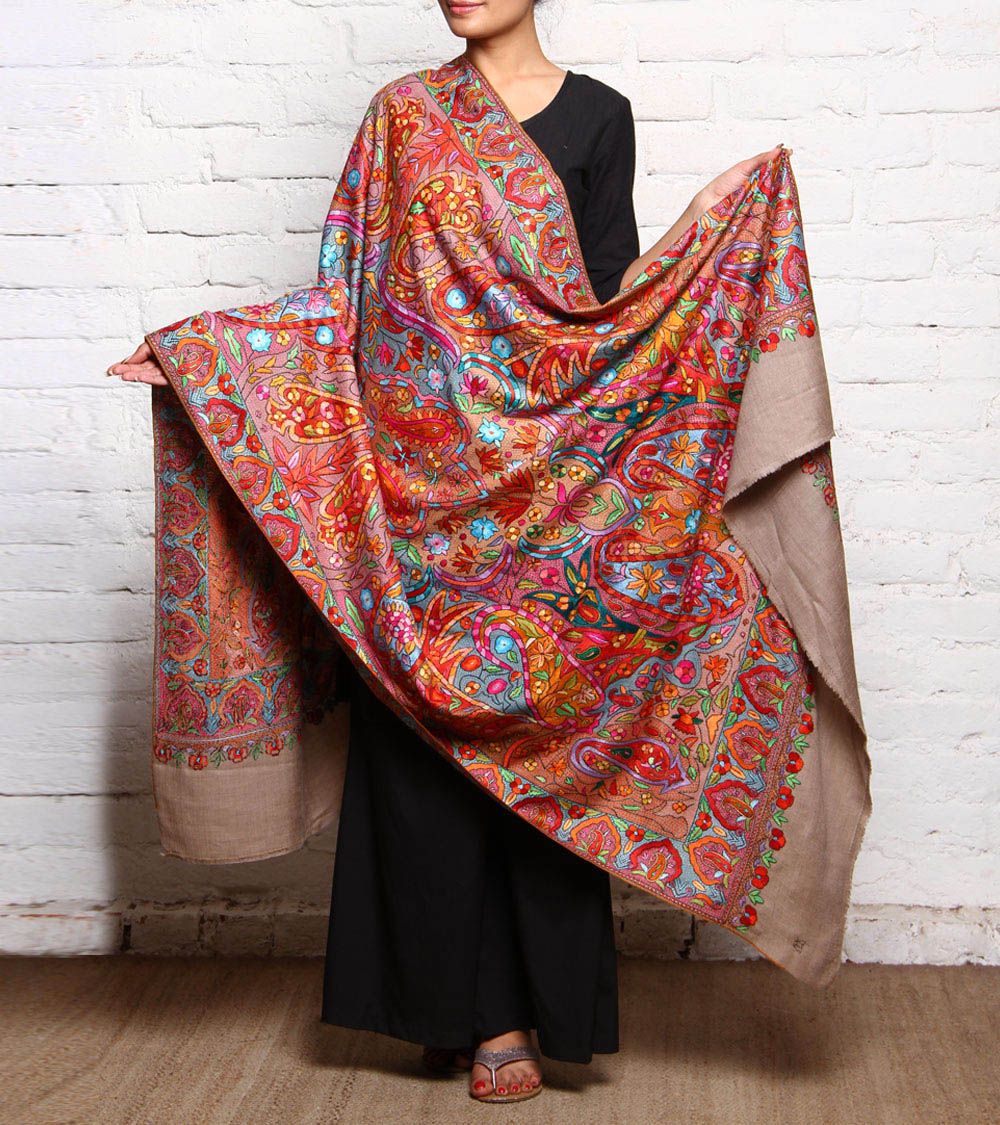 One of the prettiest states in India, Jammu Kashmir is home to the timeless art of Pashmina, one of the most loved souvenirs from India.

In India the production of Pashmina takes place mainly in Kashmir Valley. Two pashmina producing goat breeds Changthangi and Chengu are found in India. The Changthangi breed is domesticated in Ladakh region of Jammu and Kashmir and Chengu in Lahul, Spitti, Kinnaur region of Himachal Pradesh and Uttarkashi, Chamoli and Pithorgarh region of Uttarakhand. 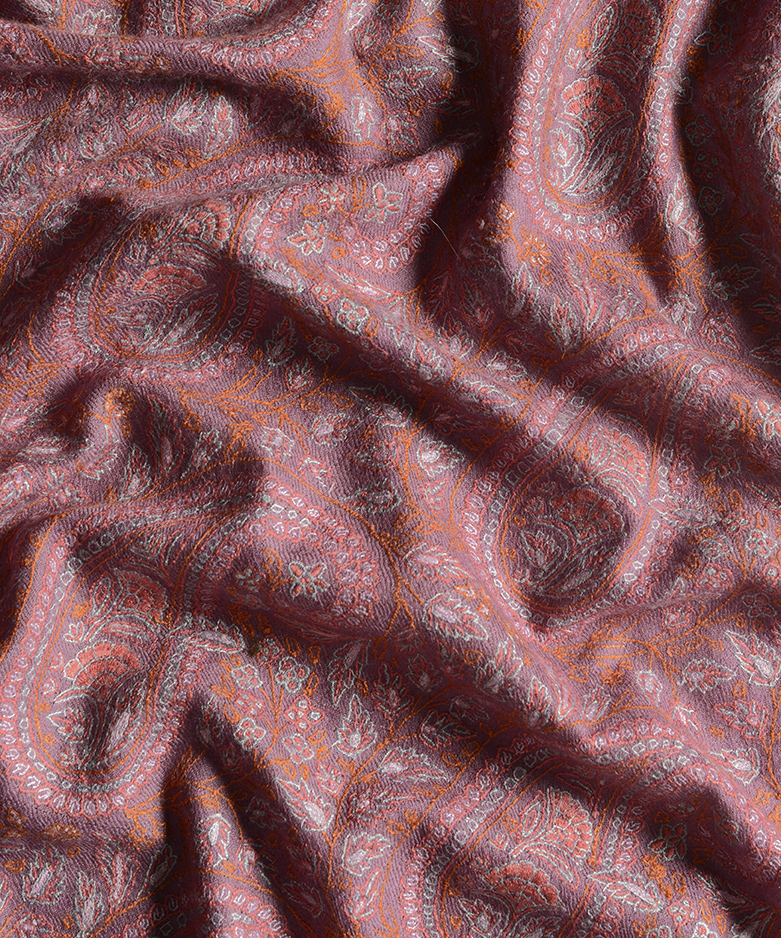 The word Pashmina is derived from the Persian word ‘Pashm’ meaning soft. It is soft to touch and light to drape and takes about 6 months to one year to complete one pashmina shawl. Normally one handmade Pashmina scarf could take up to 180 man hours to complete. Hence, Pashmina exemplifies luxury and is worn by the men and women across the globe. “A real Pashmina wrap can be crafted in two primary variants the hand spun and hand woven and the machine spun and hand woven. The machine spun variant was introduced to be easy on people’s pockets because the threads are spun on a machine, thereby reducing the human effort,” says Saroj Jalan, Founder Saroj Jalan. The art of weaving pashmina is an elaborate yet tedious process which requires skill and patience. The wool utilized for weaving the pashmina from scraps to strings is derived from a special breed of Kashmiri goat found in the high ranges of the Himalayas known as ‘Capra Hircus’  which produces the highest quality fiber. It is considered be the emerald among other fibers, as the fibers range between 12-15 microns. “The harvested pashms are washed and combed. In the later steps a handloom is set up along with a coded pattern which can only be read by the weaver and his family is aligned and the procedure begins. The shawl has to components the foundation thread and the pattern used to create the design both merge and form patterns and add a scenery of lustrous colors from one end to another, this occurs due to the Kani sticks arranged in a synchronized manner as per the design of the shawl. Each stick is inserted one at a time and when the pattern changes a new one is added each time, both the sticks need to be interlocked and assembled in order to continue the pattern. The more extensive the design the more kani sticks are aligned thus is takes up to 2 years or more to weave a detailed pashmina shawl,” says Saddam Zaroo, Managing Director, Khazir Sons. The entire production takes place in areas/villages around Srinagar.  Production of shawls is done in villages in different districts 20 – 30 kms from Srinagar like Ganderbal, Budgam, Veeru Budgam, Bhatpura and Chatragul. 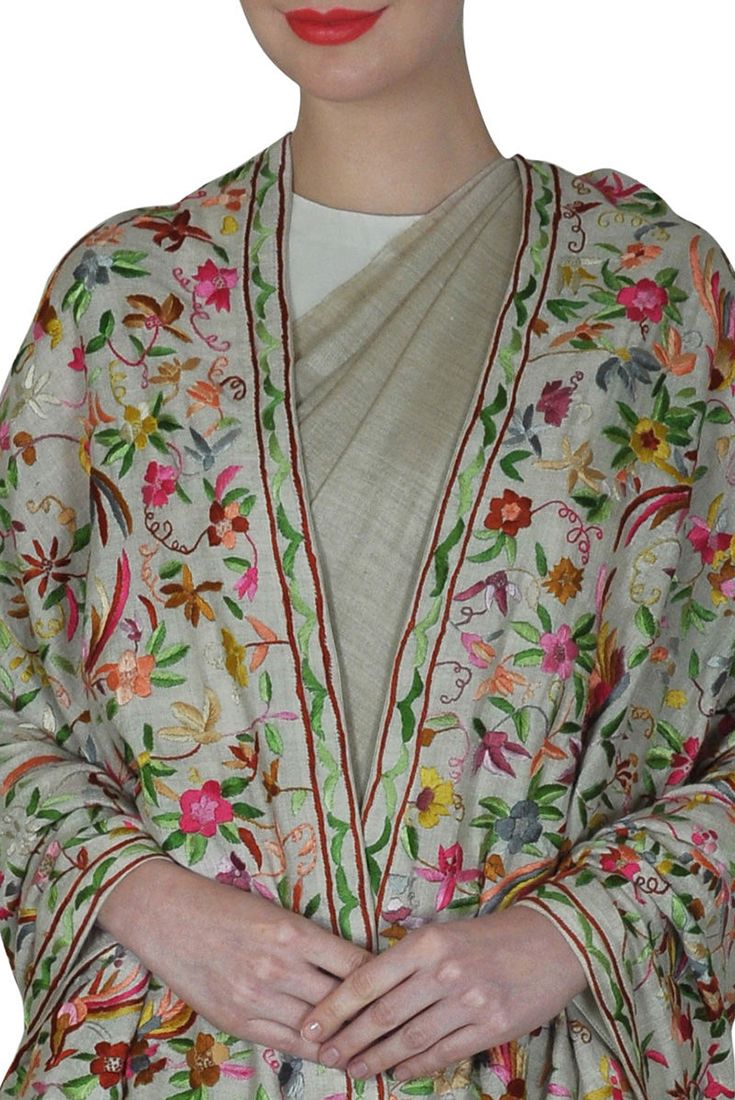 Pashmina nowadays is predominantly being used to create specialized sarees which are extremely soft to touch and has a great fall. In terms of western outfits, Pashmina can be teamed with a jacket or a blazer to give a sophisticated and elegant look. “The pashmina shawl can be turned into a shrug by utilizing an elastic band by placing the shawl on your shoulders , hold the tow long ends at the back together and pull it through with the help of an elastic band and adjust it so it sits underneath the back of the shawl,” says Zaroo. Accessorizing with scarves is ideal if you are going for a bohemian look. Pashminas with intricate embroideries is also in trend, especially for the upcoming winter wedding season.

To safeguard the art, the Government of India through its Ministry of Textiles has launched a major programme for the development of Pashmina and Pashmina developers in the Ladakh Region. This Plan envisages a new Pashmina wool development scheme with a special package and financial allocation of 41.21 crores. Special exhibitions are also being organised that provide platform to the Pashmina craft persons to generate awareness about the textile as they interact with the customers as well as help them to sell their merchandise. The process of Hand weaving Pashmina’s is a slow and tedious process which does not cater to a mass production of these shawls. “In spite of many protests, there are mills mushrooming in Kashmir itself to make these shawls on power loom for exports and mass production. This threatens the existence to the present weavers and makes them very insecure about their future in this trade, giving them a reason to look for other options to earn their livings. The Handicraft & Handloom Industry of Kashmir provides employment to about 4 Lakh people in Kashmir, this is one of the oldest cottage industry of the state known to generate handsome revenues for the state by ways of exports and sales within the country. This industry only thrives in the state of Jammu & Kashmir, as it only these craftsmen and artisans from Kashmir who have the expertise to create these pieces of Art. A number of training centers to educate and teach the local people the craft of shawl making have been opened by the Government in places like Ganderbal, Pulwana, Shopian & Budgam in Kashmir, in the quest of keeping this Art alive,” says Varuna Anand, Founder & Designer, The Splendor of Kashmir. 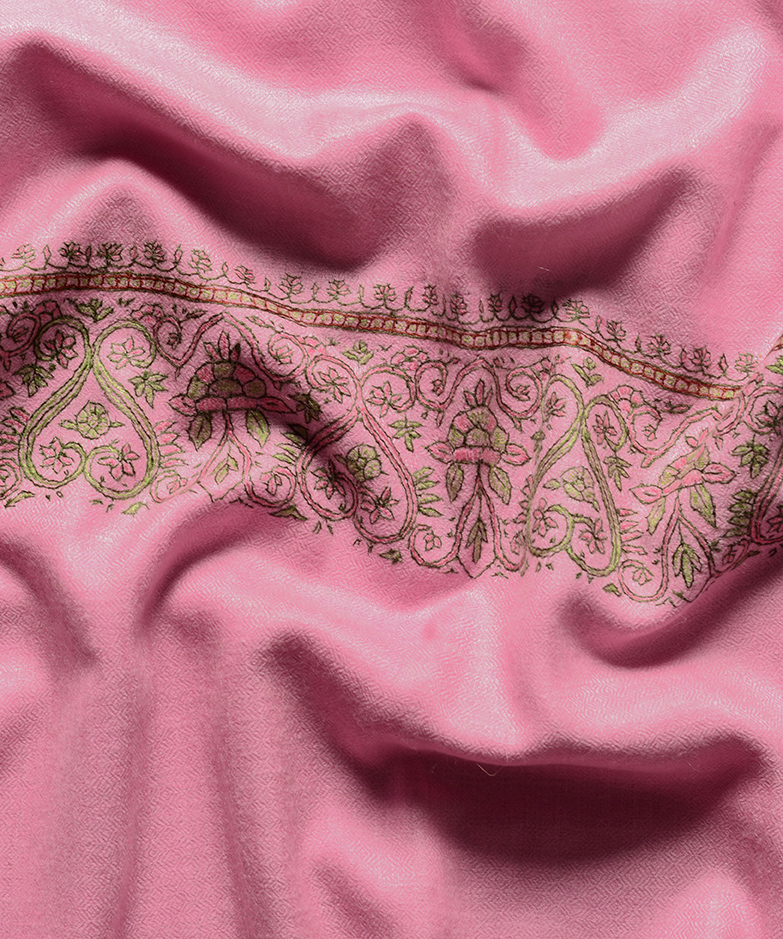 The key markets where Pashmina is exported are Italy, United States of America, United Arab Emirates, Switzerland and Thailand. Brazil, United States Of America, Canada were the leading Importers of Pashmina Shawl from India with a market share of 95.233% with a exports value of US$ 33.3 Thousand as per exports details released by India Custom export database. Brazil has a market share with 63.556% followed by United States Of America with 28.437% and Canada with 3.24% Anand says, “Pashmina being a luxury commodity always, the main markets where it is exported are in Europe. The requirement for head scarves and accessories made from Pashmina is there in the Gulf countries as well. The approximate figures in terms of exports of Kashmiri Handicrafts would be around 2,500 crores.”

The growing availability of cheap pashmina in the markets is what creates unhealthy competition and the growing market of fake pashmina, makes the original pashmina market at stake. Also the younger generation is not keen to continue with the craft. There is so much that needs to be done for the pashmina goats, their environment and their guardians. “Fair commerce needs to be encouraged for the entire value chain of the people associated with it so that the largesse does not remain entirely the traders. Improved designs need to be introduced to them so that there is a unique translation of the traditional art heritage. Certification of authenticity needs to be formulated and implemented with integrity and responsibility so that the hand spun and hand woven products retains its place of origin,  true nature and value against the machine made imitations,” opines Natasha Chaudri – Co-founder, YUMI. Bhavya Chawla, Chief Stylist, Voonik.com adds, “while the production capacity increases manifold there are questions that the quality of pure pashmina is being compromised as the fibres are very fragile and cannot withstand the force of a power loom. Nylon and other synthetic fibres are added during the spinning process to strengthen it. Also being a small scale industry, a few years back, it was hit by market slowdown and then by demonetization and now struggling with GST.”  However, today it is not just about weaving a pashmina shawl but bringing the same kind of craftsmanship this art is so known for. “These talented craftsmen still exist in the state and can produce admirable embroideries, which can be compared to the work produced maybe 50 years ago by talented craftsmen of the state. The endeavor to encourage such craftsmen and take their work to the right people is something which will eventually lead to the increase in demand of these goods, benefiting both the craftsmen and the handloom industry of the state,” concludes Anand. Considering that the art of Pashmina is not just intrinsic to India but also a source of livelihood for its dwindling artisans, it is indeed time to get our act together to save the craft and give it the importance it deserves.

This story first appeared in the Jan-Feb 2019 issue of here: Pashmina