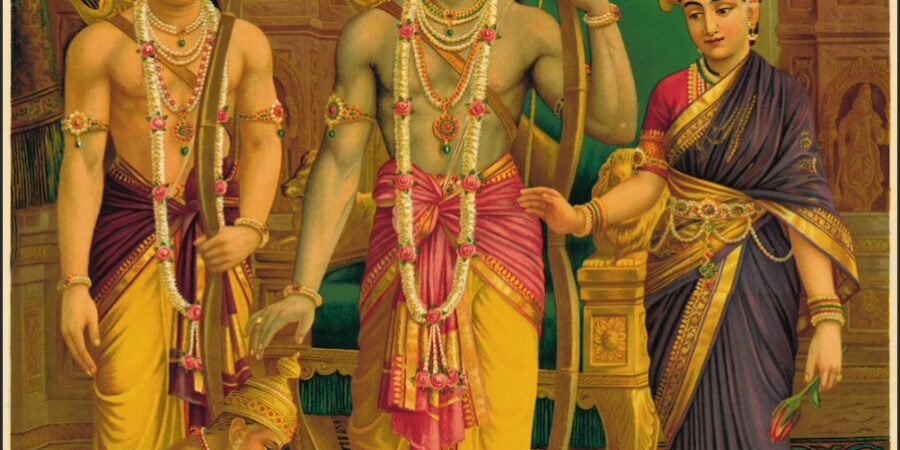 ‘Revelation & Reverences: Glimpses of Indian Art 1850 – 1950’ charts the evolution of India’s Art History from the mid-19th century to Independent India. This three-month long exhibition opens to the public on 9th December 2022 and will remain on view until 28th February 2023.

Unlike most shows at gallery g, this show will see a unique curation which will divide the gallery space into distinguished sections, each highlighting a different region and form of art.

Beginning with traditional Kalighat paintings, Early Bengal Paintings and chromolithographs from the Calcutta Art Studio, the exhibition journeys to Maharashtra where the works of important artists from the region are displayed.

The art journey continues to the southern parts of the country with focus on Travancore, where Western Academic style art by Raja Ravi Varma, Sekhara Warrier and Cheduvaranga Naidoo gained popularity. Traditional arts from Thanjavur met the modern mechanics of printing presses and the coloured boxes of Sivakasi through the hands of artists like C.G. Ramanujam and C. Kondiah Raju.

This electrifying and invigorating journey of the evolution of Indian art, from cave paintings done in natural colours to the world of oil paintings, portraits, prints, posters and calendars is all charted in this expansive and well documented exhibition titled ‘Revelation & Reverences’.

Beginning with Kalighat sketches and moving on to Early and Dutch Bengal paintings, modern interpretation of traditional art through Jamini Roy’s artwork, the Bengal journey also takes you through to a collection of works by latter day artists who persevere in the difficult art of Tempera on different mediums.

Interspersed between are some of the early chromolithographs of gods and goddesses, namely Sarasvati and Lakshmi, two deities whose depictions run as a common thread in the ensuing regions as new forms of art like oil paintings and chromolithography spread across India.

The Maharashtra journey takes you through the chromolithographs of popular gods and goddesses, before moving on to watercolour works by Jivaji Bhikaji Dikshit, a painter and illustrator, who became popular designing covers for religious books and magazines.

All through the common theme in this exhibit is stories and characters from the epics, save for the portrait study based on A.X. Trinidad’s work by current day artist Sunil Tambe. The parallel we draw to this portrait will become clear as you make your way into the next section, the

biggest and boldest of them all, showcasing original oil works, chromolithographs and other artefacts from Travancore.  Travancore The Travancore exhibit without doubt is the piece de resistance of ‘Revelation and Reverences’, featuring original oil paintings by the master artist and chromolithographs of some of his other works. It also showcases original paintings by his contemporaries or artists who evolved in what was to eponymously become the “Ravi Varma School of Painting”.

Stone blocks or litho stones, used for the purpose of producing chromolithographs, have been specially sourced and featured in this exhibit to give a better insight and understanding of how the prints were made from these blocks.

We not only trace the iconography of the deities, we also chart how the image moves from one medium to another emerging as antique terracotta dolls, borrowed ostensibly from Ravi Varma’s themes and iconography.

On loan from the collection of Ashvita’s, Chennai, these vintage dolls employ similar iconography as seen in paintings and the chromolithographs on display here.

As the name suggests, Tanjore painting is a classical South Indian painting style originating from the town of Thanjavur. The art form draws its immediate resources and inspiration from way back about 1600 AD, a period when the Nayakas of Thanjavur ruled the land.

It is chiefly characterised by Hindu religious subjects and is distinguished by its famous gold coating. In Thanjavur paintings, one can see the influence of the Deccan, Vijayanagara, Maratha and sometimes even European styles of painting. These paintings stand out for their rich and vivid colours, simple, iconic compositions, glittering gold foils overlaid on delicate but extensive gesso work and inlay of glass beads and pieces. On rare occasions, precious and semi-precious gems are also used.

Essentially serving as devotional icons, the subjects of most paintings are Hindu gods, goddesses, and saints. Episodes from Puranas, and other religious texts were visualised, sketched or traced and painted with the main figure or figures placed in the central section of the picture surrounded by several subsidiary figures, themes and subjects.

The artists belonging to Raju and Naidu community were originally Telugu speaking people from the artistically vibrant Rayalaseema region of Andhra, who moved to Tamil Nadu in the wake of the fall of the Vijayanagara empire and the establishment of Nayak rule in Madurai and Thanjavur.

The artists turned out a wide repertoire of paintings on different subjects and of varied quality depending upon the patron’s interest, urgency and most importantly influence and financial capacity.

However, the art was by and large a sacred task to be performed with a reasonable degree of ritual purity and humility by the master craftsmen, many of whom chose to remain anonymous and never signed their paintings, true to the Indian artistic tradition.

C. Kondiah Raju, the famous calendar artist from Kovilpatti, was one of the illustrious descendants from the Raju community to make a name as an artist during modern times.

In this exhibit, we take you through a journey of chromolithographs, the more difficult art of reverse glass paintings, before finally winding through to Mysore artisans, namely K. Kesavayya and G.V. Venkatesh Rao, both prominent artists in the court of Mysore.

In some ways, it is indeed ironic that Ravi Varma, who began his artistic journey being influenced by the Tanjore school of painting, would soon become the focal point of emulation for all contemporary artists in the latter part of the nineteenth and early twentieth centuries.

The Moving Image
If chromolithographic prints produced in foreign presses were a trickle in the late nineteenth century, it became a deluge in the early twentieth century as technologically superior prints flooded the market.

The commercial aim of the industry was to produce chromolithographic prints on a large scale portraying the deities and the mythologies of Hindu tradition to meet the burgeoning consumer demand for devotional images. As the imagery spread in the subcontinent and into Europe, chiefly, Germany, Italy and England, the visual representations changed. It wasn’t just subtle or stylistic, on the contrary, it was the artistic liberty of European artists, with little understanding of the Hindu traditions or iconography, that flooded the market.

From the myriad personal choices by consumers, some popular themes were regularly repeated; depictions of Krishna, Rama and other popular deities were high in demand. Paintings from artists like Bampada Banerjee in Calcutta, Vasudeo Pandya in Maharashtra to N. Gopal Rao from Mysore made their way to different parts of Europe where new machinery and newer techniques produced high-quality chromolithographs.

These were then dispatched back to India and sold at, surprisingly, cheaper prices than the ones made in the different presses in India.

The S.S. Brijbasi company was founded by two brothers Shrinathdasji and Shyamsunderlal Brijbasi, who ran a cotton yarn business and a picture framing enterprise in Karachi before moving into the business of publishing in the late 1920s. The brothers would constantly visit the town of Nathadwara, and enlist the services of the vibrant artistic community in the pilgrimage town.

In the colonial setting, nearly all the artists incorporated, consciously or otherwise. European artistic elements. Some had received training in art schools established by the British where they had been instructed in single-point perspective of ’realistic’ painting.

Other elements in the visual environment of colonial India also made an impact on the way the print artists portrayed the Hindu gods. From the popularity of theatre in urban India during this period and the rise of photography in India, artists borrowed poses, gestures, and new stage like-settings for the gods and goddesses.

This would soon resonate in the Indian film industry which exerted a huge influence on the depiction of the deities. At the same time, older conventions of iconography and well-known narratives retained their central role in the way deities were depicted. The result was a complex artistic synthesis, resulting from the cross-pollination of old and new, India and European, traditional and innovative, that would prove enormously popular throughout the subcontinent.

Read the full story that first appeared in The Chakkar here: