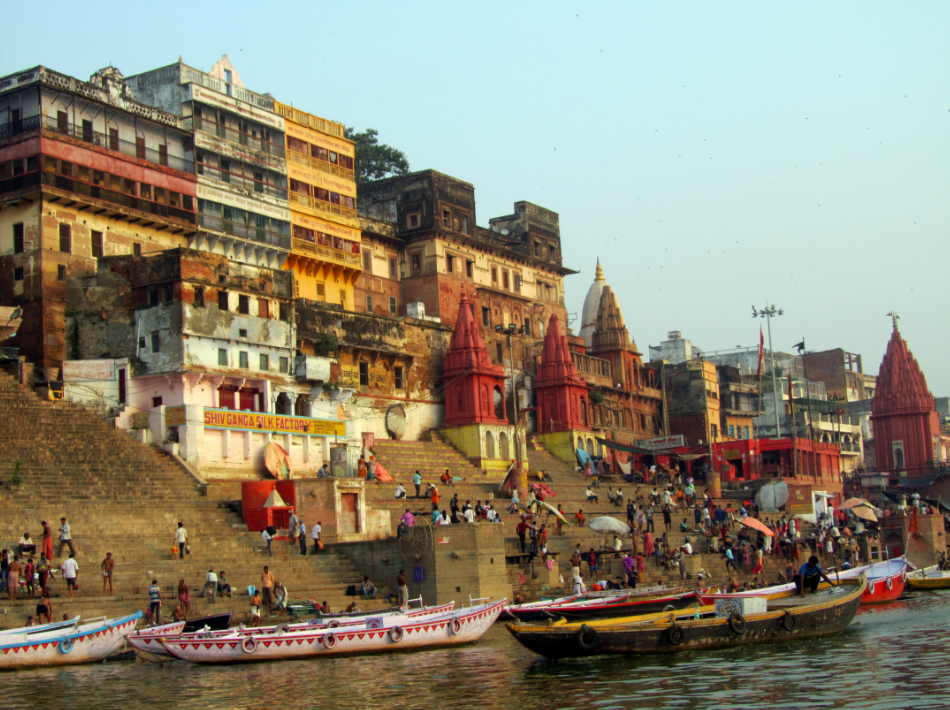 “Varanasi” is older than history, older than tradition, older even than legend, and looks twice as old as all of them put together” ~ Mark Twain

Varanasi also called Beneras and Kashi (the city of lights) has a spiritual history connected with Hinduism that dates back over 3000 years and is rightly referred to one of the oldest cities in the world. An eclectic mix of spirituality, tradition, culture and more, there is something that will appeal to everyone irrespective of caste, creed or religion.

It is 5:30 a.m. The air is crisp and I feel a slight nip as I am at the Assi Ghat for the morning Ganga arati. It is still quite dark but I see seven priests with a paraphernalia of prayer items getting ready to start the prayers. Shortly the prayers start with offering fire to the holiest river fondly called Mother Ganga or Maa Ganga. The synchronised ritual is a stunning spectacle that is inspires awe and spirituality at one shot. Steeped in devotion, the 45 minute ritual is accompanied with spiritual music and the best part is that young children are encouraged to sing here as well. It is a lovely showcase of young talent in music as part of the ‘subah-e-banaras’ or morning in Beneras (an alternate name for Varanasi also known as Kashi). The best part is how the colours change as the sun creeps out of the clouds and you can actually see different shades of the whole ritual playing out against the placid river waters. After this we decided to take a boat ride on the river and witness life unfold on the ghats (series of steps that lead you down to a river) here. There are 87 ghats along a close to 7 kilometre stretch that are primarily used for bathing, puja (prayers) and cremation. Coming back to the boat ride, you can firstly witness a magnificent sunrise on one end and see how people fill up the ghats performing rituals and soak in the atmosphere. And you even have vendors trying to sell you locally made handicrafts in adjoining boats here. The best way to understand the experience would be in the company of a local guide who can explain the history behind each of the ghats. After the boat ride, visit a local wrestling arena called Akhada and come up close with how wrestling is practiced traditionally. I checked out the Guru Gaya Seth Akhada where I saw wrestlers training hard in a traditional setup on soft mud (not carpets) and also doing rope climbing to build their core strength too!

The lifeline of Varanasi however is on its Ghats and if you want to experience the pulse of the city this is where you need to head to. A good idea is to walk around the narrow alleys, which will also give you an insight into the daily life of the locals. In fact there are guided heritage walks through Varanasi’s ghats, which were built under the patronage of the Maratha empire that take you through the winding alleys of the old city. Stroll through the atmospheric Vishwanath Galli and the Dal Mandi, a former red light area, now a bustling wholesale market. The principal ghats are the Dasashwamedh ghat where you can witness the evening Ganga aarti and Manikarnika ghat, a traditional cremation ghat. This is ghat that sees a lot of activity as it is believed that performing the last rites of the departed souls will give them a ticket to heaven. And to respect their grief, photography is not allowed at this ghat. However my guide rightly pointed out that although cremation related ceremonies are on, the people performing them have an almost beatific expression. Perhaps it is their way of connecting with the divine and also a stark reminder of the cycle of birth, death and rebirth. I suggest you do not miss the Scindia ghat with its beautiful sunken temple.

Varanasi is a city where you will find a temple in each and every nook you turn into. It is said that the city has several thousand temples but the one you must not miss is the Kashi Vishwanath Temple. This is by far the most revered temple in Varanasi and if you are not deterred by long queues you must head here. There is heavy security around this place and you are not allowed to carry any electronic devices inside. In fact there are lots of stores with “locker facility” where you will need to leave your things. So be prepared when you come here. This is one of the 12 Jyotirlingas of Lord Shiva and is thronged by devotees and the shrine is set in a large complex. There are several smaller shrines all around the sanctum sanctorum.  While you are here do visit the Benaras Hindu University, one of the country’s most storied educational institutions. I suggest you also visit a school of music and participate in a Hindustani classical music lesson. Varanasi is well known for its wooden lacquer ware toy industry and you can check the craftsmen at work in the narrow by lanes behind the Vishwanath temple. Walking through the arts and crafts heritage, you will come up and close with the sari and carpet weavers as well as working on the traditional gulabi meenakari work. But one thing you must not miss is to head to traditional weaving units where you can see how master craftsmen work on the traditional hand looms to create the world famous and beautiful Banarasi silk saris, scarves and home-decor items. With so many myriad experiences – the hustle and bustle at one end and the serenity at the other, it does seem like life does come full circle here.

Eat: Thandai a traditional local drink, Lassi, Benarasi Paan, traditional breakfast of kachori subzi and jalebis are some of the food items that you must try in Varanasi.

Stay: Varanasi has a whole lot of options from budget to luxury accommodation. For a real city feel, stay in one of the hotels around the ghats.

2 thoughts on “Varanasi – A Travelogue”

I spent some time at Awfis Gold co-working space i

Glimpses from my recent staycation at Signature Cl