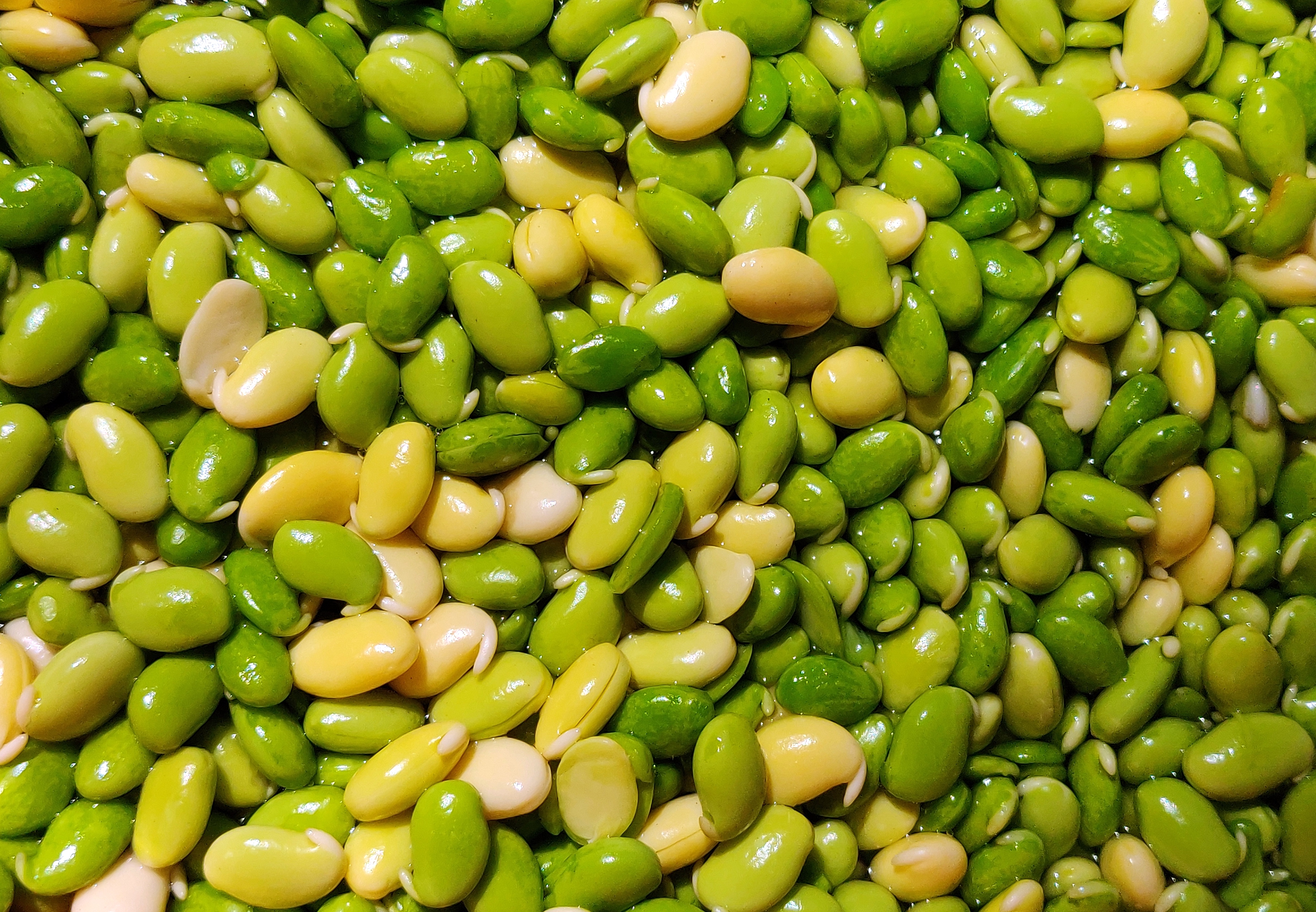 Come winter and Bengaluru is enveloped by Avarekai fever – the ubiquitous ingredient that makes it way into breakfast, lunch and dinner and as a starter, main course and a dessert.

Sogadu. This is the one word that every self-respecting Bangalorean will identify with. For the uninitiated, this word is synonymous with the Hyacinth beans or Avarekai the winter specialty of Karnataka. Sogadu refers to the quality of the bean that is usually harvested in the month of December post the 15-20 of the month when the bean is at its best – in terms of size, aroma and flavour. “Sogadu is determined by the weather and in fact we also have a spell of rainfall at this time post which the bean is harvested and we call this Sogadu Avarekai,” explains Chetan of Shree Vasavi Condiments. Incidentally it was his mother Geetha Shivakumar who started the annual Avarekai Mela in 2000. Her daughter Swathi who has taken charge now says, “initially my mother used to prepare a lot of dishes using Avarekai at home and sell them in her home store in Mavalli. In those days farmers would peel and sell Avarekai in VV Puram but the shelf life of Avarekai once peeled was one day and the unsold stock would be discarded which was a huge loss. That is when she thought of an Avarekai Mela to help the farmers. She called farmers from Magadi and started with 7-8 dishes and it has expanded to close to over 100 dishes. We have about 600 farmer families who are involved.” The 11 day mela is set to start at the end of December and the one new dish that will be launched this year is still under wraps. However you can still pick up a bunch of savouries from Avarekai chikki, Fried avarekai (variants include mint, garlic, pepper, Congress groundnut mix, Avalakki mix) Nippatu and even roasted avarekai at the store through the year.

Interestingly avarekai has made its way into restaurants and Chefs are wholeheartedly embracing the ingredient in a variety of dishes. Toast & Tonic, the international restaurant and bar in Bengaluru (part of the Olive group) has a seasonal small plate of Warm Beans with Avarekai Fresh Toor Beans – a salad of sautéed warm winter beans with Avarekai, sprouted mung beans and valor served with a light peanut dressing with Asian touch of lemongrass and ginger. “Avarekai is popular and widely available in the winter months and we serve it with an unpretentious take in a simple, fresh salad. The Avarekai is a beautiful yellowish green colour and is very easy to prepare. It lends a very subtle nutty flavour and texture to the dish. While hugely popular with local dishes in the winter months, this versatile and hugely popular bean was surprisingly never used in any fine dine restaurant menu and hence we thought it was a great opportunity to showcase this little beautiful indigenous ingredient in a salad. Avarekai is high in fibre and proteins which makes it very popular amongst the health conscious these days and is a perfect ingredient and addition to a winter salad,” says Chef Manu Chandra, Chef Partner at Toast & Tonic and Olive Beach. Besides this salad, Chef has used Avarekai to make falafel, as a puree with buckwheat batter crepes and in Flatbreads as well as a side or accompaniment that cohesively mixes with proteins like prawn and lamb in bespoke and tasting menus, this time of year. Chef Kasiviswanathan M, Executive Chef and Director Food & Beverage, Radisson Blu Atria adds, “the Averai Biriyani we make is prepared by cooking the rice using the water in which the avrekai is boiled which lends a subtle flavour to the dish. The Halwa was also made for the element of surprise most people do not expect avrekai to be the base of a sweet dish and when the paste is mixed with jaggery it takes the dish to a different level.”

As an ingredient that finds its way into every dish in the winter, Avarekai is quite like no other. From idli, dosa, upma, mixed rice, rasam, sambhar, bisi bele bath to even sweets – it is omnipresent. In fact shelling it and peeling the skin are major activities in many households. Nanda Prasad, a 56 year old housewife recollects that when she was growing up in Seshadripuram in Bangalore, she and her sister would have a competition as to who would have more numbers of peeling the skin of Avarekai. “We had an open courtyard where we would do this and we would also feed the sparrows and the worms with the beans. And once we were done we would look forward to eat the huli or sambhar made from the deskinned beans.” There is certainly no better leveler than food and Avarekai is a perfect example of the same. So the next time you are in Bangalore make sure you try the bean for yourself. 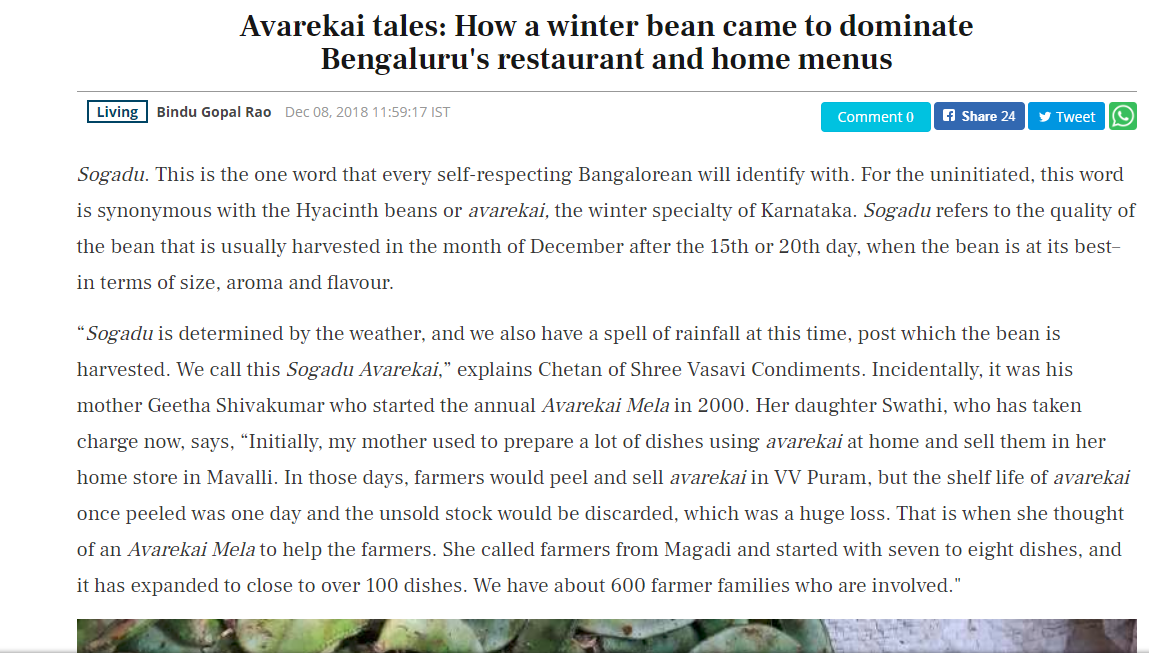