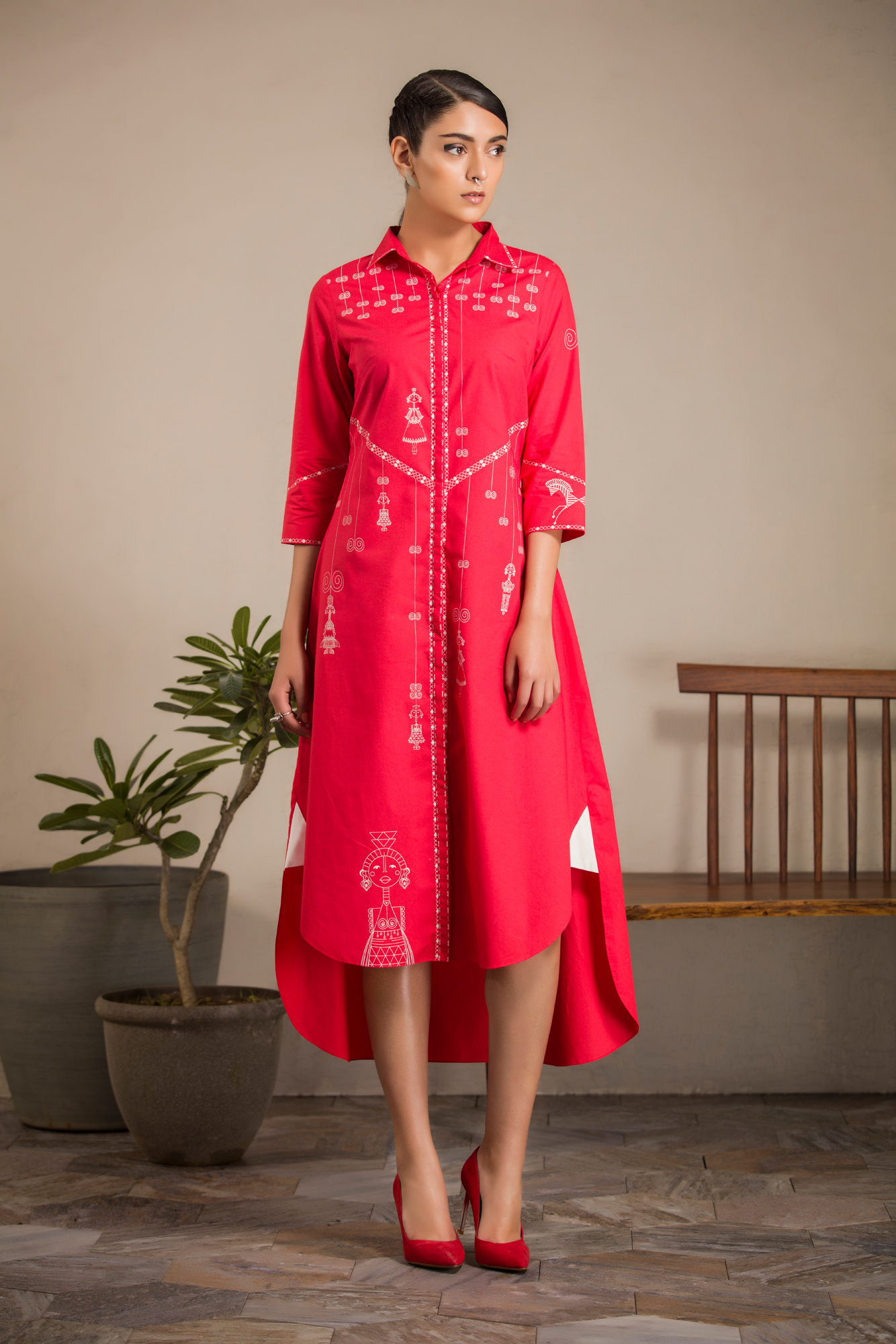 Apparel in India is a huge market simply because of the massive numbers. There is also a difference in the way that people dress especially women based on the city where they live. However this difference is slowly vanishing and women in Tier 2 and Tier 3 cities are also dressing like their counterparts in Tier 1. If you are wondering what is the reason for this change, read on. Over the past years, everything has changed especially when we are talking about Indian culture no matter whether you are in Delhi or Kolkata or even Bihar people have switched from Indian sarees suits to western clothing.

What appeals most to the global fashion culture as far as India is concerned is, “Indian beautiful and fashionable woman.” Today’s Indian woman, hailing from metro cities as well as tier 2 and3 cities, is self-styled, confident and independent. There is a drastic change not only in her body language but also her clothing style. “With the changing time, number of working women has increased and this has given them more freedom to spend on their clothing.  Following the rise of the internet and smartphone usage, more women living in tier 2, 3 cities, are now able to stay au courant of latest fashion trends, and have become smart consumers who know what they want,” avers Naina Jain, Owner/ Founder, Naina Jain. The saree, which was considered regular wear at one point, has now morphed into occasion wear. Not just the cities, even the women in the hinterlands today have exposure and access to fashion, thanks to their mobile phones that open up the gates to the internet and e-commerce. Even though the interpretation of ‘modern’ in rural areas might be restricted to teaming a kurti with a pair of jeans, there is a definitive change in the way clothing is being perceived – it is not traditional anymore. Manjaree Pathak Banerjee, Director, UR Style File says, “with the opening up of mall culture, the cities have adapted to the western culture very easily. Even in the rural India, the Indian wear has replaced by the more western tunics and jeans. Perhaps convenience is to be also taken into account-where the customer has surrendered to his/her convenience.”

According to a study by Naina Jain making a strong case for tier II and III cities, factors like international airport connectivity across cities such as Lucknow, Kochi, Bhubaneswar, Nagpur to name a few, rising levels of disposable income have prompted various global and local brands to plan their expansion plans in these cities. It has been seen that with changing times, even the most traditional apparels have been modified to hold an urban look without compromising on tradition. Manish Dhawan, CEO & Founder, Beyond Pink avers, “after critically evaluating the kind of clothes women prefer in Tier 2 & 3 cities I examined that Indo-western clothing has become a trend now. Wearing jeans, t-shirts, miniskirts especially party or evening gowns, have become common among every Indian girls now. As per the survey conducted by Fashion Forward 2020 in <arch 2017, the demand of western clothes will rise by 60-70% in market which is 4x growth by 2020. As per the survey statistical growth of Beyond Pink, is has a vision for 100% growth all over India and abroad in next 5 years.” Priyanka Modi, Designer, AM:PM by Ankur and Priyanka Modi explains, “over the years, increasing personal disposable incomes, a young population and instant access to global fashion trends have resulted in the gradual rise of aspiration amongst Indian consumers. I truly believe that fashion is a primary indicator of the zeitgeist. It reflects the way we live, think, and believe – at home in environments outside of it.”

One of the big drivers of this change is e-commerce that has not just reached the tier 2 and 3 cities in India but is transforming it by giving small-town residents an opportunity to buy goods online at a cheaper price than the local market. It also provides remote areas with big-city conveniences and the latest products. Contemporary fashion items that cannot be found in town are easily shipped. Moreover, more and more brands are looking to increase the penetration of its smaller format retail stores in tier II and III cities in a bid to increase their total sales.  With financial independence and freedom to make their own decisions, the residents of smaller towns and cities, are key for the growth of fashion as an industry in India. Increasing household disposable income is an added catalyst for the growth of value added products in the fashion space. The aspirations of Indian consumers has enabled the shift from “need” to “want” and the increase in the share of wallet for discretionary spending has empowered the local people to spend more on fashion. Soma Banerjee, Director, UR Style File adds, “I think the purchasing power amongst the mass remains same because it got neutralized with higher expenses. Perhaps smart phone has done the trick-ecommerce is just a click away. More and more e-portals are giving this option to replace incase it does not fit or it is not liked, so the damage is not borne by the client and moreover it is at the convenience of sitting at home and paying through COD at a much-much cheaper price.” Digitalization of fashion along with multiple touchpoints of content consumption has changed the fashion landscape in tier 2 and 3 cities. “Decisions related to fashion are made based on the milieu which is increasingly being influenced by international trends along with a TG that is more fashion conscious. This change is further fueled by a rise in purchasing power and brands increasing their footprints in tier 2 and 3 cities, making the latest trends more accessible to consumers there,” says Srinivasa Rao, Sr. Vice President, Marketing, Lifestyle. Likewise social media awareness is also contributing to a spiked demand. Designer Bhumika Grover says, “I would say definitely social media has played an important part in evolving fashion sense and with so many young new age designers coming in the whole concept has changed, people understand less is more and it’s not just the clothes but also the accessories that play an important part in the whole look.”

India is a geographic location, which consists of a mixture of people from different cultures and religions, settled in various cities, towns and villages. Initially, the sense and style of fashion varied on the basis of their surroundings. But, with the rise in technology, income and other factors, people hailing from tier 2 and 3 cities have adapted themselves in wearing western clothes but, the ethnic form isn’t far behind too. But, the country most certainly has seen an evolution of western wear and the market is growing by the day. The market for women’s wear in India has probably become extremely lucrative in terms of variety and scope. This has been the key reason for international brands to focus on the immense potential for growth in this segment. The millennial women are very adaptable to changes and they love experimenting with anything that is new and attractive. The overall women’s wear market in cities as well as smaller towns is heavily dominated by ethnic wear like sarees. Casual wear brands are taking note of the rising interest in western clothing in these areas. So they are coming up with a mix of ethnic and western wear that is the fusion wear to fulfill the dual demand. “For example, denim along with a straight Kurti with a high waist slit to complete the fusion look. Once considered a niche market, the Indo-western fusion wear segment is witnessing double digit growth. Further tweaking the product to appeal to the sensibilities of the young Indian women in tier 2 and 3 cities, will go a long way in differentiating and not merely being a me too brand,” says Jain. Designer Hema Kaul opines, “denims are very popular. Globalization has also impacted the way women dress, as women are more fashion conscious and more aware of their fashion trends and styling. There is also a huge demand for western wear amongst women. Women are looking for fusion wear, Indo western and ethnic all kinds of apparel.” The dynamics of women’s wear are certainly changing and this is auguring well for manufacturers and consumers alike.