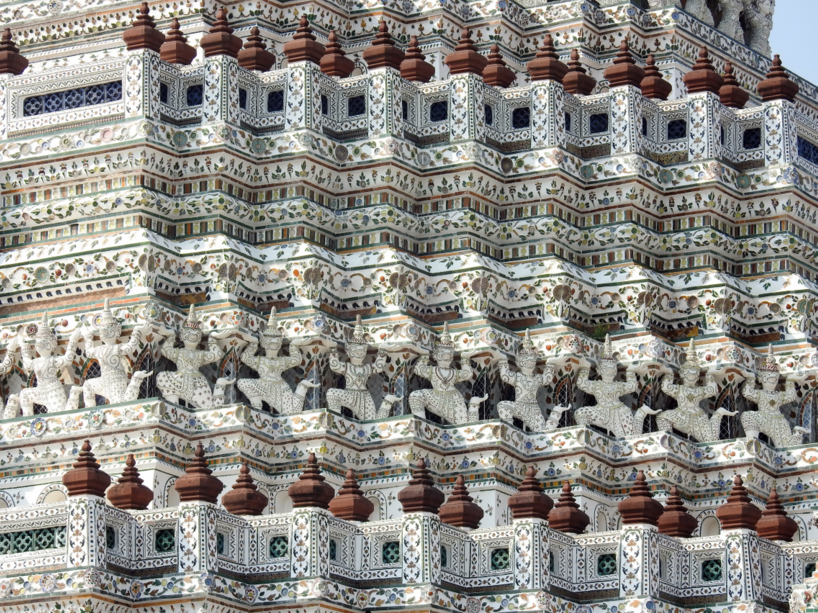 Think Bangkok and probably you are thinking traffic jams and a noisy urban setting. Well, that might be partially true, but this metropolis is much more than that.

On a recent first visit to Thailand’s capital city I was pleasantly surprised to see several aspects of the city that are seemingly hidden under the bustling metropolis. Yes, the city is full of energy courtesy its people and tourists who seem to throng the place, but look beyond and you will find many things that will catch both your interest and fancy.

I decided to start my Bangkok sojourn on a positive note and headed to Wat Arun, the Buddhist temple of dawn. Named after the Hindu God Aruna, personified as the radiations of the rising sun, the pearly iridescence of the morning rays on the pearly white façade is unmissable. After reaching the location, a short ferry ride took me to the temple. Even as I hopped on to the boat I was quite awestruck seeing the majestic beauty of the white hued conical spiral structure ahead. Located on the bank of Chao Phraya River the temple is set amidst beautifully landscaped gardens where the bird song is unmissable. The 70 metre high spire is fully covered with tiny pieces of coloured glass and Chinese porcelain in intricate designs. There are many stairways that go up and down here and it is impossible not to admire the façade with detailed mosaic murals and statues of Chinese soldiers and animals. You cannot go inside but there is so much to see all around that you will not mind. The temple itself dates back to the 17th century but the spires were built by King Rama II in the 19th century.

Right opposite to this temple on the road side is Wat Pho, the Temple of the Reclining Buddha. Well known for its giant reclining Buddha measuring a whopping 15 metre tall, 46 metre long and covered in gold leaf, the 5 metre long feet have mother-of-pearl illustrations. You can also buy a bowl of coins at the entrance which must be dropped in the 108 bronze bowls place next to the wall for some good luck. Of course even if not for that, this money helps to preserve and renovate and preserve Wat Pho. Ensure that you take off your shoes and wear appropriate clothing that covers your shoulders and legs before you enter inside.

Once dine with my spiritual explorations, I headed to Jim Thomson Museum which is called The Jim Thompson House, the home of James H.W. Thompson, a self-made American entrepreneur and founder of Jim Thompson Thai Silk Company. He is said to be the person who took Thai silk to the world. Curiously in 1967, he went on a holiday to the Cameron Highlands in Malaysia but never returned from a walk. His house has now been converted to a charming museum. This Thai style structure is nestled in a complex with six traditional Thai-style houses built with teak wood and was completed in 1959. A guided tour will take you through the two stories home set amidst a lush garden where you can see how he lived. The original furniture all in teak wood is still here maintained in immaculate condition. Statues of wood carved Buddha, Belgian chandeliers, porcelain sets, Italian marble tiles and a collection of art and antiques are all here.

After this I head to the Madame Tussauds museum, known for its world famous wax superstars. An interactive space you can actually set next to Oprah Winfrey ala The Oprah Show, practice Kung Fu with Bruce Lee, drink an espresso with George Clooney, or pose with your arm on Mao Zedong’s shoulders. The ten exhibit rooms have very realistic statues of Lady Diana, Queen Elizabeth, Mao Zedong, Pablo Picasso, Dr. Porntip Rojanasunan, Barak and Michelle Obama, Aung San Suu Kyi and the Dalai Lama among others. Being in the Kingdom of Thailand, this museum also has wax figures of Prince Mahitala Thibed Adulyadej and Princess Srinagarindra in the Royal Room. While you are here do not miss the 4D show, I happened to watch an Ice Age one complete with bursts of water and froth like snow that was good fun.

While the city of Bangkok is known for its glitzy nightlife, amazing food and shopping experiences, there is also a lot of focus on the traditional art and crafts. And this was exactly what I saw at Nakhon Pathom when I visited the Sookjai Organic Farm for a tour of their farm, Rose garden and Thai Village. The farm is an organic one certified by IFOAM, EU and COR and you take a boat ride across the river on the Sampran Riverside to walk through a vegetable and herb garden that grows organic vegetables, fruits as well as Thai staples like Kaffir lime, lemon grass and galangal. You can also sample seasonal fruits and homemade herbal teas and also actually have a meal cooked with all organic produce – a true farm to fork experience. In fact the farm works with a clutch of organic farmers as part of its community and even hosts a market for them to sell their produce. Interestingly you can see the entire traditional weaving process, traditional pottery, umbrella painting as well as a demo of Thai music and dance. In fact you can also try your hand at vegetable carving, string flowers in a beautiful arrangement and also learn a thing or two about Thai boxing. An immersive experience this is really the best way to come up and close with the rich traditions of the country. My visit to Bangkok was extremely insightful and interesting and the potpourri of experiences certainly makes this trip very memorable. 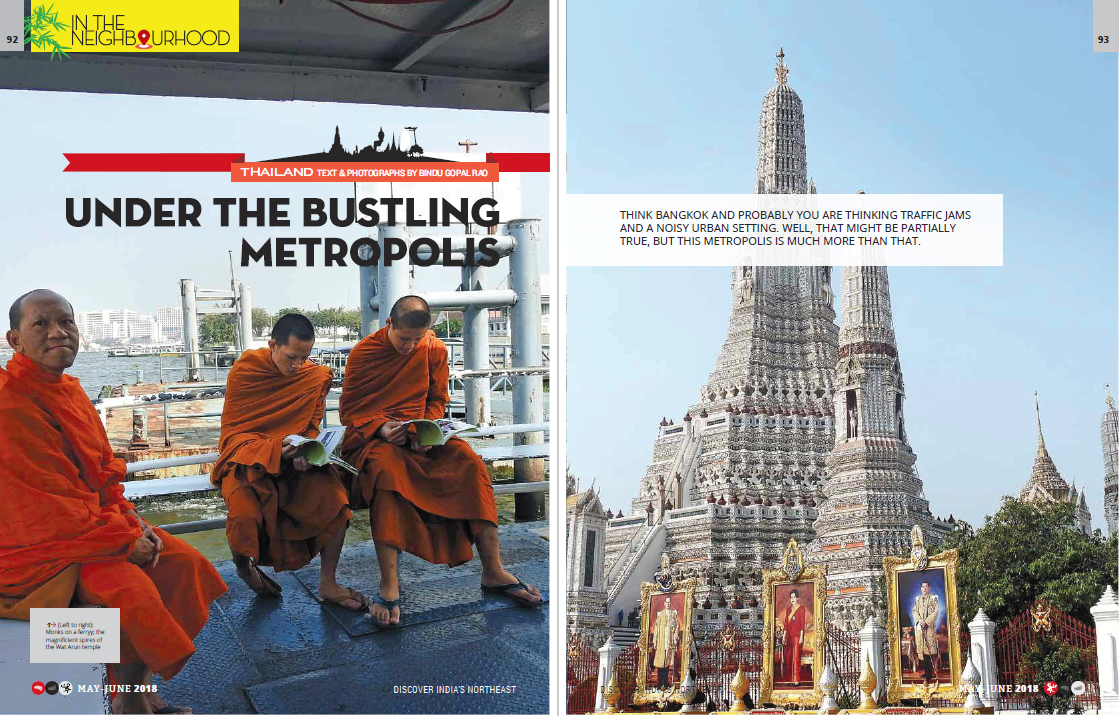 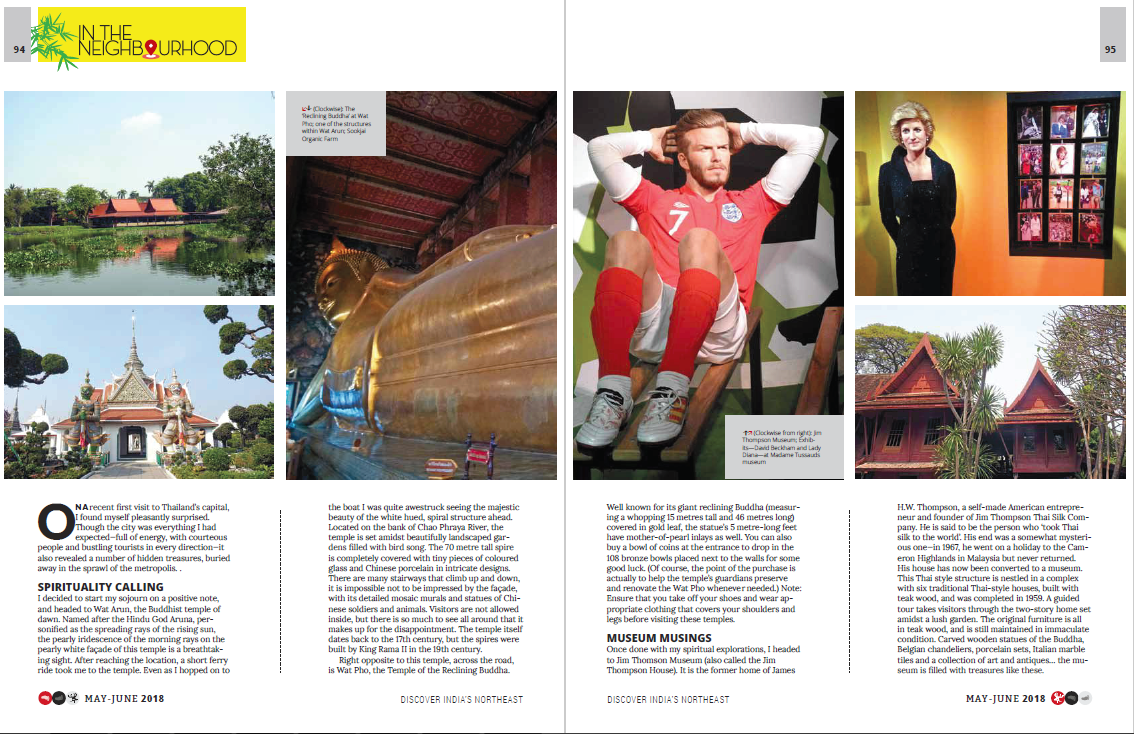 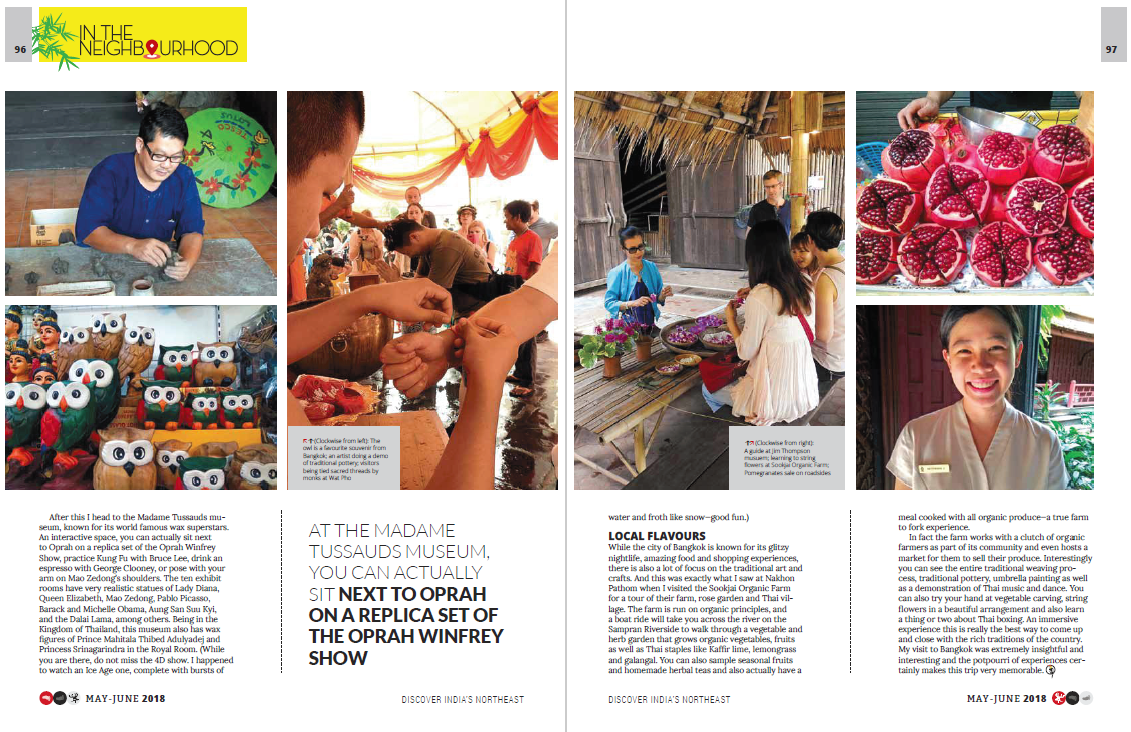