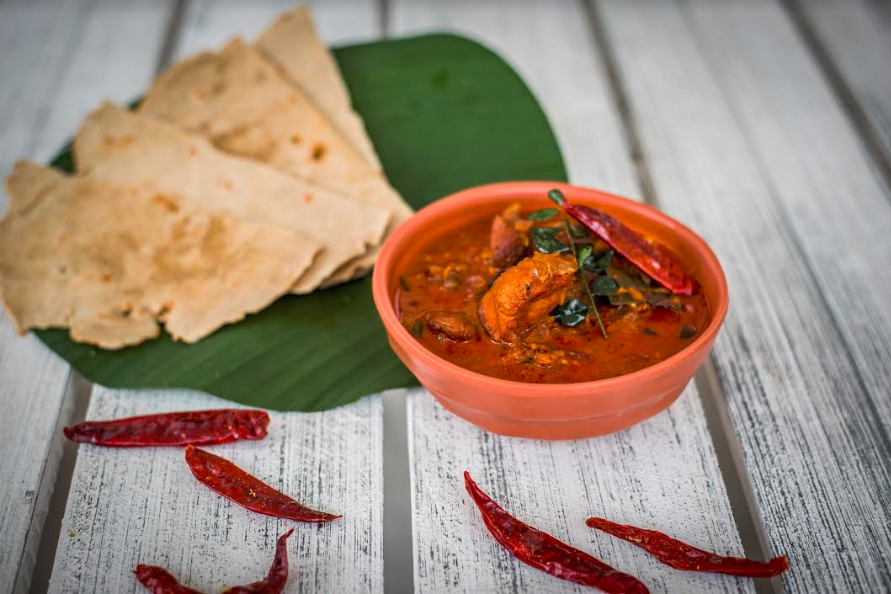 The cuisine of Telangana is known for its vibrant spice levels including the fiery chilly that literally packs a punch into each dish it is used in.

If you are an aficionado of food, the cuisine of Telangana will tantalize your taste buds and take it on a culinary journey like no other. The youngest state in India which was part of Andhra Pradesh has a palate that is bursting with flavours – old and new.

Telangana cuisine is about a mélange of robust flavours which uses chilies and spices. The food of the region is one of the spiciest in the world. A dry preparation is called ‘vepudu’, curry is called ‘koora’ and gravy made of tomatoes and tamarind that adds as a sour flavour is called ‘pulusu’. A deep fried reduction of the same is called Vepudu. Kodi pulusu (chicken gravy) and Mamsam (meat) vepudu are popular non vegetarian options. Some of the vegetables used extensively include eggplant (vankaya), ridge gourd (beerakaya), bitter gourd (kakarakaya), sweet cucumber (dosakai), ivy gourd (dondakaya), okra (bendakaya), colocasia (chama gudda) and drumstick (munagakaya). There is liberal use of green leafy vegetables such as spinach, bachali kura, tota kura, gongura and the like. “The food is made robust with liberal use of spices and green chillies. The food is made with locally sourced ingredients commonly found in the region. Tamarind, curry leaves and mustard seeds are widely used in food preparations. Telangana region is famous for its chilies (mirpakaya). Guntur chilies are widely grown in Telangana along with Raja and Teja cultivars. Fish (chapa), chicken (kodi), prawn (royala) and lamb (mamsam) are also consumed in large volumes. Jowar, bajra and ragi are also used extensively,” says Chef Yogen Datta, Executive Chef – ITC Kohenur. Telangana has a distinctive cuisine and being a semi-arid place millets are the staple food here. “There is special place for roti’s made from millets, such as jonna rotte (sorghum), sajja rotte (penisetum) and Sarva Pindi and Uppudi Pindi (broken rice). Popular Telangana curry dishes include Boti (derived from mutton) and Thunti Koora made out of Red Sorrel leaves. Potlakaya pulusu or cnake gourd stew is a staple dish while Sakinalu, a snack made from rice flour during festivals is popular,” says Ankush Sharma, General Manager, Aditya Park – A Sarovar Portico Hotel.

Telangana produces javar, bajara, chilies, sunflower, peanuts, paddy etc. They are prominently used in various dishes and in various forms. This cuisine has evolved over the years creating its own identity amongst Andhra, Rayalseema and Hyderabadi cuisine. “Another unique section of the cuisine is ‘pappu’ which is lentils paired with many vegetables and used in every day meals. One cannot end the Telangana cuisine conversation without pacchi pulusu a gazpachio style cold soup made out of tamarind and is heavily spiced with chilies. Also as mentioned tasty chutneys from Telangana can’t be missed out, some popular ones are Vankaya pachadi, dosakaya pachadi,  gongora pachadi etc. The cuisine also celebrates it tradition of some unique non-veg pickles such as Mamsam, Kodi and prawn,” says Varun M.B, Executive Chef, Novotel Hyderabad Airport. Mahesh Padala, Executive Chef, The Westin Hyderabad Mindspace adds, “two varieties of chilies  are cultivated in the region i.e. Hindpur chilli and Guntur sannam which are spicier compared to Bird’s eye chilli (Mizoram & Manipur), Byadagi (Karnataka), Ellachipur sannam (Maharashtra), Jwala (Gujarat), Kanthari white (Kerala and Tamil Nadu), Kashmiri chilli (Himachal Pradesh, Jammu & Kashmir) and G.T.Sannam (Madhya Pradesh). Tamarind: – Varieties of tamarinds available include PKM, Urigam, Hasanur, Tumkur Prathisthan, DTS and Yogeshwari. Urigam type of Tamarindus indica is preferred in the preparation of sambar and rasam in this region’s cuisine.”

Unlike other parts of the country the invaders in the respective regions have left their mark on the cuisine culture and traditions of those places. In spite of being under occupation by foreign rulers for more than 600 years, the cooking practices, culinary traditions and customs were hardly altered and are intact. Farm to plate is what Telangana cuisine is all about. Freshness is the key, locally available and sourced ingredients are the foundation of the dish. Only method of processing applied to the ingredients which go into the forming of the sauce is ‘Dhanchudu’ literally means pounding weather the ingredient is in the dry form or fresh form. Chef Thimma Reddy, Executive Chef, The Park Hyderabad says, “cooking techniques like slow cooking, locally sourced ingredients, less handling of ingredients, gravies are thin and not paste like and more on the watery side. Ingredients in a dish are well balanced never dominating.” If you love food and are looking for something that is a burst of flavour and packs a punch your go to cuisine is what Telangana offers. So get set to take your taste buds on a gastronomically vibrant journey like no other.

For the spice paste

For the spice paste:

This story first appeared in the Nov 2018 issue of Spicejet’s Spice Route here: